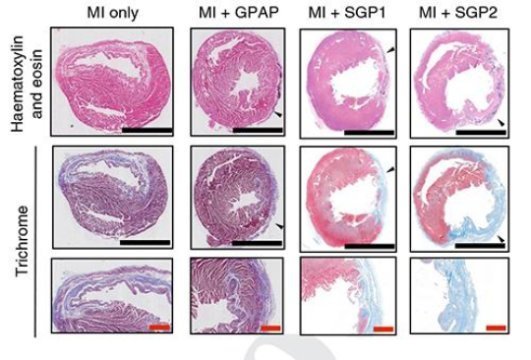 Researchers have designed a new type of adhesive patch that can be placed directly on the heart and may one day help to reduce the stretching of heart muscle that often occurs after a heart attack.

The patch, made from a water-based hydrogel material, was developed using computer simulations of heart function in order to fine tune the material’s mechanical properties. A study in rats showed that the patch was effective in preventing left ventricle remodeling — a stretching of the heart muscle that’s common after a heart attack and can reduce the function of the heart’s main pumping chamber. The research also showed that the computer-optimized patch outperformed patches whose mechanical properties had been selected on an ad hoc basis.

“Part of the reason that it’s hard for the heart to recover after a heart attack is that it has to keep pumping,” said Huajian Gao, a professor of engineering at Brown and a co-author on the paper. “The idea here is to provide mechanical support for damaged tissue, which hopefully gives it a chance to heal.”

Prior research had shown that mechanical patches could be effective, the researchers say, but no one had done any research on what the optimum mechanical properties of such a patch might be. As a result, the thickness and stiffness of potential patches varies widely. And getting those properties right is important, Gao says.

“If the material is to hard or stiff, then you could confine the movement of the heart so that it can’t expand to the volume it needs to,” he said. “But if the material is too soft, then it won’t provide enough support. So we needed some mechanical principles to guide us.”

To develop those principles, the researchers developed a computer model of a beating heart, which captured the mechanical dynamics of both the heart itself and the patch when fixed to the heart’s exterior. Yue Liu, a graduate student at Brown who led the modeling work, says the model had two key components.

“One part was to model normal heart function — the expanding and contracting,” Liu said. “Then we applied our patch on the outside to see how it influenced that function, to make sure that the patch doesn’t confine the heart. The second part was to model how the heart remodels after myocardial infarction, so then we could look at how much mechanical support was needed to prevent that process.”

With those properties in hand, the team turned to the biomaterials lab of Lei Yang, a Brown Ph.D. graduate who is now a professor at Soochow University and Hebei University of Technology in China. Yang and his team developed a hydrogel material made from food-sourced starch that could match the properties from the model. The key to the material is that it’s viscoelastic, meaning it combines fluid and solid properties. It has fluid properties up to a certain amount of stress, at which point it solidifies and becomes stiffer. That makes the material ideal for both accommodating the movement of the heart and for provided necessary support, the researchers say.

The material is also cheap (a patch costs less than a penny, the researchers say) and easy to make, and experiments showed that it was nontoxic. The rodent study ultimately showed that it was effective in reducing post-heart attack damage.

“The patch provided nearly optimal mechanical supports after myocardial infarction (i.e. massive death of cardiomyocytes),” said Ning Sun, a cardiology researcher at Fudan University in China and a study co-author. “[It] maintained a better cardiac output and thus greatly reduced the overload of those remaining cardiomyocytes and adverse cardiac remodeling.”

More testing is required, the researchers say, but the initial results are promising for eventual use in human clinical trials.

“It remains to be seen if it will work in humans, but it’s very promising,” Gao said. “We don’t see any reason right now that it wouldn’t work.”