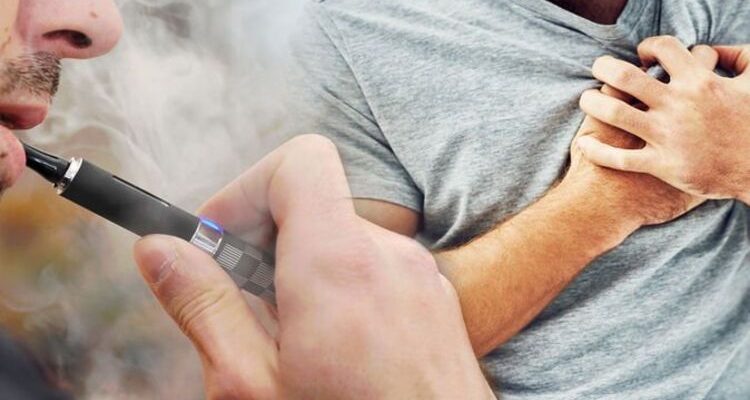 There are several habits that can put you at higher risk of heart disease. Risk factors are conditions or habits that increase your risk of developing a disease. Currently, the British Heart Foundation (BHF) says that healthcare costs relating to heart and circulatory diseases are estimated at £9billion each year. A new study has shed some light on the long-term impact of vaping for poorer function of the heart, particularly for men.

A world-first study delving into the long-term impacts of vaping has found a shocking link to poor heart health in men.

The study, published on Monday in a journal by the American Heart Association, tested how adolescent mice responded to e-cigarette aerosol.

It showed vaping had a significant negative impact on the cardiovascular system of adolescent males but not females.

Lead researcher from Ohio State University College of Medicine, Loren Wold, said it was important to conduct the research because not enough was known about how vaping impacts young people.

“We don’t know the long-term effects of vaping because it’s only been around since the early 2000s,” she said.

“We haven’t had the time required to see what happens, especially with adolescents. To our knowledge, this is the first study to evaluate cardiac function in adolescent mice exposed to e-cigarette aerosol.

“These types of studies give us an idea of the dangers of vaping so we can develop therapies as well as inform parents and public policymakers on the risks of vaping.”

The study was conducted with mice which were the human equivalent of 12 years of age.

They were exposed to a mixture of propylene glycol and vegetable glycerin and nicotine and monitored until they reached the human equivalent of 30 years of age.

The team found males suffered over time from reduced heart function but females did not.

Part of the reason for that was that females had more than men of one particular enzyme that breaks down nicotine.

“We were shocked at the amount of protection afforded to females,” added Wold.

“The theory is that since the enzyme breaks down nicotine so much faster, the nicotine isn’t in the circulation as long and that may be why females exhibit protection from vaping.”

The study findings come after it was revealed a Queensland man died of a severe lung injury likely caused by vaping.

Electronic cigarette vaping has been proposed as a safer alternative to tobacco cigarette smoking, however, this remains controversial due to a lack of long-term comparative studies.

Studies have previously found that while electronic cigarette vaping-induced abnormalities were seen in the absence of nicotine, these occurred earlier and were more severe with higher nicotine exposure.

Thus, long-term vaping of e-cig can induce cardiovascular disease similar to tobacco cigarette smoking, and the severity of this toxicity increases with exposure duration and vape nicotine content.

E-cigarette exposure led to the onset of cardiovascular disease similar to that with tobacco cigarette smoking.

It was also found that vaping increased the onset of systemic hypertension and subsequent cardiac hypertrophy.

The NHS states: “In the UK, e-cigarettes are tightly regulated for safety and quality.

“They’re not completely risk free, but they carry a small fraction of the risk of cigarettes.”