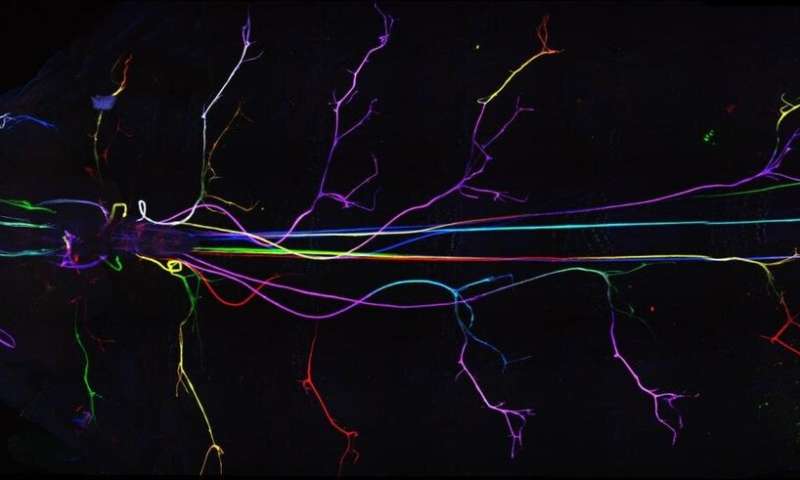 For the brain to work efficiently, it is important that a nerve impulse arrives at its destination as quickly and as precisely as possible. It has been long been known that nerve fibers—also known as axons—pass on these impulses. In the course of evolution, an insulating sheath—myelin—developed around the axons which increases the speed of conduction. This insulating sheath is formed by the second type of cell in the nervous system—the glial cells, which are one of the main components of the brain. If, as a result of disease, myelin is depleted, this leads to neurological disorders such as multiple sclerosis or morbus Charcot-Marie-Tooth.

Researchers at the University of Münster have discovered that glial cells not only control the speed of nerve conduction, but also influence the precision of signal transduction. In the absence of these insulating sheaths, short-circuit-like processes occur, which influence the accuracy of the stimulus transmission. The research results have been published in the journal Nature Communications.

Glial cells are not only indispensable for providing energy—they also have a broad range of other tasks in the brain. They are responsible for transport of metabolite and xenobiotics, regulating fluid exchanges, and maintaining ion homeostasis. In order to better understand the importance of glial cells for neuronal signaling, a team of researchers headed by Prof. Christian Klämbt at the Institute of Neuro- and Behavioural Biology at the University of Münster studied changes in behavior after the induced activation of individual neurones in fruit flies (Drosophila melanogaster). “For this purpose,” says Christian Klämbt, “we either removed individual glial cells from the nervous system or specifically disturbed their development concomitant to a light-induced, optogenetic, neuronal activation.”

As a result of these activities, the researchers were first able to ascertain that glial cells control the radial growth of the axons. Smaller axons have, as expected, a slower conduction speed—which was determined by electrophysiological measurements in a collaboration with colleagues at the University of Bonn. Astonishingly, it became apparent that a slower conduction speed does not lead to any change in movement behavior. The more important contribution made here by glial cells is the formation of membrane processes between individual axons—which prevents electrical coupling (i.e. short circuits) and thus makes a decisive contribution to the precision of neuronal signaling. The researchers undertook a detailed analysis of larval locomotion by means of a special custom made device. The development of the so-called FIM (Frustrated total internal reflection-based Imaging Method), together with self-developed software, allows a high-resolution depiction and analysis of movements made by even minute organisms. This led to a spin-off being set up—the “qubeto” company—which now continues the development of this technology and makes it available to the scientific community.