The producer of high-tech laboratory systems, KNAUER Wissenschaftliche Geräte GmbH was awarded the prestigious Innovation Prize for the Berlin Brandenburg region for their new system for the production of lipid nanoparticles (LNPs). 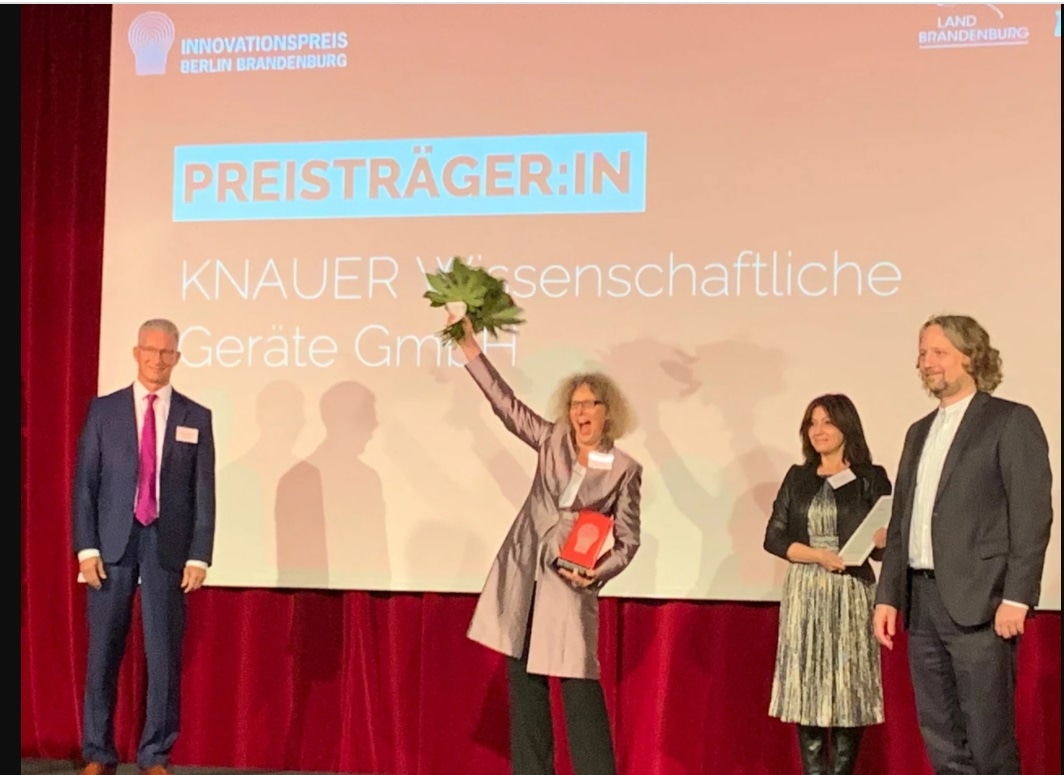 The systems, developed and manufactured in Berlin, play a key role in the production of the mRNA vaccines used in the fight against coronavirus. The systems, designed by KNAUER alongside a well-known pharmaceutical company, facilitated for the first time the production of mRNA lipid nanoparticles at large scale – as required to meet the need for vaccine production at a worldwide scale.

Berlin‘s State Secretary for economy, business and energy in Berlin, Christian Rickerts, Brandenburg‘s Minister for economy, work and energy, Jörg Steinbach, and the managing director of the Association of Business Associations in Berlin and Brandenburg e. V. Sven Weickert praised the quality of the 168 applications for the innovation award and congratulated the winners.

They emphasized the positive contribution of the award both to the award winners and to the region as a whole, because successful innovations such as these also create additional high-quality jobs.

As Stephan Hoffmann, from the Investment Bank of Berlin, presented the Award the joy on the faces of KNAUER’s owner and CEO, Alexandra Knauer, and business development manager, Lilit Avagyan, was obvious.

“The fact that we received the Berlin Brandenburg Innovation Award for our systems for lipid nanoparticle production makes me very proud of our entire team at KNAUER. During the development stage, time was running out, because what could an approved corona vaccine have achieved if there had not been systems for the production of LNP for the millions of doses that we needed?” said CEO Alexandra Knauer, who was enthusiastic about the diligence and impressive commitment of the company’s employees.

At the request of the boss, each and every member of the KNAUER team will receive a share of the 10,000 EUR prize money. 3,000 EUR will also go to the “Menschen helfen” campaign, which finances projects for people in need in Berlin.

“I am pleased that our innovation is helping to combat the pandemic. With the support of our facilities, future nucleotide-based vaccines can certainly be produced as nanoparticles, so that there is the possibility to stand up to new virus variants as well,” said Lilit Avagyan after receiving the award.

The decisive factor for the jury’s decision was not only that KNAUER’s innovation has unequivocally advanced the large-scale production of mRNA-based corona vaccine. The potential of mRNA encapsulation in lipid nanoparticles was also highlighted. mRNA-based therapeutics are predicted to have many future applications, possibly in the fight against cancer.

In addition to KNAUER, other decidedly high-caliber applicants were finalists. The innovations ranged, for example, from systems for the early detection of forest fires, to energy storage systems for renewable energies, devices for laser-based particle measurement, and a new MRI technology designed to make diagnostics more agile and cost-effective. Several IT projects were also in the running.

About the Innovation Award:
With the Innovation Award, the economic administrations of the two states of Berlin and Brandenburg annually honor innovative and outstanding entrepreneurial work. With the involvement of business enterprises and other institutions as private partners, the prize was and is a prize of the economy for the economy. Since it was first awarded in 1984 (since 1992 jointly with Brandenburg), there have been more than 165 prize winners and over 4,300 applications.
More at www.innovationspreis.de

About KNAUER:
KNAUER has been developing and manufacturing laboratory instruments for almost 60 years and today focuses on systems and components for liquid chromatography and high pressure dosing applications. Engineering services according to customer requirements are an important cornerstone. Owner Alexandra Knauer, who manages the Berlin-based company together with Carsten Losch, is committed to sustainable corporate development, both in terms of user orientation and responsibility for employees and society. Learn more about KNAUER at www.knauer.net