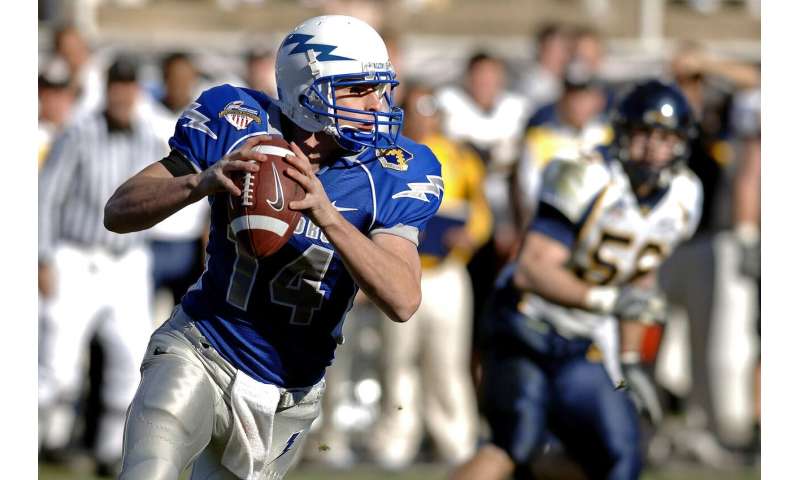 A new study of NCAA football players has found that the age they first started playing tackle football may not affect their recovery after a concussion. The study is published in the September 9, 2020, online issue of Neurology.

Evidence from previous research on the effect of early exposure to tackle football and long-term brain health has been mixed, with some studies showing worse performance on neuropsychological tests or changes in the brain, while other studies show no effect of playing football at a younger age.

“Because football is a very physical game, and concussions can occur, it has been hypothesized that playing at an early age may interfere with neurodevelopmental growth and increase a person’s vulnerability to neurological problems later in life,” said study author Thomas A. Buckley, Ed.D. A.T.C., of the University of Delaware in Newark, Del., and a member of the American Academy of Neurology. “Our study in NCAA football players, some who started playing tackle football as early as age 5, found no link between playing football earlier in life and worse recovery from concussion.”

The study involved 621 NCAA football players from 30 schools as part of the NCAA-Department of Defense Concussion Assessment, Research and Education (CARE) Consortium. Athletes reported that they started playing tackle football at an average age of 10.

Approximately 46% of the athletes had experienced prior concussions.

Testing included common assessments for concussion severity and recovery including measures of memory, reaction time and speed of eye movements, a balance test, and a survey where athletes rank the severity of their symptoms.

“It’s encouraging that our study found no link between earlier exposure to playing tackle football in childhood and adolescence and worse outcomes after concussion while still in college,” said Buckley. “Our results may be reassuring for players and parents, but it is important to note that we were looking at one concussion at one point in time and current testing may not be sensitive enough to detect subtle changes. Larger studies are needed to evaluate recovery from multiple concussions when people get older.”