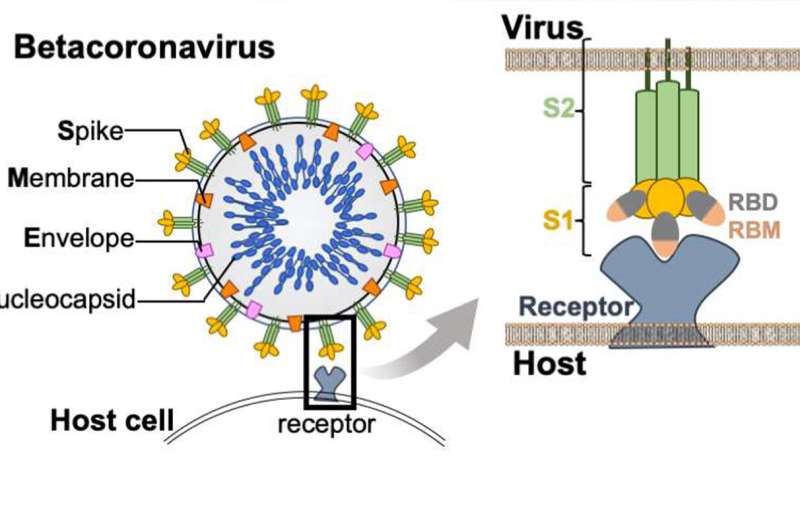 A group of bat viruses related to SARS-CoV-2 can also infect human cells but uses a different and unknown entryway.

While researchers are still honing in on how these viruses infect cells, the findings could help in the development of new vaccines that prevent coronaviruses from causing another pandemic.

Publishing in the journal, eBioMedicine, a team of Washington State University researchers used a computational approach based on network science to distinguish between a group of coronaviruses that can infect human cells from those that can’t. The researchers then confirmed their computational results in the laboratory, showing that a specific cluster of viruses can infect both human and bat cells.

“What we find with these viruses is that they’re able to get into the cells through another mechanism or receptor, and that has a lot of implications for how, and if, they would be able to infect us,” said Michael Letko, co-senior author and assistant professor in the Paul Allen School of Global Health.

Cross-species transmission of coronaviruses poses a serious threat to global health. While numerous coronaviruses have been discovered in wildlife, researchers haven’t been able to predict which pose the greatest threat to humans and are left scrambling to develop vaccines after viruses spill over.

“As we encroach more and more on places where there are human and animal interactions, it’s quite likely that there will be many viruses that will need to be examined,” said Shira Broschat, professor in the School of Electrical Engineering and Computer Science, also co-senior author on the paper.

SARS-CoV-2, the virus behind the ongoing pandemic, is one of several related viruses that uses its spike protein to infect cells by attaching to a receptor protein called angiotensin converting enzyme 2 (ACE2). ACE2 receptors are located in many types of human tissues and cells, including in lungs, the heart, blood vessels, kidneys, the liver and the gastrointestinal tract. In earlier studies, Letko showed that another group of sarbecoviruses, the family to which SARS CoV-2 belongs, can also infect human cells. How they do it is still a mystery. Sarbecoviruses occur in bats and other mammals worldwide.

The researchers started with a database that had more than 1.6 million sarbecovirus entries. To better understand what distinguishes the animal viruses that can infect human cells from those that cannot, the researchers constructed network maps showing the relatedness of viral spike sequences. When the team focused their attention on a small part of the spike protein used by some coronaviruses to bind to receptors, they discovered that their network map had arranged the viruses into clusters that separated those that can infect human cells and those that can’t.

“So many people are sequencing genomes because it’s quite inexpensive and easy to do, but you have to make sense of all these sequences,” said Broschat. “We need to figure out the relationships among the sequences.”

With this very small region of the spike protein in their sights, the researchers then turned to the laboratory. Letko’s team specializes in the study of how viruses infect cells and was able to demonstrate that this region of the spike protein can actually allow non-infectious, virus-like particles to invade human cell cultures. The team’s extensive laboratory results confirmed the accuracy of the network map.

The researchers are still unsure which receptors are involved and if this infection route is actually efficient enough for cross-species spillover to occur, but they have identified a region on the virus spikes that seems to be critical for how the virus group can infect several different types of cells in several different species—information that will be critical for vaccine development.

The researchers hope that as new viruses are discovered in this virus family, scientists will be able to look at them at the computational level and make a prediction of what they will do in the laboratory.