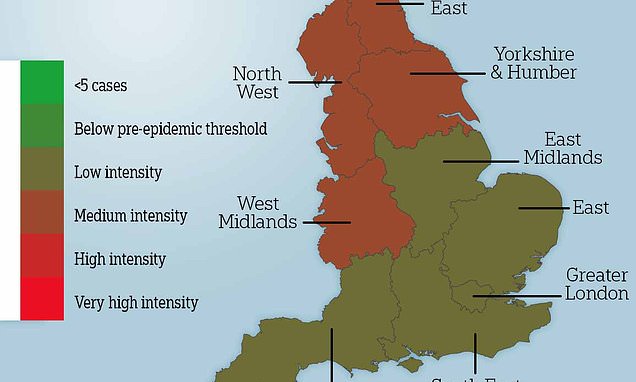 Cases of flu in Britain have doubled in the space of a week, official figures released today have shown.

Cases have increased by 85 per cent within the space of a week in England, while there has been a 55 per cent in Wales.

While flu has risen by 139 per cent in Scotland and 50 per cent in Northern Ireland over the same time frame, data has revealed.

Nearly two million people are now showing signs of the flu, according to estimates as experts warn it could pile more pressure on a stretched NHS. 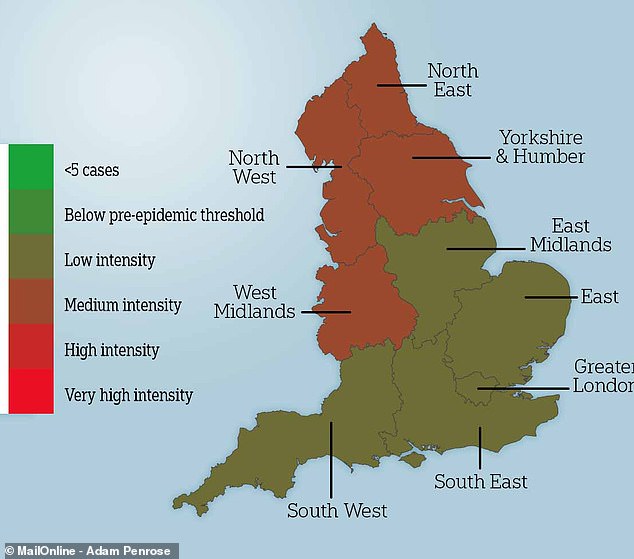 The highest levels of flu are currently in the West Midlands, North West and North East England, and Yorkshire and the Humber – GPs are reporting fewer cases in the east and south of England and London

Health authorities across England, Scotland, Northern Ireland and Wales monitor rates of flu in their own country.

They track the number of flu symptoms reported in GP consultations in a weekly report, published by Public Health England.

Each country sets its own criteria on what is an epidemic, based on how often flu symptoms are reported per 100,000 patients.

None of the home nations have yet to reach epidemic levels, however England and Wales have just crossed into the ‘low’ threshold.

‘Low’ is the second step on a five-point scale towards ‘very high’ – which is what officials consider epidemic levels.

Levels of influenza in Scotland and Northern Ireland remain at the first threshold of an epidemic – branded baseline.

Rates are at their worst since this year’s monitoring began in September and 41 people have died of the illness in the past three months.

PHE figures today showed the UK had, on average, 60 flu diagnoses per 100,000 people last week, with the H1N1 strain (swine flu) being most prevalent.

HOW BAD IS THE UK BEING HIT BY FLU THIS WINTER AND HOW CLOSE ARE WE TO AN EPIDEMIC?

Health authorities across England, Scotland, Northern Ireland and Wales monitor rates of flu in their own country.

They track the number of flu symptoms reported in GP consultations in a weekly report, published by PHE.

Each country sets its own criteria on what is an epidemic, based on how often flu symptoms are reported per 100,000 patients.

None of the home nations have yet to reach epidemic levels, however England and Wales have just crossed into the ‘low’ threshold.

The PHE report also delves into excess deaths – how many more people die than expected – to give a rough estimate of flu deaths.

None of the countries have crossed this mark yet. The data shows 41 people have died from flu in intensive care units across the UK so far this year.

PHE said the rising cases means flu is having a ‘moderate impact’ on hospitals and their intensive care units.

A third of this season’s flu cases that required treatment in intensive care occurred last week – 205 of a total 666.

PHE is now urging eligible people to get vaccinated as figures show more than half of pregnant women and three in 10 over-65s have not had the jab.

Flu, although an inconvenience to fit and healthy people, can be serious and even deadly for the elderly, young children, and people with long-term illnesses.

‘The best form of protection against flu is to get the vaccine if you are eligible and to practice good respiratory and hand hygiene,’ said PHE’s Richard Pebody.

‘It isn’t too late to get the flu vaccine so make sure you take up the offer if you’re eligible, to protect yourself and vulnerable people around you.’

The latest PHE report estimates nearly three per cent of the population said they were suffering from flu-like illnesses last week.

Around 30.6 people per 1,000 reported suffering flu-like symptoms last week – the equivalent of 1.9million people across the UK.

The West Midlands, North East and North West England, and Yorkshire and the Humber are the worst affected, with a ‘medium intensity’ of cases.

The East Midlands, East of England, South West, South East and London are all less affected, with levels only at ‘low intensity’.

Individual regional figures are not available for Scotland, Wales and Northern Ireland.

Epidemic levels, which vary from country to country, are based on the number of GP-consultations resulting in a flu diagnosis.

The rocketing number of flu cases in the UK and across the world was put down to a surge in four aggressive subtypes that attacked the population simultaneously.

One included the so-called ‘Aussie flu’, a strain of influenza A which triggered triple the number of expected cases in Australia during the country’s winter.

Experts feared the virulent H3N2 strain, which reached the UK, could prove as deadly to humanity as the Hong Kong flu in 1968, which killed one million people.

Another was a strain of influenza B, called Yamagata and dubbed ‘Japanese flu’, which was blamed for the majority of cases during the UK’s winter.

Its rapid spread raised concerns because it was not covered in a vaccine given to the elderly. However, experts claim it was less severe.

Usually, just one subtype, of either influenza A or B, is responsible for the majority of cases. The bug spreads easily in the cold weather.