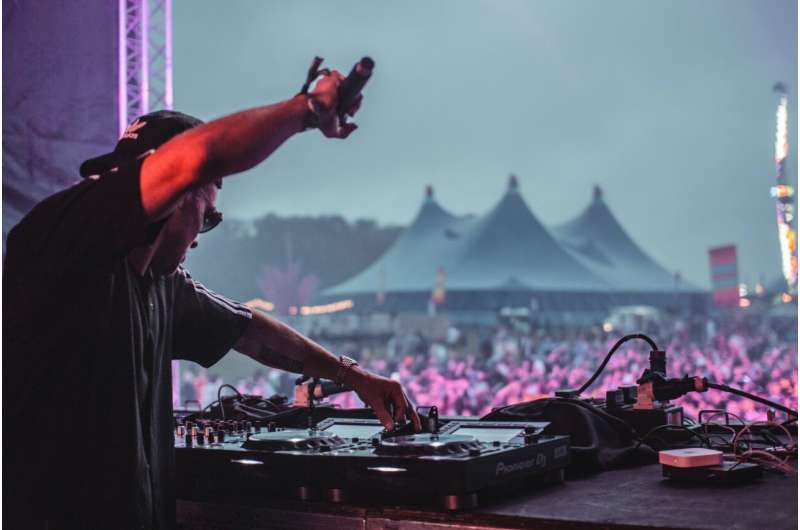 Festival drug-related deaths are a growing public health concern. At present, there is limited evidence highlighting drug trends and harm-reduction practices among Irish festival attendees. One of the main health concerns for this cohort relates to the risks associated with high volumes of drugs being consumed as well as the combinations of substances used together. There are health risks associated with the use of party drugs such as cocaine, MDMA, and ecstasy, particularly for frequent users.

Researchers in the Neurobehavioural Addiction Group, at the School of Medicine, led by Professor Jo-Hanna Ivers, in collaboration with the HSE’s National Clinical Lead of the Addiction Services, Dr. Eamon Keenan examined drug use and related harm-reduction practices and attitudes towards utilization of drug safety testing services.

Their research sought to comprehensively explore the evidence for drug-checking services as a harm reduction intervention. Drug-checking services enable the drug user to have their drugs chemically analyzed, as well as providing information on the content of the samples. Advice, and in some cases, counseling or brief interventions, may also be provided.

The team firstly systematically reviewed the current literature on drug-checking regarding the advantages and disadvantages, how it might work best, as well as the legal framework.

Professor Iver’s team also ran a national anonymous survey examining drug use, harm-reduction practices and attitudes toward the utilization of drug safety testing services in an Irish cohort of festival-goers. A total of 1,193 Irish festival goers were surveyed during the 2019 festival season (June to October). The survey was promoted and targeted through online and social media platforms and outlets.

Ireland’s current Drug Strategy Reducing Harm; Supporting Recovery highlights the need for targeted harm-reduction, education and prevention measures and tailoring initiatives for higher-risk groups, such as people who use drugs in settings where drug-taking is common (e.g., festivals). Harm-reduction initiatives and drug welfare are becoming the mainstream at festivals in many European countries, and there have been similar initiatives in Ireland. However, there is no data on the prevalence of drug use and the harm-reduction practices in Irish festival-goers.

Reducing harm from drug use is a critical public health issue, and the Trinity/HSE research provides valuable insight into the attitudes and behaviors of a high-risk and under-consulted population. These findings should help inform the Public Health response to this important area.

In parallel to this research, a report was prepared for the Minister of State for Public Health, Wellbeing and National Drugs Strategy by the Health Services Executive National Social Inclusion Office, entitled “Report of the Emerging Drug Trends and Drug Checking Working Group 2021.”

This report, published in September 2021, was authored by Dr. Keenan, Nicki Killeen and the Emerging Drugs Trends and Drug Checking Working Group, of which Professor Ivers was a senior member. This comprehensive report identified that there is currently no tailored service for young people who use drugs in nightlife settings as exists in some other countries. Health and social responses in nightlife settings and drug-checking provision provide an opportunity for professionals to engage with populations of young people that do not currently present to traditional service structures, including those who may have never received previous healthcare interventions for their substance use. The report stated that there is an increased demand for drug-checking services within the night-time economy, and especially at festivals, however, there are also barriers to an onsite ‘front of house’ service at present.

The Working Group suggested: “It is possible that a ‘back of house’ approach could be used instead, that is, using an amnesty bin within a drug service that could also inform festival goers of the content of the drugs, via communication structures outside. This might provide valuable insight into drug contents to inform drug alert mechanisms. If this ‘back-of-house’ approached worked, we might then be able to move to a full front-of-house approach at festivals. The overall aim is to protect health and wellbeing, and to minimize the harms caused by the use and misuse of drugs.”

The working group and the research team presented their findings at Ministerial level in the Department of Health, which provided vital evidence to underpin new approaches to harm reduction for a hard-to-reach population. This research is an excellent example of the effective partnership of academics, policymakers and clinicians to produce evidence, affect policy change, and secure necessary resources to implement the evidence into practice in real-time.