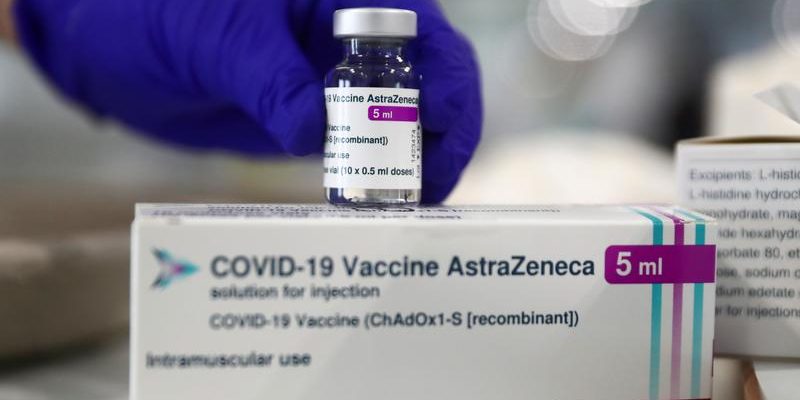 (Reuters) – Many countries are resuming use of the Anglo-Swedish drugmaker’s vaccine after the European Medicines Agency (EMA) and the World Health Organization (WHO) said the benefits outweighed the risks following investigations into reports of blood clots.

Fresh data on Thursday showed the AstraZeneca vaccine was 76% effective in preventing symptomatic coronavirus infections in a new analysis of its U.S. trial.

A Ukrainian servicewoman who died two days after taking the Covishield – the vaccine made by AstraZeneca partner Serum Institute of India – had not complained of any ill effects after taking the shot, the health ministry said on Wednesday. A poll on Sunday showed European trust in the vaccine had plunged.

At least 17 countries had suspended or delayed use after reports of hospitalisations with clotting issues and bleeding, while Asia is accelerating inoculations.

U.N. agency WHO, which has urged inoculations continue, said on Friday that more than 20 million doses of the vaccine had been given to Europeans, with over 27 million doses of Covishield administered in India.

** Below is a list of countries and regions to resume or start using the vaccine after the investigations, in alphabetical order:

The pharmaceutical regulator approved on Sunday the local manufacturing of the vaccine by CSL.

Cyprus, which suspended the vaccine on March 15, restarted administering it on March 19.

Said the vaccine was safe but added a warning to the vaccine’s label about rare blood clots.

Medical regulator approved the resumed use of AstraZeneca’s vaccine on March 19, but said it should only be given to people aged 55 and older.

To resume using the AstraZeneca vaccine from Monday, but will only give it to people aged 65 and over.

Began using the vaccine on Monday after suspending it last week. But the Food and Drug agency has warned against its use on people with blood clotting disorders.

Plans to resume rollout of the vaccine in the coming days for all those aged 18 and over, a committee said on March 19, after suspending it on March 14.

Resumed using the vaccine on March 19, and Italians who decline to be inoculated with it will be given an alternative later on.

Also said it would restart administering the shots.

Restarted administering the vaccine on March 19.

The health minister said on March 18 that the country would resume using the vaccine this week.

President Moon Jae-in, 68, plans to get the shot on Tuesday after the government said it could be used on older people.

Premier Su Tseng-chang got the vaccine on Monday as the island began its immunisation campaign.

Began use on March 15, with Prime Minister Prayuth Chan-ocha becoming the first to be inoculated, after Thailand delayed rollout the week before.

Will launch its vaccination campaign with the AstraZeneca vaccine from April 1.

** Below is a list of countries and regions where suspensions continue for now, in alphabetical order:

Suspended use of one batch of the vaccine on March 7 after the death of one person and the illness of another.

Suspended administration of the vaccine it was scheduled to receive on March 20 as part of the global vaccines sharing scheme COVAX, the health ministry said.

Two-week suspension of the COVID-19 vaccine ends on March 25. A local survey indicated that one in three Danes would decline to get the shot.

Suspended use of the vaccine while it investigates two possible cases of blood clots, the Finnish Institute for Health and Welfare said on March 19.

Has limited the use of the vaccine after a nurse died of anaphylactic shock, news agency TASS reported on March 19.

Suspended vaccine use on March 11.

Health authorities said on March 17 it was too soon to say if the vaccine causes blood clots after halting rollout on March 11.

Temporarily stopped vaccinating people with one batch of vaccine on March 11.

Needs “a few days” to decide whether to restart using the vaccine, it said on March 19 and will likely make a decision this week.