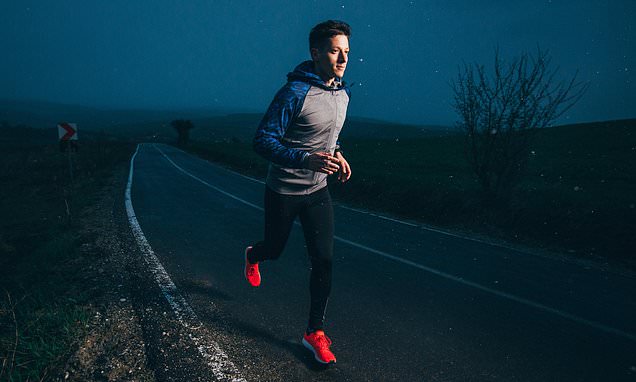 Scrap that early morning jog! Evening exercise appears to be better for you because your body uses up less oxygen, two studies find

Taking an evening jog may be better for you than going on a morning run, two new studies find.

In research conducted on mice, scientists said that exercise performance was about 50 percent better during the evening hours.

Rodents who exercised at night needed less oxygen, making them more efficient, and had higher levels of a substance in the body that increases the metabolic activity of tissues.

The teams – from the Weizmann Institute of Science in Rehovot, Israel, and the University of California, Irvine – say their studies are among the first to prove the long-held theory that time of a day has an impact on exercise productivity. 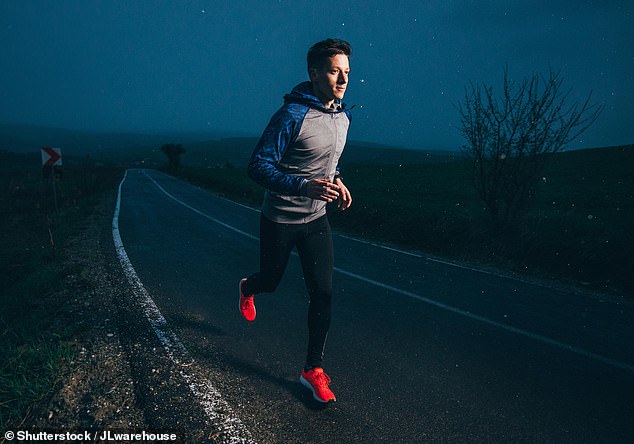 New studies, from the Weizmann Institute of Science and the University of California, Irvine, found mice that exercised in the evening were 50% more efficient than in the morning (file image)

Both teams say that exercise is impacted by our daily (circadian) rhythms.

Our circadian clocks are linked to the light–dark cycle, or how many hours of day and night there are.

They allow us to anticipate and prepare for precise and regular environmental changes such as when to eat and sleep.

Found throughout the nervous system and peripheral organs, these ‘clock genes’ even play a role in DNA repair, fertility and the effectiveness of medications.

If your body doesn’t receive these signals, however, your circadian rhythm can be completely thrown off.

People with routine disruptions of their circadian rhythms have been shown to have a shorter lifespan and be more prone to cancer, as well as suffer from various sleep disorders such as insomnia.

Circadian rhythms are physical, mental and behavioral changes that follow a 24-hour cycle.

They respond primarily to light and darkness in an organism’s environment.

They are found in most living things, including animals, plants and many tiny microbes.

Circadian rhythms are driven by our biological clocks.

They are produced by natural factors within the body, but are also affected by signals from the environment.

Light is the main cue influencing circadian rhythms, turning genes on or off that control an organism’s internal clocks.

When there is less light, the brain makes more melatonin to make you drowsy but more light means you are more awake.

They have been linked to various sleep disorders, such as insomnia.

‘It’s quite well known that almost every aspect of our physiology and metabolism is dictated by the circadian clock,’ said senior author of the first study Dr Gad Asher, a principal investigator at the Weizmann Institute of Science.

‘This is true not only in humans but in every organism that is sensitive to light. We decided to ask whether there is a connection between the time of day and exercise performance.’

Because mice are nocturnal, the teams translated mouse time to human time as the active phase (morning) and the resting phase (evening).

For the first study, published in the journal Cell Metabolism, the team put mice on treadmills at different times of day.

Researchers looked at how much the mice physically exerted with varying intensities and regimens.

They found that exercise performance for the mice was about 50 percent better in the evening hours compared to the morning hours.

Additionally, during the ‘mouse evening’, researchers saw higher levels of a metabolite called ZMP, known to increase the metabolic activity of tissues.

In fact, it was implicated in the 2009 Tour de France, and was believed to be used by cyclists as a performance enhancer.

The team also compared their results in mice with 12 humans, and found they consumed less energy in the evening, which made them more efficient, compared to the morning.

For the second study, also published in Cell Metabolism, the team put the mice on treadmills, but looked at how the rodents’ tissue change during exercise.

They specifically wanted to analyze the way that sugar metabolizes and how fat is burned.

Researchers found a protein known as hypoxia-inducible factor 1-alpha (HIF-1α), which plays a role in how cells respond to oxygen levels in mammals.

The team saw that it was activated by the body during exercise in different ways at different times of day.

‘This is a new finding,’ said senior author of the second study Dr Paolo Sassone-Corsi, director of the Center for Epigenetics and Metabolism at UC Irvine.

‘It makes sense that HIF-1α would be important here, but until now we didn’t know that its levels fluctuate based on the time of day.’

Researchers say that mice who exercised in the active phase had their HIF1a pathway activated, which helped them exercise better, compared to the resting phase.

However, both teams say that the findings may not be easily translatable to humans because some people are night owls and some are early birds.

‘You may be a morning person, or you may be a night person, and those things have to be taken into account,’ Dr Sassone-Corsi said.