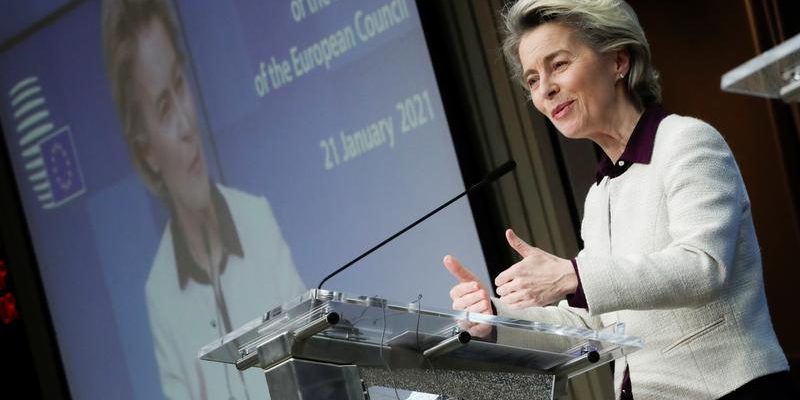 BERLIN/BRUSSELS (Reuters) – The European Union stood its ground in a row with AstraZeneca over COVID-19 vaccine supplies on Friday, pressing the Anglo-Swedish drugmaker to deliver the doses as promised in its contract.

The EU, whose member states are far behind Israel, Britain and the United States in rolling out vaccines, is scrambling to get supplies just as the West’s biggest drugmakers slow deliveries to the bloc due to production problems.

AstraZeneca said last week it would cut deliveries in the first quarter due to production issues at a Belgian factory. An EU official said that meant the EU would receive 31 million doses in the period, or 60% less than initially agreed.

In a bid to break the deadlock, AstraZeneca offered 8 million more doses of its shot to the EU, but the bloc said that was too far short of what was originally promised, an EU official told Reuters.

Under a contract agreed in August, the company should have supplied at least 80 million doses to the EU in that period, the official said, and possibly even 120 million “depending on how you read the contract”.

EU Commission head Ursula von der Leyen urged AstraZeneca to fulfil its obligations and said it had paid the company in advance.

“There are binding orders and the contract is crystal clear,” she told Deutschlandfunk radio, adding it contained the amount of doses for December and the first three quarters of 2021.

AstraZeneca has published its contract with the European Commission, the executive body said on Friday. It was signed on Aug. 27 last year and largely redacted, but von der Leyen said it mentioned four delivery sites, two of which were in Britain. (bit.ly/2MBIaoU)

AstraZeneca Chief Executive Pascal Soriot told newspapers on Tuesday the EU contract was based on a “best-effort” clause and did not commit the company to a specific timetable.

Soriot has also said the EU was late to strike a supply contract so the company did not have enough time to iron out production problems at a vaccine factory run by a partner in Belgium.

Von der Leyen said the “best-effort” clause was only valid as long as it was not clear whether AstraZeneca could develop a vaccine. She also said commitments with other buyers should not affect the order in which supplies are delivered.

Britain, in turn, said it could not publish details of its AstraZeneca COVID-19 supply contract because it would jeopardize national security, a junior minister said on Friday.

Drug makers across the world have developed vaccines in less than a year, with many already approved by regulators, super-fast progress by comparison with previous viruses, and glitches in production and delivery had always been expected.

The European Medicines Agency is expected to approve the AstraZeneca vaccine later on Friday, making it the third shot available in the bloc.

The head of Germany’s vaccine regulator, Paul Cichutek, told a news conference he expected the vaccine to be approved without age restrictions with the warning that the amount of available data for older age groups was limited.

Germany’s vaccine committee said on Wednesday it could only recommend the shot for those aged under 65, although Health Minister Jens Spahn said the final recommendation would only come once the shot was approved.

The EU contract with AstraZeneca is an advance purchase agreement for the supply of at least 300 million doses provided the vaccine is approved as safe and effective, with doses delivered in stages.

The EU has also faced cuts to vaccine deliveries from Pfizer and German partner BioNTech, pilling pressure on policymakers who are facing criticism from voters over the sluggish pace of the rollout.

In a further headache for the bloc, France and Italy said they were getting fewer COVID-19 vaccine doses produced by Moderna than promised.

France expects 25% fewer doses than previously anticipated, the health ministry said on Thursday, while Italy’s COVID-19 special commissioner said on Friday that Moderna would deliver 20% fewer vaccines to Italy in the week starting on Feb. 7.