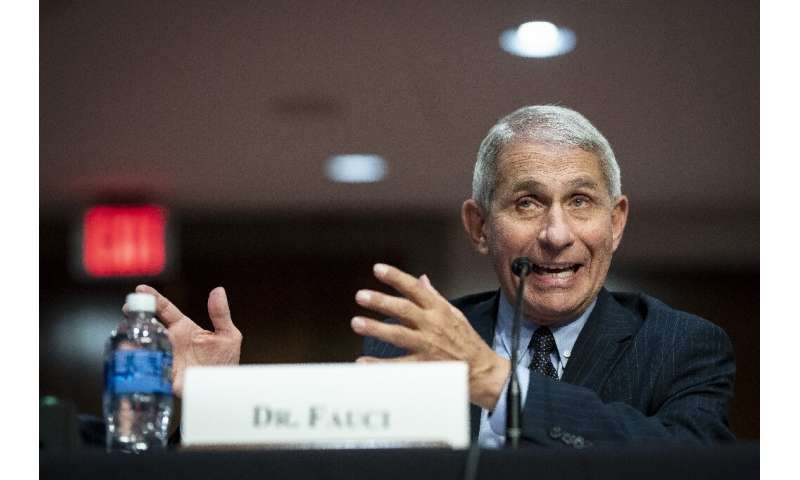 The European Union reopened its borders Wednesday to visitors from 15 countries—but not the virus-stricken United States, where a top health official warned the country is headed in the “wrong direction” as cases spike in multiple states.

US infectious diseases expert Anthony Fauci said that the United States could see 100,000 new COVID-19 cases a day, and several US states imposed 14-day quarantines on travelers from other states.

Also in the US, Democratic presidential candidate Joe Biden announced he will not hold rallies during the outbreak, a move that is in stark contrast with President Donald Trump, who has already held large campaign gatherings.

The 77-year-old former vice president delivered a blistering critique of his November opponent’s handling of the virus, saying the Republican president had “failed” the country.

“This is the most unusual campaign I think in modern history,” Biden said. “I’m going to follow the doc’s orders—not just for me but for the country—and that means that I am not going to be holding rallies.”

In Brussels, the EU finalized the list of countries whose health situation was deemed safe enough to allow residents to enter the bloc starting on Wednesday.

Notably excluded were Russia and Brazil, as well as the United States, whose daily death toll passed 1,000 Tuesday for the first time since June 10. 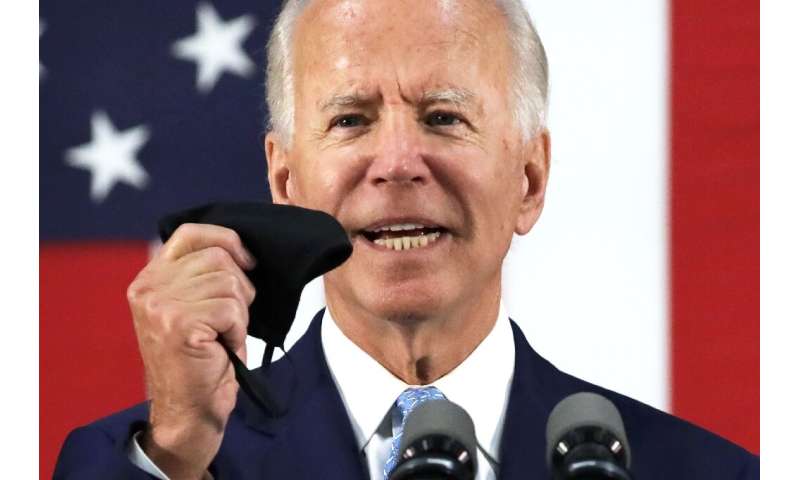 Travelers from China, where the virus first emerged late last year, will be allowed on the condition that Beijing reciprocates and opens the door to EU residents.

The border relaxation, to be reviewed in two weeks and left to member states to implement, is a bid to help rescue the continent’s battered tourism sector, which has been choked by a ban on non-essential travel in place since mid-March.

But with some 10.4 million known infections worldwide, the pandemic is “not even close to being over,” the World Health Organization has warned.

In Washington, Fauci, a member of Trump’s coronavirus task force, warned Congress that “clearly we are not in total control right now.” 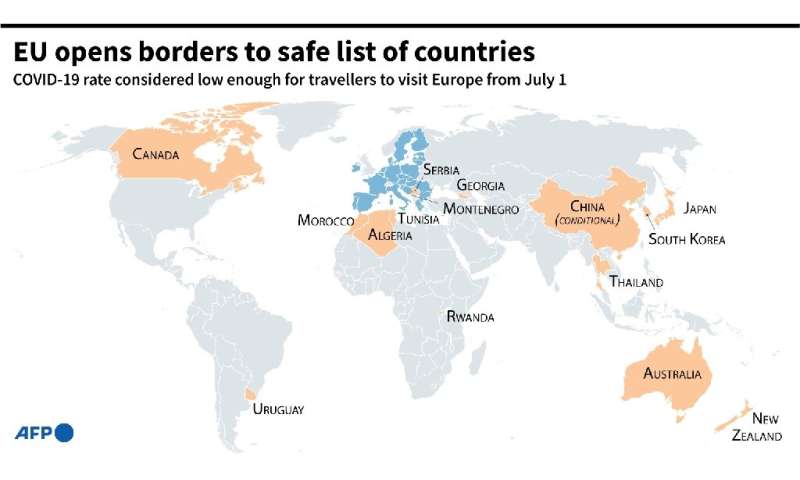 Alarming spikes in Texas and Florida are driving the national total of new cases to over 40,000 per day, and they need to be tamped down quickly to avoid dangerous surges elsewhere in the country, Fauci stressed.

Texas alone reported 6,975 new cases of COVID-19 on Tuesday, its highest tally yet.

“I’m very concerned and I’m not satisfied with what’s going on, because we’re going in the wrong direction,” Fauci said.

Senator Lamar Alexander, a Republican who chairs the Senate panel, urged Trump to end the politicization of mask-wearing by putting on one himself.

“The president has plenty of admirers, they would follow his lead,” Alexander said. “It would help end this political debate.” 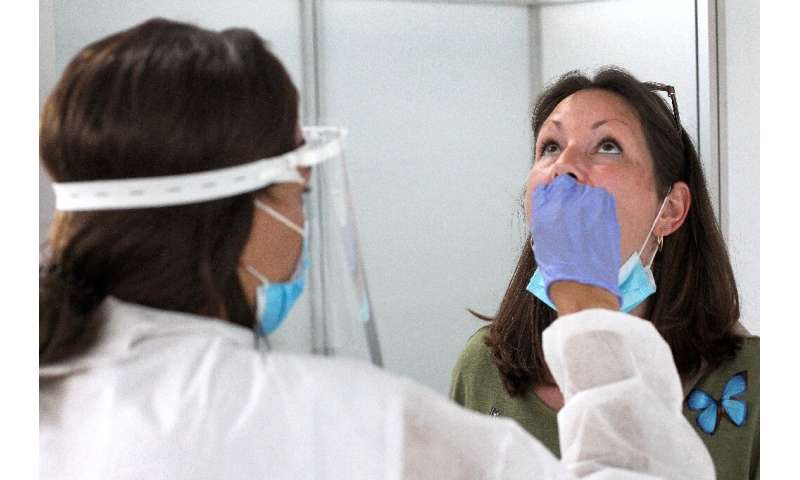 New York, New Jersey and Connecticut on Tuesday doubled to 16 the number of US states whose residents must go into quarantine for 14 days if they visit any of the northeastern states.

The Pan American Health Organization warned, meanwhile, that the coronavirus death toll in Latin America and the Caribbean could top 400,000 by October without stricter public health measures.

That would represent a quadrupling of the fatal cases of COVID-19 in the region.

Brazilian President Jair Bolsonaro, meanwhile, scored a victory Tuesday when a judge overturned a ruling that had forced him to wear a mask in public. The judge deemed the rule redundant since face masks are already mandatory in Brasilia.

European aircraft maker Airbus said it is planning to cut around 15,000 jobs worldwide, 11 percent of its total workforce. 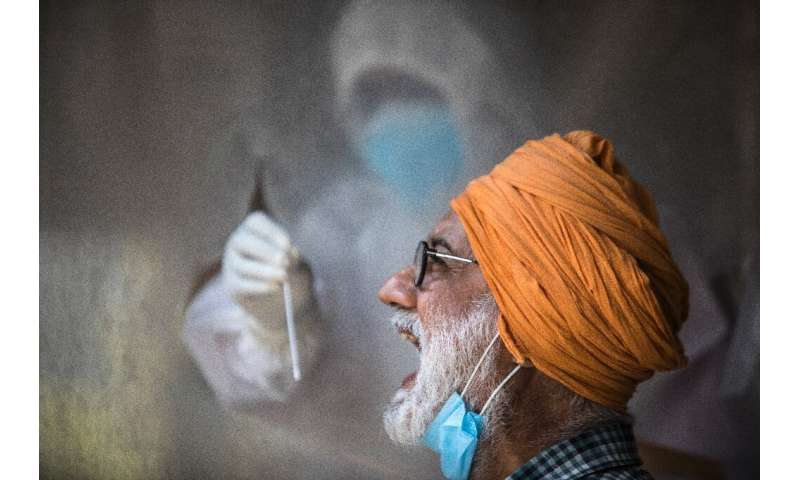 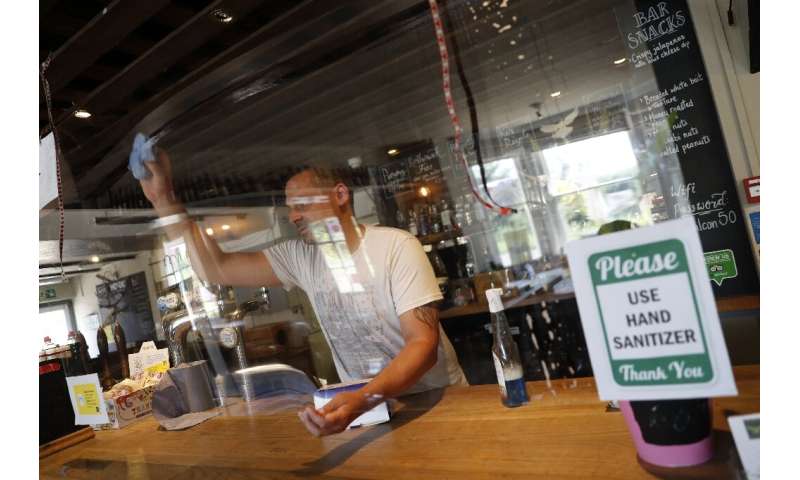 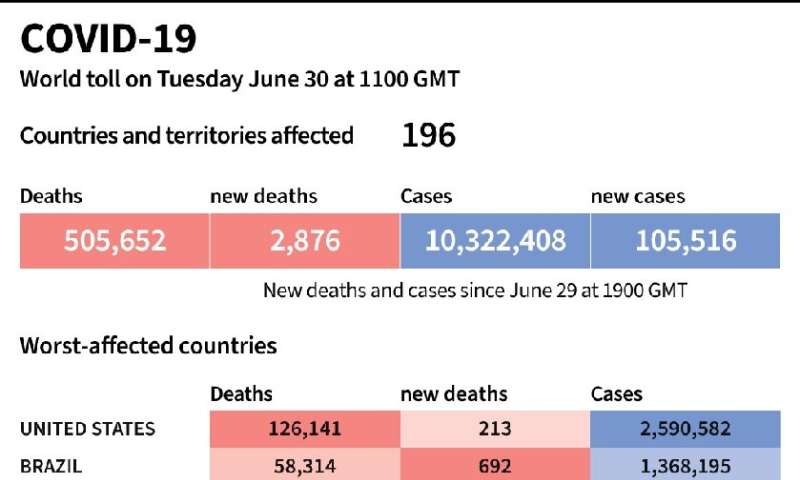 The worst is yet to come, with economists predicting a double-digit slump in output during the second quarter, tipping Britain into a technical recession.

Prime Minister Boris Johnson vowed Tuesday to deliver an “infrastructure revolution” to help the country out of the economic downturn.

Germany, which has been praised for its handling of COVID-19, saw its North Rhine-Westphalia state extend a lockdown on a district hit hard by a slaughterhouse outbreak.

And in Australia, a spike in cases in parts of Melbourne spurred new stay-at-home measures affecting some 300,000 people.