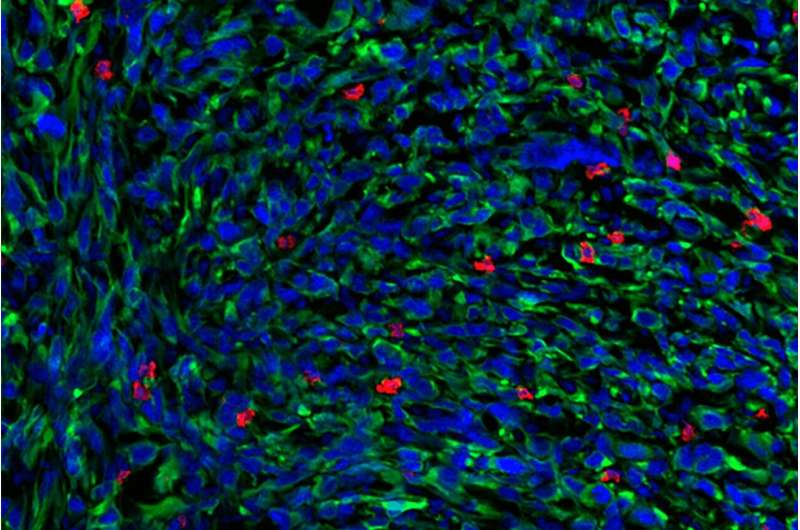 Non-small cell lung cancer (NSCLC) is the most common type of lung cancer in humans. Some patients with NSCLC receive a therapy called immune checkpoint blockade (ICB) that helps kill cancer cells by reinvigorating a subset of immune cells called T cells, which are “exhausted” and have stopped working. However, only about 35% of NSCLC patients respond to ICB therapy. Stefani Spranger’s lab at the MIT Department of Biology explores the mechanisms behind this resistance, with the goal of inspiring new therapies to better treat NSCLC patients. In a new study published on Oct. 29 in Science Immunology, a team led by Spranger lab postdoc Brendan Horton revealed what causes T cells to be non-responsive to ICB—and suggests a possible solution.

Scientists have long thought that the conditions within a tumor were responsible for determining when T cells stop working and become exhausted after being overstimulated or working for too long to fight a tumor. That’s why physicians prescribe ICB to treat cancer—ICB can invigorate the exhausted T cells within a tumor. However, Horton’s new experiments show that some ICB-resistant T cells stop working before they even enter the tumor. These T cells are not actually exhausted, but rather they become dysfunctional due to changes in gene expression that arise early during the activation of a T cell, which occurs in lymph nodes. Once activated, T cells differentiate into certain functional states, which are distinguishable by their unique gene expression patterns.

The notion that the dysfunctional state that leads to ICB resistance arises before T cells enter the tumor is quite novel, says Spranger, the Howard S. and Linda B. Stern Career Development Professor, a member of the Koch Institute for Integrative Cancer Research, and the study’s senior author.

“We show that this state is actually a preset condition, and that the T cells are already non-responsive to therapy before they enter the tumor,” she says. As a result, she explains, ICB therapies that work by reinvigorating exhausted T cells within the tumor are less likely to be effective. This suggests that combining ICB with other forms of immunotherapy that target T cells differently might be a more effective approach to help the immune system combat this subset of lung cancer.

In order to determine why some tumors are resistant to ICB, Horton and the research team studied T cells in murine models of NSCLC. The researchers sequenced messenger RNA from the responsive and non-responsive T cells in order to identify any differences between the T cells. Supported in part by the Koch Institute Frontier Research Program, they used a technique called Seq-Well, developed in the lab of fellow Koch Institute member J. Christopher Love, the Raymond A. (1921) and Helen E. St. Laurent Professor of Chemical Engineering and a co-author of the study. The technique allows for the rapid gene expression profiling of single cells, which permitted Spranger and Horton to get a very granular look at the gene expression patterns of the T cells they were studying.

Seq-Well revealed distinct patterns of gene expression between the responsive and non-responsive T cells. These differences, which are determined when the T cells assume their specialized functional states, may be the underlying cause of ICB resistance.

Now that Horton and his colleagues had a possible explanation for why some T cells did not respond to ICB, they decided to see if they could help the ICB-resistant T cells kill the tumor cells. When analyzing the gene expression patterns of the non-responsive T cells, the researchers had noticed that these T cells had a lower expression of receptors for certain cytokines, small proteins that control immune system activity. To counteract this, the researchers treated lung tumors in murine models with extra cytokines. As a result, the previously non-responsive T cells were then able to fight the tumors—meaning that the cytokine therapy prevented, and potentially even reversed, the dysfunctionality.

Administering cytokine therapy to human patients is not currently safe, because cytokines can cause serious side effects as well as a reaction called a “cytokine storm,” which can produce severe fevers, inflammation, fatigue, and nausea. However, there are ongoing efforts to figure out how to safely administer cytokines to specific tumors. In the future, Spranger and Horton suspect that cytokine therapy could be used in combination with ICB.

“This is potentially something that could be translated into a therapeutic that could increase the therapy response rate in non-small cell lung cancer,” Horton says.

Spranger agrees that this work will help researchers develop more innovative cancer therapies, especially because researchers have historically focused on T cell exhaustion rather than the earlier role that T cell functional states might play in cancer.

“If T cells are rendered dysfunctional early on, ICB is not going to be effective, and we need to think outside the box,” she says. “There’s more evidence, and other labs are now showing this as well, that the functional state of the T cell actually matters quite substantially in cancer therapies.” To Spranger, this means that cytokine therapy “might be a therapeutic avenue” for NSCLC patients beyond ICB.