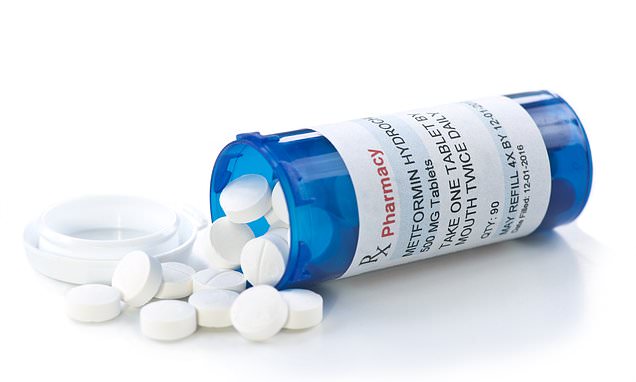 Diabetes drug metformin could help you lose weight, say scientists who found it works better than diet and exercise at keeping the bulge off

A drug used by patients with diabetes holds potential in helping people lose weight and keep it off, a study suggests.

Metformin is dished out to millions across the world to treat type 2 diabetes, as it helps the body respond to insulin.

But a 15-year study of more than 30,000 people found a daily dose can also lead to steady long-term weight loss.

It was a more successful intervention than a strict diet and exercise plan, which researchers warned people quickly get bored of. 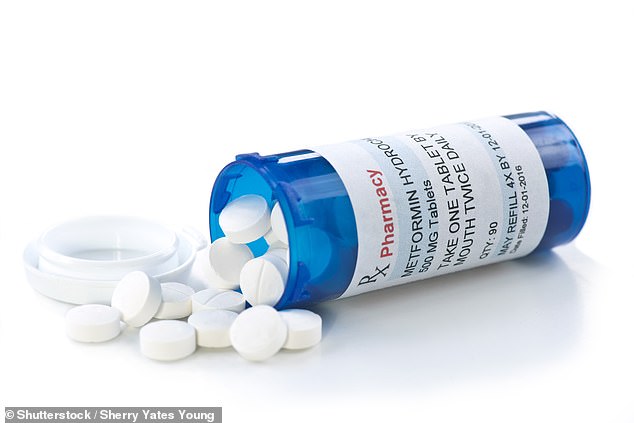 Metformin is used to treat people with type 2 diabetes, but has also shown to have potential to help people lose weight and keep it off in a study by Louisiana State University

In the future, they suggest metformin could be prescribed to people who have worked hard to lose weight for health purposes.

The study authors wrote in the Annals of Internal Medicine: ‘Helping overweight and obese patients lose weight and keep it off is a major public health problem.

‘Although some patients are initially successful in losing weight, many regain some if not most of the weight.

‘Understanding factors that contribute to long-term weight loss (LTWL) may allow for development of interventions that promote LTWL.’

The study, part of the CDC’s Diabetes Prevention Program, compared the effects of metformin to a healthy diet and exercise.

Researchers at Louisiana State University recruited 3,234 participants who were obese, overweight or had elevated glucose levels.

Metformin is an oral antidiabetic drug for the treatment of diabetes.

Created by Bristol-Myers Squibb Company, Metformin is approved in the US and the UK as a treatment for type 2 diabetes.

It helps diabetics to respond normally to insulin. Like most diabetic drugs, the ultimate goals of Metformin are to lower blood sugar to a normal level and maintain this level.

When taken alone, Metformin is unlikely to cause hypoglycemia or weight gain, but when taken in conjunction with insulin or a sulfonylurea both of these side effects are more likely.

It is sold both under brand names, and also as a generic drug. Common brand names include Glucophage, Riomet and Fortamet.

They were randomly given either a placebo, an intensive lifestyle intervention (ILS), which was a diet and exercise plan, or 850mg metformin twice a day.

Although people in the ILS group were more likely to lose weight in the first year, the follow up over 15 years showed that this was difficult to maintain.

During years six to 15, when the study was completed, the average weight loss relative to baseline was 6.2 per cent in the metformin group.

‘Diet and exercise enthusiasm generally doesn’t last long. Taking a pill a day is a lot easier than going to diet and exercise for 15 years. Almost no one can achieve it.’

Professor Gadde thinks more research should be done on metformin’s potential use as a weight loss management tool for people who struggle to keep the bulge away.

The study, led by Professor John Apolza, was funded by National Institutes of Health.

The FDA or NHS has not approved metformin for weight loss purposes alone.

However, some doctors will prescribe it to people who are overweight or obese and have type 2 diabetes or prediabetes.

It is not entirely clear how metformin works and whether it suppresses the appetite or restricts the body from storing fat.

In people with diabetes, metformin reduces the release levels of sugar from the liver, which stops blood glucose levels from rising too high.

The body does not have to produce as much insulin, which makes people overweight by acting on the brain to cause hunger. Therefore, the patient’s hunger is reduced when taking metformin.

Metformin is also used when treating polycystic ovary syndrome (PCOS), although it’s not officially approved for PCOS, according to the NHS.