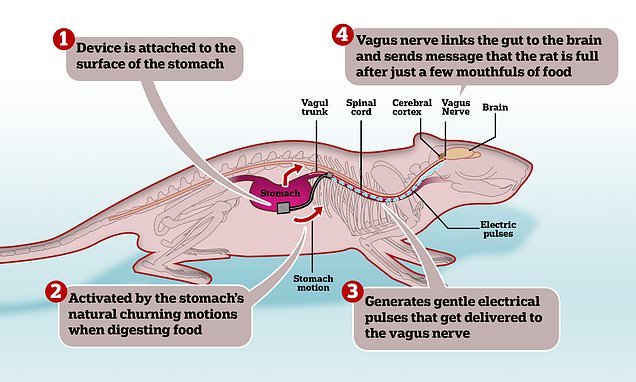 A cure for obesity? Scientists create a 1cm device that attaches to the stomach and tells the brain it is full through gentle zaps of electricity

Scientists have created a 1cm device that attaches to the stomach and tells the brain it is full via gentle zaps of electricity.

The implant, yet to be named, becomes activated when the stomach naturally starts churning food during digestion.

This generates electrical impulses that get delivered to the vagus nerve, which links the gut to the brain. This dupes the brain into thinking the stomach is full after just a few mouthfuls of food.

Tests on rats showed the device reduced their food consumption by a third and caused them to lose 38 per cent of their body weight after just 15 days.

Unlike a gastric band or bypass, the device can be easily removed, with the rat’s eating habits and weight bouncing back almost immediately after it was taken out. 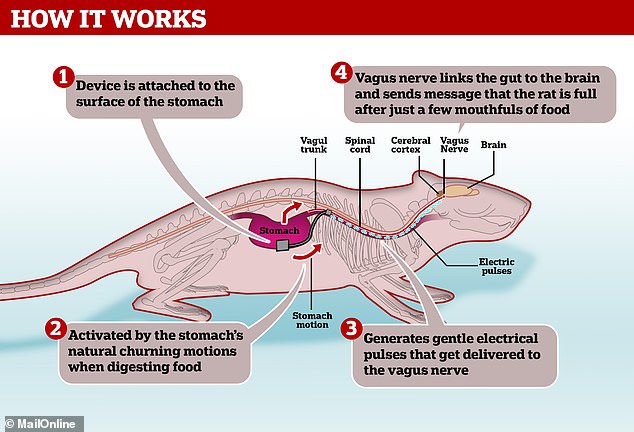 The above demonstrates how the device worked when tested on rats. After being attached to the stomach, it became activated by the organ’s churning motions, which caused the device to send electrical impulses to the brain. This duped the brain it into thinking the rodent was full

Engineers at the University of Wisconsin-Madison, who were led by Dr Xudong Wang, developed the device.

They also carried out the study of the gadget on rats, with their results published in the scientific journal Nature Communications.

Obesity affects around 93.3million adults in the US, according to the Centres for Disease Control and Prevention.

In the UK, around one in four adults, and one in five children aged 10-to-11, are obese, NHS statistics show.

Speaking of how the device works, Dr Wang said: ‘The pulses correlate with the stomach’s motions, enhancing a natural response to help control food intake.’

Half of the rats in the study had the device surgically fitted to the surface of their stomachs.

It was then attached to their vagus nerves via a gold-plated lead. The remaining rodents acted as controls and had surgery to fit a sham device.

Churning motions were induced in the animals by injecting water into their guts. The device picked up on these movements via a electric nanogenerator. Stimulation of the animals’ vagus nerves was measured by electrodes.

HOW DOES THE DEVICE WORK?

The unnamed device is attached to the surface of the stomach.

It then gets activated by the stomach’s natural churning motions when it digests food.

This generates gentle electrical pulses that get delivered to the vagus nerve.

The vagus nerve links the gut to the brain and sends message that the rat is full after just a few mouthfuls of food.

This reduces food intake, which leads to weight loss.

The animals started at an average weight of 250g. Their weight and food intake was then measured every other day for all 93 days of the experiment.

Fifteen days after the device was fitted, those with the implant ate around two-thirds of what the sham rats did.

This caused them to lose 35 per cent of their body weight within 18 days, which then rose to, and stayed at, 38 per cent for the remaining 75 days of the study.

Unlike an existing implant called Maestro, which was approved by the Food and Drug Administration in the US in 2015, the new device does not require bulky batteries that have to be frequently changed.

Dr Luke Funk, a surgery professor in UW-Madison’s division of minimally invasive, foregut and bariatric surgery, called this a ‘significant advantage when you consider the inconvenience that patients experience when having to charge a battery multiple times a week for an hour or so’.

The newly-created device also has no electronics or complicated wiring and relies just on the movement of the stomach wall to power internal generators.

This means the vagus nerve is only stimulated when the stomach moves. 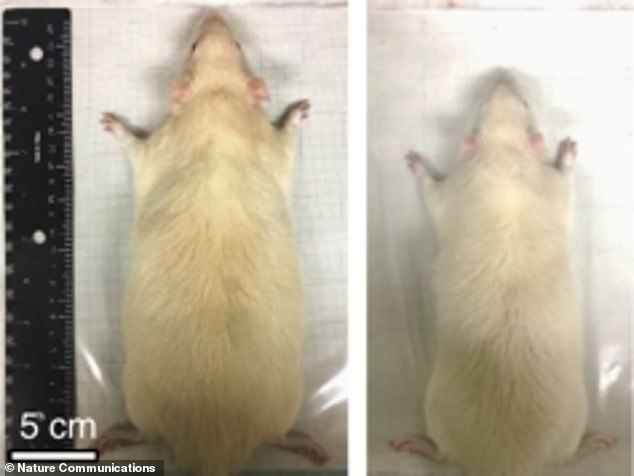 The rat on the left was part of the control group that had surgery to fit a sham. The right rodent had the newly-created device attached to its stomach. Picture shows the difference in weight

Maestro administers high-frequency zaps to the vagus nerve, which shuts down all communication between the stomach and brain, and has been linked to surrounding tissue damage.

The new device showed no safety concerns in the rats and remained in a fixed position throughout the duration of the study.

It has been patented via the Wisconsin Alumni Research Foundation and the researchers hope to test it in larger animal models before moving on to humans.

But they first need to create a ‘shutter switch’ that allows the device to be turned on and off while it is inside the body.

It would otherwise send ‘full’ messages to the brain every time food is digested.

Once this is sorted, the engineers believe the device could revolutionise weight management.

‘Our expectation is the device will be more effective and convenient to use than other technologies,’ Dr Wang said.

He has previously created implantable nanogenerators that harvest energy from people’s heart beats and breathing, as well as a motion-powered bandage for wound healing.