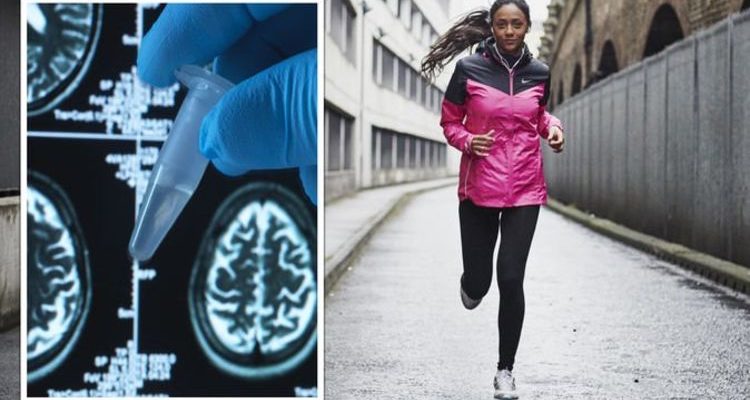 The global burden of dementia is expected to grow exponentially in coming years, but scientists are yet to find a cure. Studies have highlighted the importance of lifestyle in the prevention of the condition, notably exercise, which could be key to protecting the brain from mental decline. New research has determined how much exercise each week could help prevent dementia.

Exercise has been shown to change the brain’s anatomy, physiology and function, which holds great significance for people with dementia.

Now, new research suggests that moderate to high levels of regular physical activity could be key to staving off cognitive decline.

READ MORE: Dementia: The ‘most immediate’ lifestyle habit that could cut your risk of mental decline

“Our findings may support using blood biomarkers to further develop risk profiles and may provide the chance for intervening early.”

Tau is a protein that helps stabilise the internal skeleton of nerve cells in the brain.

Many forms of dementia are characterised by the presence of toxic clumps of tau protein in the brain.

This protein in the brains of people with dementia is usually misfolded and abnormally shaped.

The study included 1,159 participants of median age of 77 years.

As part of the ongoing analysis, data is collected from participants every three years.

Among the participants, 400 reported engaging in medium activity, which was defined as less than 150 minutes of physical activity per week.

A total of 402 participants reported engaging in high level activity, which was defined as 150 or more minutes of physical activity per week.

The study adds to growing research highlighting the promising effects of exercise on the brain.

Exercise targets mainly the prefrontal cortex in the brain, which is critical for decision-making, and personality.

The hippocampus, on the other hand, is the part of the brain associated with verbal memory and learning.

Studies have found that sweat-inducing workouts could produce new cells in the hippocampus, increasing its volume and improving long-term memory.

In fact, scientists have managed to determine when to exercise in the day to protect the brain from cognitive decline.

They’ve suggested that moderate exercise in the morning may improve cognitive performance throughout the day.

Further studies have shown that combining morning exercise with brief walks throughout the workday could also deliver promising results for short term memory.