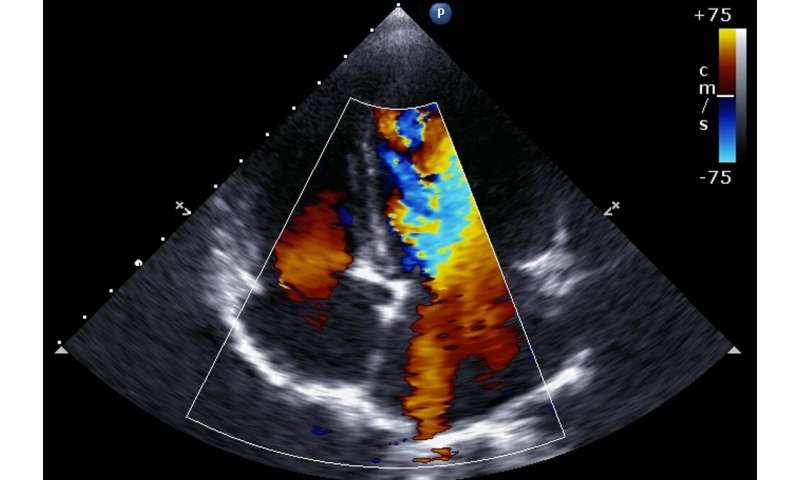 When a patient is hospitalized with COVID-19, signs of damage to the right side of the heart may indicate a greater risk of death, according to a study from investigators at Weill Cornell Medicine and New York-Presbyterian. The findings suggest that physicians should consider looking for such damage using a readily available and non-invasive ultrasound test called an echocardiogram.

Doctors commonly assess lung X-rays, medical history, blood-oxygen levels, blood markers of inflammation and other indicators to determine which incoming COVID-19 patients are most at risk of developing severe disease. In a study of 510 patients, published in the October issue of the Journal of the American College of Cardiology, the investigators found that signs of damage to the heart’s right ventricle on an echocardiogram are another strong and independent predictor of severe disease. Patients who had signs of impaired right ventricle pumping capacity were on average two and a half times more likely to die from COVID-19 during their hospitalization.

The heart’s right ventricle is the pump that pushes blood into the lungs to be oxygenated. Doctors have long known that problems affecting lung function, including inflammation triggered by respiratory viruses, can stress and impair this pump, usually by increasing the lungs’ resistance to blood flow. But the investigators believe the new study is the first to show that such an impairment is an independent predictor of COVID-19 mortality risk, with predictive value over and above that of other risk markers.

“We looked at the standard markers that are used to predict COVID-19 mortality, and right heart dysfunction was an even stronger predictor,” said lead author Dr. Jiwon Kim, an associate professor of medicine in the Division of Cardiology at Weill Cornell Medicine and a cardiologist at NewYork-Presbyterian/Weill Cornell Medical Center.

“This study tells us that non-invasive cardiovascular imaging plays an important role in decision-making in COVID-19 cases,” said senior author Dr. Jonathan Weinsaft, professor of medicine in the Division of Cardiology at Weill Cornell Medicine and a cardiologist at NewYork-Presbyterian/Weill Cornell Medical Center.

The researchers analyzed diagnostic and prognostic tests, and clinical outcomes, for a series of 510 consecutive COVID-19 patients, covering multiple ethnicities, who were admitted to NewYork-Presbyterian/Weill Cornell Medical Center, NewYork-Presbyterian Lower Manhattan, or NewYork-Presbyterian Queens and received echocardiograms from mid-March to mid-May. The research included a broad collaboration between investigators in cardiology, general internal medicine and biostatistics at Weill Cornell Medicine, and leveraged an institutional registry developed by Drs. Monika Safford and Parag Goyal.

The median age of the patients was 64, and two-thirds were male. Dr. Kim and colleagues found that patients with a standard sign of right ventricle damage, the expansion or “dilation,” of the pumping chamber, were 1.43 times as likely to die during initial hospitalization for COVID-19. Patients whose right ventricles showed significantly below-normal contraction while pumping—a condition called “right ventricular dysfunction”—were nearly 3-fold as likely to die. These two heart signs were relatively common in the patients, being present in 35 percent and 15 percent, respectively.

In the researchers’ analysis, no other standard marker of severe COVID-19 risk predicted mortality as strongly as right ventricular dysfunction.

The findings support wider use of cardiovascular imaging to assess the risk of severe COVID-19 and to tailor patient care accordingly, the researchers concluded.