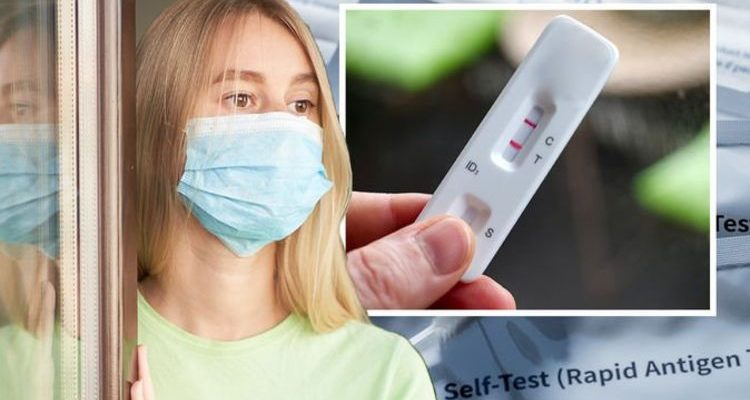 The Covid self-isolation period will be cut to just five days in England following new data from the UK’s Health Security Agency. The latest decision to relax isolation rules follows weeks of public pleas for the world to learn to live with coronavirus. With the new rules set to come into effect in a matter of days, what else do you need to know about the updated guidance?

When does five-day isolation begin?

From Monday, January 17, people in England who test positive for coronavirus will no longer be required to self isolate for seven days.

The new five-day rule means that Covid-positive individuals can leave isolation if they produce a negative lateral flow test on days five and six.

Previous guidance saw the 10 day isolation period slashed to just seven days if a negative lateral flow could be produced on days six and seven.

The updated rule is a reduced variation of the existing seven to 10-day rule.

What are the conditions of the new rule?

According to gov.uk, people self-isolating with COVID-19 will have the option to reduce their isolation period to five days but only if they produce two negative lateral flow tests and do not have a temperature.

Government guidance states: “Individuals who are still positive on their rapid lateral flow tests must stay in isolation until they have had two consecutive negative tests taken on separate days.”

Key conditions of the new rule include:

Health Secretary Sajid Javid said: “These two tests are critical to these balanced and proportionate plans, and I’d urge everyone to take advantage of the capacity we have built up in tests so we can restore the freedoms to this country while we’re keeping everyone safe”.

What should you do after you leave isolation?

Updated guidance from the Government recommends that those who leave isolation on or after day six should continue to wear a face covering and limit close contact with others.

Home working is still advised where possible and contact with anyone who is considered high risk should be kept to a minimum.

Gov.uk states that the default self-isolation period continues to be 10 days for those who are still experiencing a high temperature and continue to test positive beyond day six.

For unvaccinated individuals, the rules for Covid contacts have not changed.

Why has the Covid isolation period been cut?

The decision comes after ‘careful consideration’ by the Government following new data presented by the UK Health Security Agency (HSA).

The latest findings from the HSA found that two-thirds of positive cases were no longer infectious by day five.

With testing guidance having been updated earlier this week, the shift in England’s Coronavirus protocol is promising for businesses, education and the economy.

Mr Javid claims that the reduced isolation period makes England one of the freest countries in Europe, adding that Brits are “leading the world in how to live with Covid”, reports the BBC.

What is the science behind the decision?

While the isolation period may have been reduced, the threat of Covid still remains.

As part of the evidence considered by the Government, the HSA found that under current testing rules, around six percent of people will be infectious when released from isolation on day seven, following two negative lateral flow tests.

The new guidance will see this figure rise to around seven percent.

Gov.uk says: “The percentage of those released while infectious is reduced to around seven percent if people have two consecutive negative tests and then leave isolation from day six.”