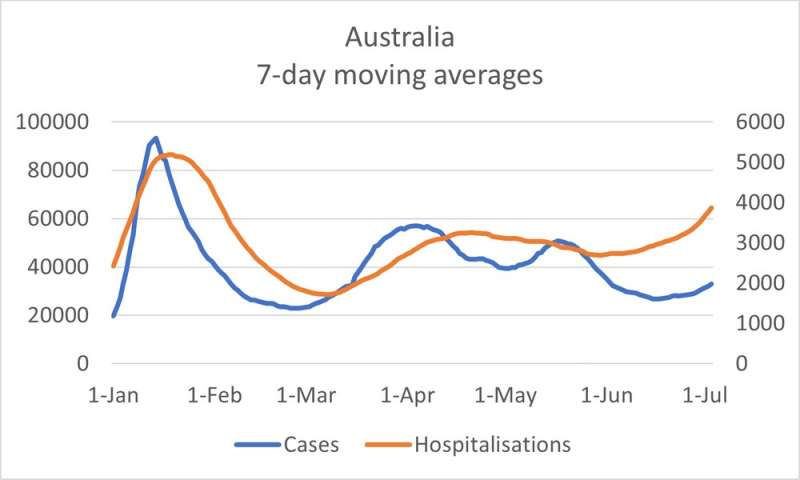 Australia is currently in its third omicron wave (second if you live in Western Australia). This one is caused by the subvariants BA.4 and BA.5.

Experts are worried our health system will soon be overwhelmed, and then there is the potential loss of loved ones. At this point, the number of COVID cases is rising but still well short of the peak seen early this year. Yet hospitalizations and deaths are nearing previous peaks. What is going on?

The first wave of omicron, caused by subvariant BA.1, began last November, with the epidemic curve rising sharply like a cliff face to about 100,000 cases a day nationally at its peak in early January.

The second wave, caused by omicron BA.2, had a gentler curve, and peaked at the end of March with more than 60,000 cases per day.

The BA.4 and BA.5 curve is looking gentler still, with current daily case numbers at about 40,000. The peak is expected in August.

It is unclear why we are seeing these changes in successive omicron waves, but it could be due to different levels of immunity in the population over time, along with changes in the genetic makeup of the subvariants.

People admitted to hospital with COVID

The graph above plots cases in Australia versus hospitalizations this year.

Clearly, since the beginning of June, hospitalizations have been increasing at a faster rate than case numbers. But does this necessarily mean BA.4 and BA.5 are causing a more severe disease?

Hospitalizations are a bit difficult to interpret as there is no agreed definition of what a hospitalization is. For example, do you include hospital in the home, or patients diagnosed after they have been admitted for something else?

Admissions to hospital intensive care units (ICUs) are much easier to interpret. If someone is admitted to ICU, they are critically ill. 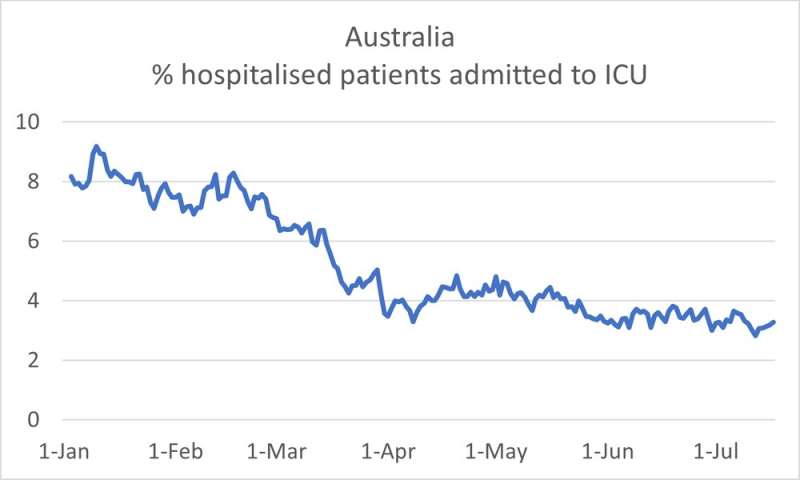 The chart above shows ICU admissions as a percentage of hospitalizations. The average time from being admitted to ICU after admission to hospital is one day, so no lagging has been applied here (with the same caveat about 2020 data as before).

Clearly, since the beginning of the year there has been a declining proportion of patients admitted to the ICU, and it has now leveled out at about 3.2%.

However, there are potentially many factors to consider. First, there are only a limited number of ICU beds, which could keep ICU numbers for COVID artificially low.

Lower numbers of COVID-19 patients in ICU could simply be a result of increasing deaths in ICU.

At the same time, better hospital treatment with antivirals such as Paxlovid, Lagevrio and Remdesivir, and monoclonal antibodies like Regdanvimab could be keeping hospitalized patients out of the ICU.

Winter sees an increase in respiratory diseases such as pneumonia, influenza and now COVID, as well as heart diseases.

Many people who are already in hospital may also have COVID, or may get COVID in hospital, but it’s not the primary reason they are there, and this has likely increased during the current winter season. 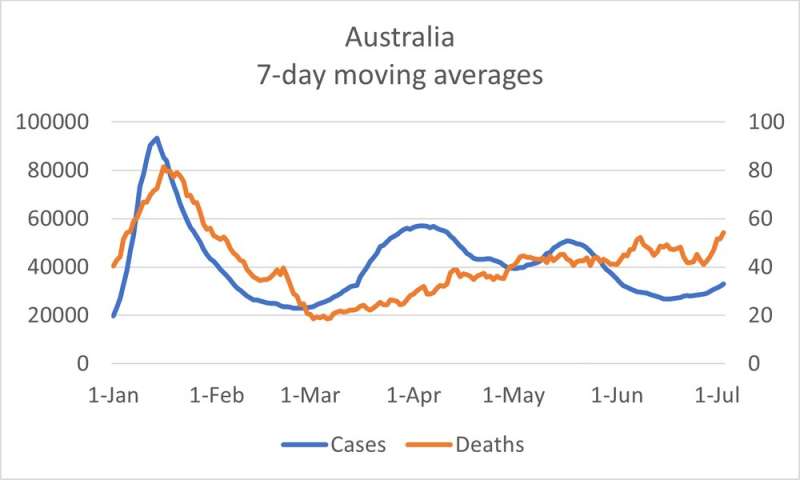 Cases that are undiagnosed or not reported

The number of diagnosed daily cases is only an estimate, with the true number of cases likely several times greater. This is because:

In other words, the increasing number of hospitalizations we are seeing might be due to more undiagnosed cases in the community in the past few weeks. This week, the South Australian chief health officer said sewage testing indicated there were likely many more COVID cases than those being reported.

Finally, the graph below plots cases in Australia versus deaths. As deaths likely occur on average two weeks after diagnosis, the cases have been lagged by 14 days (this estimate is based on 2021 data). In other words, cases on January 1, 2022, are plotted against hospitalizations on January 15, 2022.

COVID deaths are now going up at a faster rate than cases. Again, this could simply be because there are more people in hospital with COVID plus other illnesses because of winter, leading to a higher death rate. This could also be why we are seeing more deaths now.

So, a discussion about whether the current wave caused by BA.4 and BA.5 is leading to more severe disease is complicated. Even though the charts show hospitalizations and deaths increasing faster than case numbers, this could be the winter effect, under-diagnosis or under-reporting—or a combination of these factors.

Regardless, we do know our health system is under increasing pressure, with not only more patients, but also increasing numbers of doctors, nurses and ambos off sick with COVID.