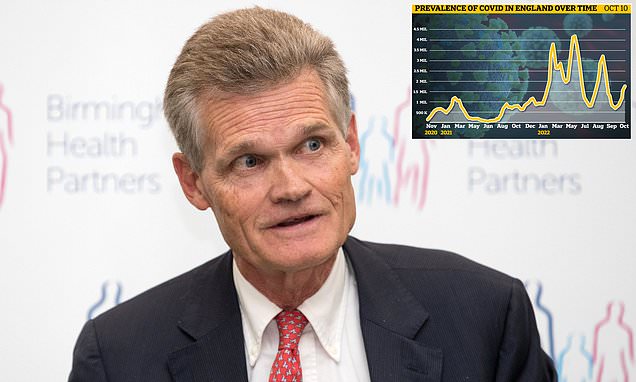 Brutal type of Covid which ‘terrified’ Britain and sent us into endless cycle of lockdowns ‘does not exist anymore’, claims ex-Government adviser

The Covid which forced Britain into an endless cycle of lockdowns ‘does not exist anymore’, an ex-Government adviser claims.

Oxford University’s Sir John Bell, who served as No10’s coronavirus testing tsar and was an early member of the vaccine taskforce, said the virus has radically changed since 2020.

Britain was forced to shelter from the virus before the vaccines came onto the scene, in order to save tens of thousands from dying and prevent the NHS from being overwhelmed.

‘That disease that we were all terrified of in the first iterations of the disease in 2020, which was that terrible pneumonia that put people in the intensive care unit, that disease essentially doesn’t exist anymore,’ Sir John said.

Sir John was responding to questions regarding the potential impact of Covid this winter on the BBC Radio 4’s Today programme.

He said although the virus was still present and would still make people ill, widespread immunity in the community had blunted coronavirus’s ability to wreak havoc on society. 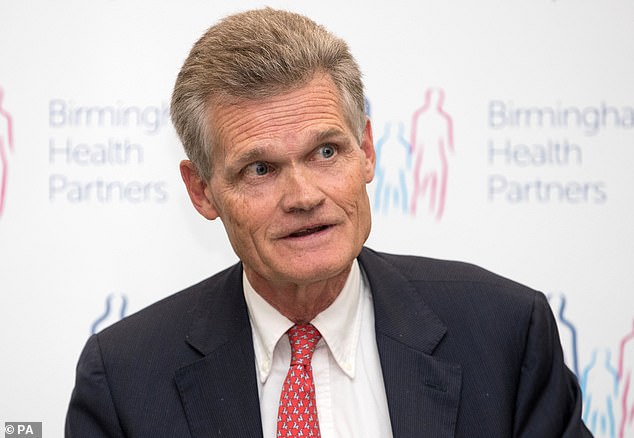 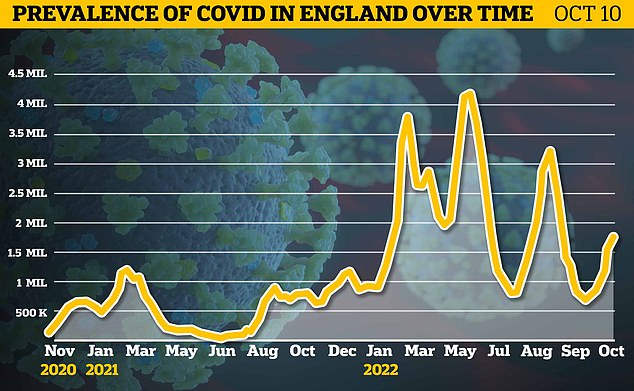 Statisticians at the Office for National Statistics (ONS) estimate 1.7million people in the country, or three per cent, were infected in the week to October 10. The figure, based on random testing of thousands of Britons, is up 12 per cent in a week. But the growth rate has slowed by a third in comparison to seven days earlier

At least three million Britons are set to take part in one of the world’s largest health research programmes.

The Our Future Health study hopes to use the huge amounts of data received to develop new ways to detect illnesses earlier.

Those taking part are expected to consent to providing DNA and blood samples over a long period.

It is hoped the research will help doctors better predict who is at higher risk of diseases such as cancer, diabetes, heart disease, dementia and stroke.

Professor Sir John Bell, chairman of Our Future Health, said the ambition is to develop new methods for ‘early diagnostics or prevention strategies across a large population of people – something between three and five million people’.

Invitation letters are being sent to people over 18 who live in four regions: West Yorkshire, West Midlands, Manchester and London.

‘People will feel a bit sick it’ll be a bit like the flu and you may have to stay home in bed and you won’t feel so well,’ he said.

‘But I think we shouldn’t have the sort of problems that we’ve had in the past.’

However, he added this was contingent on vulnerable people, including the elderly, getting a Covid vaccine ahead of this winter to reduce their chances of needing to go into hospital.

‘The older you get the more you’re going to suffer from this disease and it will lead to hospitalisations, that syndrome that puts you in the intensive care unit is rare, but you will get elderly people who’re frail hospitalised,’ he said

Sir John’s comments come amid signs that the recent resurgence is already levelling off in England, despite gloomy calls for face masks to return.

Analysts at the Office for National Statistics (ONS) estimated 1.7million people in the country, or one in 30, were infected on any day in the week to October 10.

The figure, based on random testing of thousands of people across the country, was up 12 per cent in a week.

But the speed of growth has slowed drastically.

Health chiefs said the downturn may be due to the ‘benefits from so many people taking up their Covid autumn booster’. Around 9million people have had the top-up.

Despite Covid appearing to level off, officials have warned there are signs the flu wave has started, with experts fearing a ‘twindemic’ — the resurgence of the virus combined with Covid — could cripple the health service this winter.

Professor Sir John added his voice to other experts calling on Britons to get the flu vaccine, warning that forecasts warned of a bad influenza season. 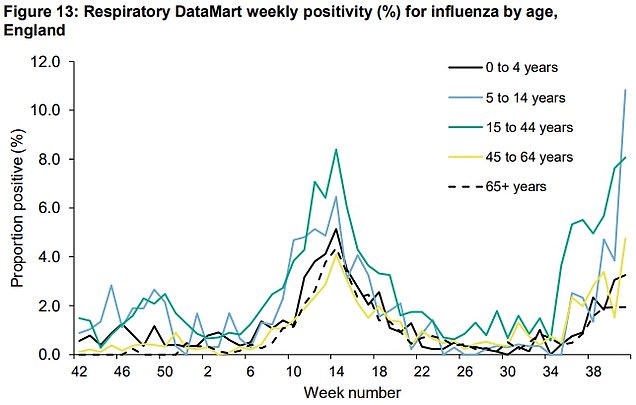 FLU: One in 24 people (4.1 per cent) with respiratory symptoms in England tested positive for influenza, based on samples taken from around 15,000 people suffering from a cough, runny nose and shortness of breath in the week to October 16. Flu cases were highest among five to 14-year-olds (light blue line), with one in five (10.8 per cent) with symptoms testing positive for flu, followed by 15 to 44-year-olds (green line) (8.1 per cent)

‘The Australians have had a very bad flu season which basically means that’s probably going to come over the hill,’ he said.

Australia’s winter flu season, which occurs during the British summer, is used by health authorities as a canary in the coal mine for what the virus will hold in store for the UK.

The latest data for England shows one in 24 people (4.1 per cent) with respiratory symptoms tested positive for influenza, based on samples taken from around 15,000 people suffering from a cough, runny nose and shortness of breath in the week to October 16.

Health chiefs have also reported a rise in people with flu-like illness booking GP appointments, calling NHS 111 and showing up at A&E.

And there has been a jump in influenza hospital admissions, with rates highest among under-fives in both standard wards and critical care.