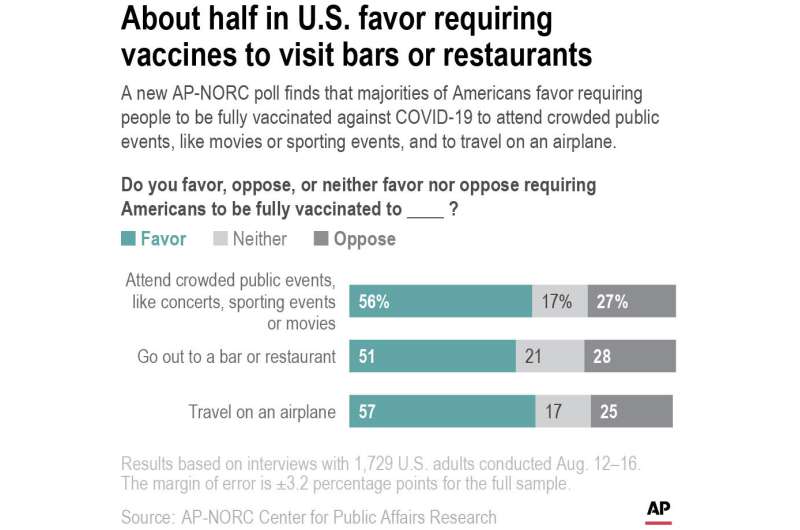 Anxiety in the United States over COVID-19 is at its highest level since winter, a new poll shows, as the delta variant rages, more states and school districts adopt mask and vaccination requirements and the nation’s hospitals once again fill to capacity.

The poll from The Associated Press-NORC Center for Public Affairs Research also finds that majorities of American adults want vaccination mandates for those attending movies, sports, concerts and other crowded events; those traveling by airplane; and workers in hospitals, restaurants, stores and government offices.

The poll shows that 41% are “extremely” or “very” worried about themselves or their family becoming infected with the virus. That is up from 21% in June, and about the same as in January, during the country’s last major surge, when 43% were extremely or very worried.

“I wouldn’t have said this a couple of years ago, but I’m not as confident as I was in America’s ability to take care of itself,” said David Bowers, a 42-year-old business analyst in the Phoenix suburb of Peoria.

Bowers, a Democrat, and his wife, a public school teacher, got vaccinated early. But they fret once again about their daughters, ages 7 and 9, attending school in a state whose Republican governor, Doug Ducey, signed a law to block school districts from mandating masks, let alone vaccines.

A brief summer respite from COVID-19 fatigue included a family trip to New York. “COVID was pretty much out of mind,” Bowers said. “Now it feels like we’re going backward.”

Close to 6 in 10 Americans say they favor requiring people to be fully vaccinated against COVID-19 to travel on an airplane or attend crowded public events. Only about a quarter of Americans oppose such measures. 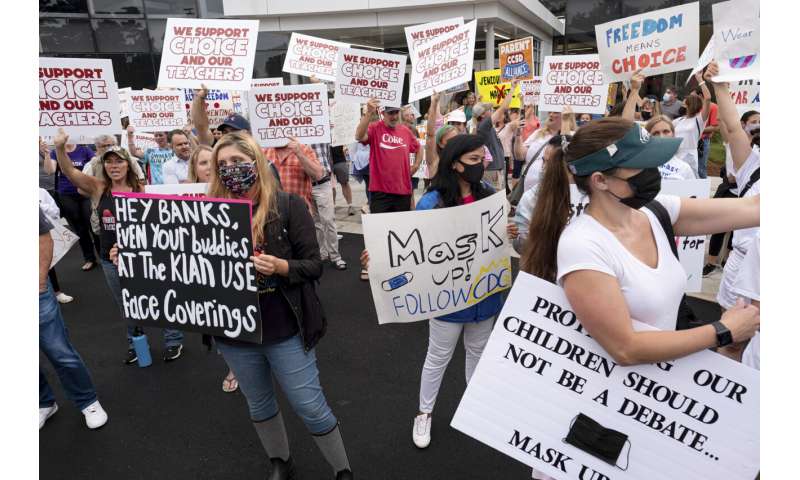 Roughly 6 in 10 also support vaccine mandates for hospital or other health care workers, along with government employees, members of the military and workers who interact with the public, such as in restaurants and stores. Support is slightly lower for requiring vaccinations to go out to a bar or restaurant, though more are in favor than opposed, 51% to 28%.

Nearly 200 million people, or just over 60% of the U.S. population, had received at least one vaccine dose as of Thursday, according to the Centers for Disease Control and Prevention. Just over half of the population was fully vaccinated.

Hospitals across the U.S. had more than 75,000 coronavirus patients as of last week, a dramatic increase from a few weeks ago but still well below the winter surge records. Florida, Arkansas, Oregon, Hawaii, Louisiana and Mississippi have set records for COVID-19 hospitalizations in recent weeks, and the surge in the delta variant, combined with low vaccination rates, has produced a scramble to find beds for patients.

The poll suggests that despite increasing cases and greater concern about the virus, Americans have not stepped up their own precautionary behavior since June, though at least half still say they always or often wear a mask around other people, stay away from large groups and avoid nonessential travel.

Confidence in vaccines to withstand virus variants has not waned, either, as U.S. health officials this week announced plans to dispense booster shots to all Americans to shore up their protection. The doses could begin next month.

Carla Jones, 37, of Lafayette, Louisiana, is a paraplegic with immunity problems and uses a wheelchair after she was severely injured in a car accident. Because of her health, she has been told by her doctor she cannot get the vaccine. She gets anxious visiting the doctor or when her grandchildren visit.

“I see someone next to me at the doctor’s without a mask, it makes my heart rapidly beat faster,” Jones said. 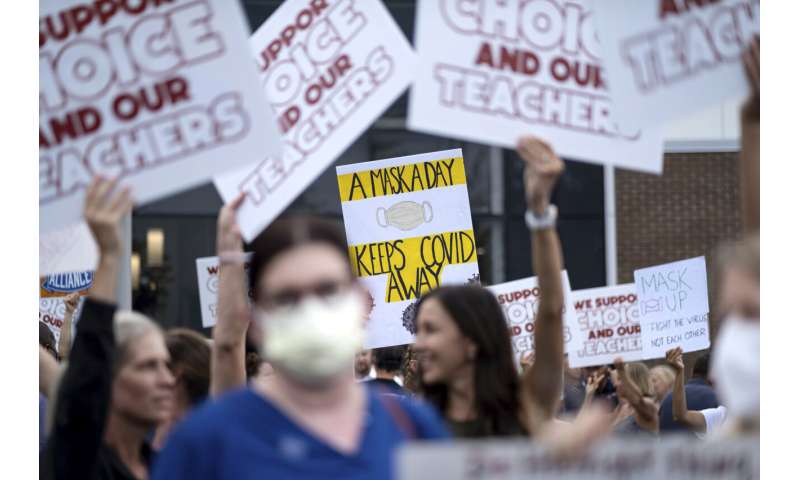 Jones, a Democrat, strongly favors vaccination and mask mandates, and not just for herself. “For the good of all,” she said. “I don’t have the shot, but I definitely wouldn’t want to pass it on to anyone else.”

The poll shows that 55% support requiring Americans to wear masks around other people outside their homes, while 62% support mask mandates specifically for workers who interact with the public, such as at restaurants and stores. Eighty-five percent of Democrats and 39% of Republicans are in favor of mask mandates for public-facing workers.

Robbie Allen, a 63-year-old retiree from Clifton, Texas, is fully vaccinated and will wear a mask when required by stores or other places. But the self-described independent who leans Republican insists it is a matter of personal choice, and he sees mandates as taking the joy out of life.

“The COVID is not going away very quickly, but I don’t think people should live in fear,” said Allen, who motorcycled with his girlfriend to this month’s Sturgis Motorcycle Rally, which attracted hundreds of thousands to the South Dakota city. “People are going to die, but if we all hunker down, life gets miserable.”

Partisan gaps are also wide on vaccination requirements. In Arizona, Bowers has already taken time off work to pick up his daughter from school after she developed a high fever. They spent hours last week looking for a drive-thru COVID-19 testing site that wasn’t overcrowded. She tested negative. But the worries persist.