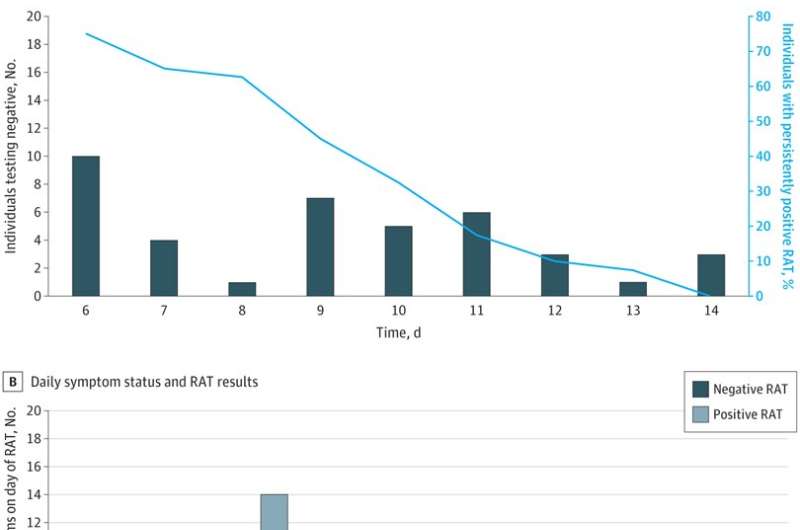 A team of researchers from Brigham and Women’s Hospital, the National Emerging Infectious Diseases Laboratories and the Broad Institute of MIT and Harvard reports that some people may be able to infect others for more than five days after initial infection. In their paper published in JAMA Network Open, the researchers describe how they tested infected patients using both rapid antigen tests (RATs) and viral cultures to learn more about how long infected people are able to pass along the SARS-CoV-2 virus to other people.

Current guidelines provided by the U.S. Centers for Disease Control advise isolating people infected with COVID-19 for five days after initial infection to prevent the spread of the disease. In this new effort, the researchers have found evidence suggesting that such a span of days may not be enough—at least for some people.

To learn more about how long people remain infectious after contracting COVID-19, the researchers enlisted the assistance of 40 people in the Boston area who were known to be infected and who were not expected to be at risk for serious symptoms. All of the volunteers had been vaccinated and received a booster shot. Also, at the time of the study, omicron BA.1 was the predominant strain. All of the volunteers were asked to fill out daily symptom logs and to self-test daily for COVID-19 using a Flowflex lateral flow RAT test, starting at day six of their infection. Each volunteer also submitted a culture swab for antigen testing each day, also starting at day six.