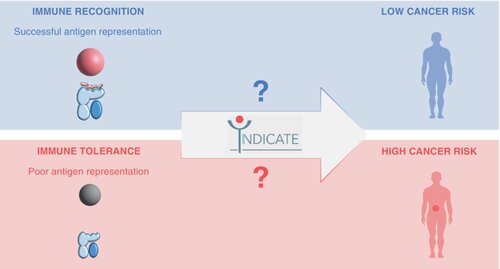 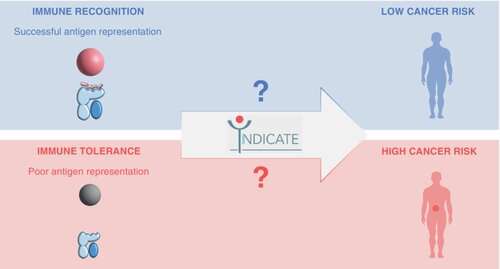 Genetic cancer predisposition is the most important measurable risk factor for cancer at a young age, and individuals affected by it require specialized medical care directed at prevention. The most common inherited cancer predisposition is the so-called Lynch syndrome, which affects approximately 400,000 individuals in Germany and 3.5 million individuals in Europe; carriers have a substantially elevated risk of developing tumors of the large bowel and, in women, the uterus, early in life. However, cancer risk varies widely (30–80%) among individuals even within one family.

“More precise cancer risk estimates would enable a personalized approach to cancer prevention in Lynch syndrome and beyond,” says Aysel Ahadova, tumor biologist and local project coordinator of INDICATE. Matthias Kloor, project leader of INDICATE, adds, “One crucial characteristic of Lynch tumors is the induction of a strong anti-tumor immune response. The key link in the process of tumor cell recognition by the immune system are Human Leukocyte Antigen (HLA) molecules.”

In a previous study, a team of interdisciplinary scientists from Applied Tumor Biology (ATB, Heidelberg University Hospital and the DKFZ), and the Data Mining and Uncertainty Quantification (DMQ) group at HITS had shown that the HLA type can influence the potential of the immune system to eliminate cancer cells (Ballhausen et al, Nature Communications 2020). In a second step, they aim to examine whether this influence could be reflected in the individual cancer risk of Lynch syndrome carriers.

“The associations of certain HLA types with disease susceptibility have been shown for virus infections, however, in cancer this aspect is poorly understood. Lynch syndrome is an ideal model to address this question for the first time in a systematic manner,” says Vincent Heuveline, group leader of DMQ.

To explore the role of the HLA type in defining Lynch syndrome carriers’ cancer risk, the scientists initiated an international collaborative study with the central coordination in Heidelberg (INDICATE, Individual Cancer risk by HLA Type, indicate-lynch.org). Together with their partner institutions—the University Hospital Bonn, Germany, and expert centers from the United Kingdom, Finland, the Netherlands, Norway, and Hungary—they published a paper in the International Journal of Cancer, describing the interplay between the HLA system and human disease susceptibility and announcing the launch of INDICATE.