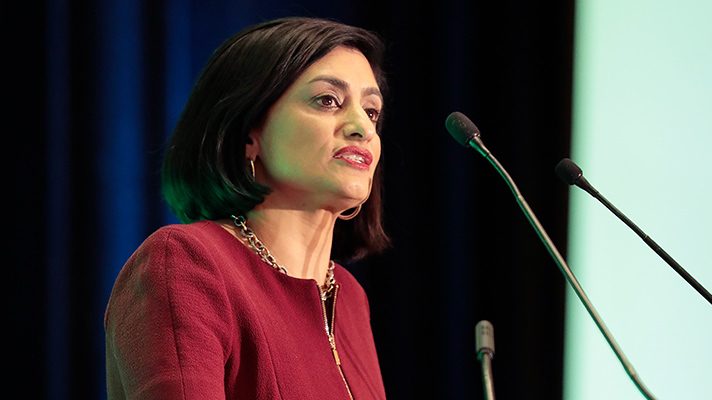 Verma, a well-documented opponent of single-payer healthcare, has her eyes set on cutting down on paperwork and reevaluating regulations as a means to facilitate technological innovation.

“One of the things that troubles me in terms of how we go forward with technology and innovation and harness that to solve some of our most difficult problems is there has been a lot of discussion about government-run healthcare around ‘Medicare for All.’ I think those proposals are the greatest threat to innovation in healthcare. The reality is government has often been a barrier to innovation.”

Those technological advances are crucial to the future, as the burden of healthcare costs continues to grow, she said.

“To give you some context for how we are looking for technology and innovation at CMS, one of the things we think about every single day is the cost of healthcare,” she said. “Our actuaries are telling us that by 2020 we’ll be spending almost 20 percent of every dollar spent in the United States on healthcare, which is simply unsustainable. The solution is not to ration care but to think about ways we can deliver care in a more efficient way that is still providing high value, good quality, but just at a lower cost.

AI a roadmap for future care

It would be hard to discuss the future of healthcare without the term “artificial intelligence” cropping up, and Verma’s remarks were no different.

Verma pinpointed a number of opportune areas for CMS to implement the technology, including organizing claims data and helping researchers access that data.

“If you look at CMS, we are the largest insurer between Medicare and Medicaid and the exchanges. We are serving over 130 million patients, and we are making efforts to make that data more available,” she said. “The idea here with AI is, Could we invite innovators to use our data to provide the type of analytics and tools so that our providers can identify potential high-cost situations? So in particular we are focusing in on patient admissions, and we are also focusing on admissions to skilled nursing facilities that are unplanned.”

At the end of March, CMS announced a new contest, called the Artificial Intelligence Health Outcomes Challenge, which aims to speed up the development of new artificial intelligence technologies that can better predict health outcomes and boost quality of care. The initiative is a partnership with the American Academy of Family Physicians and the Laura and John Arnold Foundation and seeks to “unleash” new and innovative tools to help with the push toward value-based care.

“Last year we announced for the very first time that we were making data available for our Medicare Advantage members. That has never been done before; that is providing data on 30-something percent of the population,” Verma said.

In the future, the plan is to make Medicaid data available to researchers.

“Again, this is a population of pregnant moms, children, disabled population, aging seniors. It is a unique population set,” she said. “So we are making that data available to researchers, and we think there is a lot of potential to analyze that data. Again, that is something where AI can come in.”

Security an important focus for CMS

When innovating for CMS, security continues to be a focus. Verma stressed the importance of giving patients access to their own data and creating strict guidelines for researchers using CMS data.

“We are dealing with a very vulnerable population—whether that is our senior population in Medicare or our patients in Medicaid. When we think about policy in CMS, one of the major goals and our main theme is patients first. In everything we do, we try to put ourselves in the shoes of the patient: How would we want our data to be used?”

But Verma said security is not a static component, rather a fluid part of innovation, which is consistently evolving.

While Verma pointed to roadblocks in government and the importance of keeping data secure, she remained optimistic about the future of innovation in healthcare. She ended with a message warning against government control of innovation.

“I think we are at a turning point in healthcare. We are at an amazing opportunity or crossroads where we have all of this information that is now readily available and we have the tools to move forward. And I think what we need to do is get government out of the way and make sure we are supporting innovators to do what they do best,” she said. “I think we all have to recognize the important role that the U.S. plays in bringing innovation to the entire world, and recognize it is the private system that we have in place that is spurring innovation, and be very careful about those initiatives that would put more government in control and would thwart innovation going forward.”