In March 2020, with the first wave of lockdowns looming, many Australians thought to seize the moment and turn the enforced home time into a mini season of The Block: Garden Week. Bunnings’ queues and profits increased (earnings grew 13 per cent for the 2019-20 financial year), and nurseries were picked over quick. “It was a mad time,” says Josh O’Meara, Director of The Jungle Collective – Australia’s biggest pop-up plant nursery company, which host pop-up sales around the country.

“Stuck at home, people went crazy with plant purchases. There just weren’t enough plants going around in the end. Lockdown also coincided with winter, which is when there’s always shortages of plants anyway so it was really a bit of a challenge.” 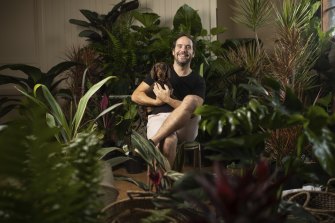 Josh O’Meara, co-owner of The Jungle Collective, a pop-up plant nursery during the Canberra warehouse sale on Friday. Credit:Alex Ellinghausen

Early surges were in food plants and seedlings, but it soon flowed to decorative and indoor plants, particularly as the initial upside-gazing of COVID measures waned. It became less about home improvement and more about mental health. To those stuck at home, jobless, overwhelmed, lonely or anxious, plants offered something else: a reminder that things are changing, time is moving, and a sense of achievement.

It’s a concept that Melbourne-based O’Meara understands well. Three years ago, he had a concussion (his 12th in fact, the result of too many knocks playing Aussie Rules football) that meant he was largely homebound. Unable to read, look at a screen or do too much physical activity, he got into plants. “It was a slow pace that I could really handle, but also that optimistic thing, when you’re recovering, and things are moving pretty slow, seeing that new leaf grow is uplifting and a reminder that things keep getting better. I think with lockdown, people found that same thing.”

Almost a year on from the first lockdown, it’s a different story. “A lot of growers expanded to keep up with the crazy demand and added more variants. So now is the perfect time to buy because everything is starting to get big and look really good again.”

COVID might have given plants the biggest boom since the fiddle leaf fig became a trendy home must-have in 2016, but with more variants available, prices a flutter and having a happy home space more important than ever, what should we be growing? Here’s how to be a cool, calm plant parent in the golden age of greenery.

“Fiddles and monsteras, giant birds [of paradise], rubber trees and Bangalow palms, they’re all nice, beginner plants,” says O’Meara, adding that the fiddle leaf fig is still a phenomenon, particularly when it gets big, (which, if you bought one five years ago, yours may be).

Melissa King, horticulturalist and Northcote Pottery Ambassador agrees, “The fiddle leaf fig will always have a special place in peoples’ homes, for its big bold foliage and the height and drama it brings to a space.” It has, however, been surpassed. “The monstera deliciosa is the standout seller at the moment,” says O’Meara. Also known as the Swiss cheese plant (because of its holey leaves), this Monstera has similar oversized, but greener leaves than the fiddle and grows wide as well as tall.

“Now that people have mastered the art of growing fiddles, they have moved on to more striking and unusual indoor beauties like the white variegated monstera, which has developed a cult following or plants that green your home without the hard work,” says King.

Which path you choose probably has to do with how much success you’ve had. If you need something that survives being ignored, our experts suggest a Zanzibar Gem, devil’s ivy, philodendron ‘brasil’ or mother in law’s tongue (sansevieria). “It’s virtually indestructible and has a wonderful spiky architectural form”.

According to O’Meara, there’s the mainstream popular, and the rare popular. “Once people start getting into the rare factor, it gets wild. They are the ones that suppliers struggle to keep up with the demand so the price just goes up and up and up. Some of these plants are selling for $10,000. It’s mad.”

If you’re looking for rare, but popular, he suggests the Variegated Epipremnum pinnatum. The name might not be as catchy, but it is very pretty. Its heart-shaped leaves appear almost acid washed, with as much creamy white as green on the leaves. “The one to look out for,” says O’Meara. “They aren’t that expensive yet, considering how good they are, if you got in now, you’d be ahead of the wave.”

Pinterest predicted the Japandi aesthetic to be the minimalism makeover décor lovers would swoon over in 2021. The Japanese Scandinavian mash up requires sleek designs, neutral colour palettes and a seemingly impossible indoor tree. O’Meara, who has a five-metre Illawarra flame tree growing in his living room, says while not impossible, indoor trees require more work.

“Pests are more likely. Outside they have predators and it usually balances out, but indoors they are protected, so you want to know what you’re doing in terms of pests and making sure the position is optimal for light.” If you’re up for the challenge, he recommends a Ficus, “it can handle lower light.”

Understanding your space is key, says O’Meara. “Analyse where the light is. If it’s warm or drafty. Then do a little bit of research on what species will be best for that area.” Once they’re in, perfect your watering, “overwatering is one of the biggest killers of indoor plants,” says King.

“So, before you get out the watering, do the ‘finger test’. If the soil is dry down to your second knuckle it’s time to give them a drink and make sure water doesn’t accumulate at the bottom of your indoor cover pots or tray.”

Drainage holes are important people! If you’re guilty of over, or under watering your plants, try a self-watering version.

Then it’s down to a little bit of housekeeping, “I use a moist cloth to wipe down the leaves of my house plants from time to time to prevent an accumulation of dust. I’ve even been known to pop them in the shower every month or so to remove any build-up on the foliage and make them look all shiny again,” says King. If a leaky watering can wetting your rug and carpet is your main watering deterrent, O’Meara suggests a spray gun. “More control, but slower. You have to pick your battles, but it definitely creates less mess.”

Get a little more outta life

Start your week with practical tips and expert advice to help you make the most of your personal health, relationships, fitness and nutrition. Sign up to our Live Well newsletter sent every Monday.