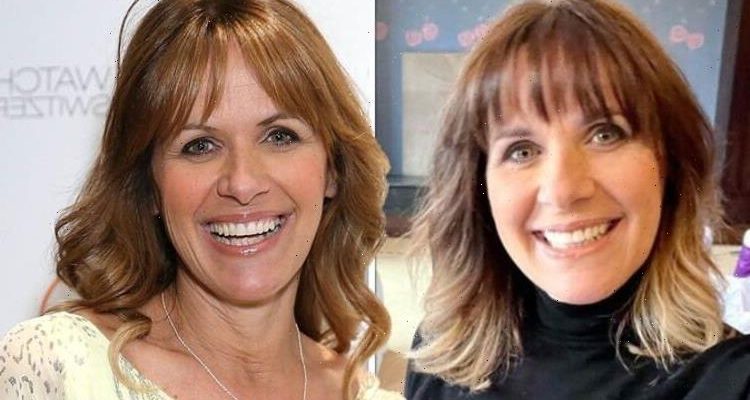 Currently appearing on Richard Osman’s House of Games, Smillie has also appeared on Strictly Come Dancing and Lily Savage’s Blankety Blank. But it was back in 2017 during an interview with the MailOnline, that Smillie revealed how the menopause caused her to “thicken up around the waist”, and spoke plainly about the other effects the “change” has had on her body.

The former model said: “There’s a definite change in your body and you know, I don’t love that.

“But why should I be any different from anyone else, I think I’ve come off quite lightly because I’m not sweating like a beast and getting angry all the time.”

The mother-of-three went on to say: “You thicken up around the waist.

“I don’t love it but you know nobody loves ageing do they? You just change shape.

“You gain a little more weight but it’s just placed differently. It’s like you almost lose your waistline.

“It’s not a fatness it’s a straightening of the sides. It’s very strange.”

Continuing to explain how she is dealing with these natural yet undesirable changes: “And then your chest, your decolletage, sort of wrinkles and you think ‘What’s that?!’ It’s just awful isn’t it.

“I could go like crazy and join a gym and start leaping around but I’m not great at that either.

“I think you start to dress differently because you think, ‘Right that doesn’t make me look my best, I’m going to go for a bit more draping around there.’ Stick to skinny legs and baggy tops.”

The Liverpool Women’s NHS Foundation Trust explains that during menopause, fluctuating and falling hormone levels can affect the way individuals store fat. Similar to when teenagers going through puberty store what is referred to as “puppy fat”, individuals going through menopause develop “insulin resistance” making bodies store calories rather than burn them.

The Trust explains: “An extra pound before the pre-menopause will settle evenly over hips, bottom, thighs and arms. After the menopause it all goes round the middle!

“This leads to more of an apple than a pear shape – hence the term ‘middle age spread’. So, even a small weight gain can result in a change of clothing size.

“We tend to move less too – aches and pains and stiffer joints as well as fatigue makes exercise seem impossible. The menopause can also play havoc with bladder control which can put some women off exercising. All of which means we burn up less energy.

“We also lose muscle mass – known as sarcopaenia – at around eight percent per decade after age 40. Muscle is more metabolically active – meaning it burns more energy – helping us to lose weight even when we are sitting still.

As well as weight gain, menopause can cause a variety of uncomfortable or irritating symptoms, around the ages of 45 and 55.

For those with menopausal symptoms, talking to a GP or medical professional may help as they are able to offer treatments and suggest lifestyle changes. Treatment often includes hormone replacement therapy (HRT) or cognitive behavioural therapy (CBT).

HRT – which can be taken in multiple different forms – replaces the hormones that are missing. Most symptoms are caused by low oestrogen levels, so this is the most important hormone to replace.

In order to manage and tackle weight gain during menopause, the NHS recommends specific lifestyle changes including the following: