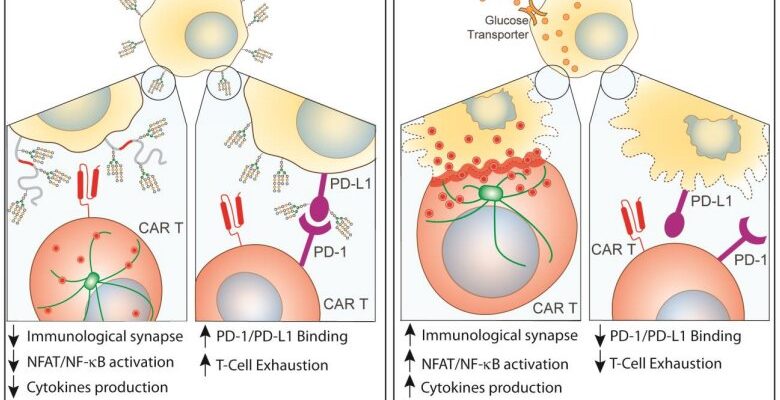 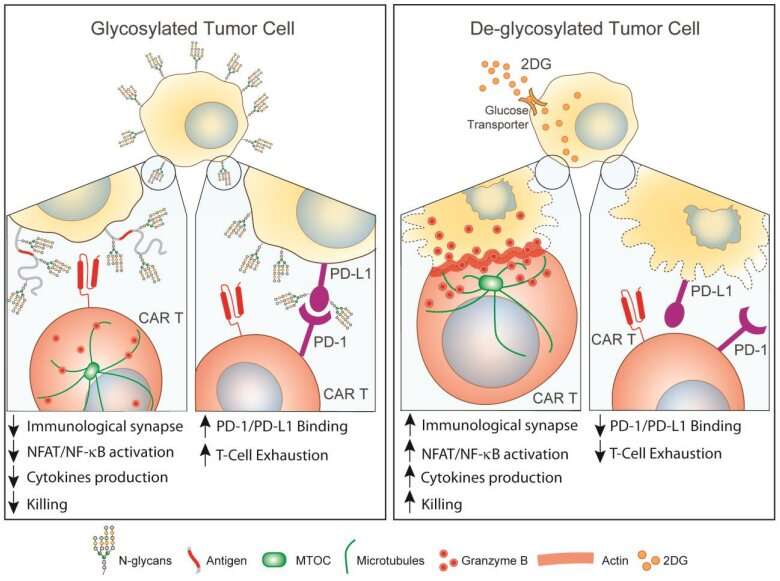 CAR T cell therapy, the breakthrough method of supercharging patients’ T cells in the lab to attack cancer when re-infused, has worked more effectively against cancers of the blood than solid tumors.

Now, in new research aimed at finding out why and how to overcome the problem in solid tumors, scientists in Milan, Italy, have discovered that solid tumors shield themselves in a sugar coating that renders them resistant to CAR T cell attack. Beatrice Greco and colleagues in the Innovative Immunotherapies Unit at IRCCS San Raffaele Scientific Institute are exploring ways to overcome it. They are devising a molecular torpedo that can break the sugar shield, which, in turn, clears a path for CAR T cells to home in and destroy solid cancers.

CAR T cells—chimeric antigen receptor T cells—start out as a patients’ own T cells isolated from a blood sample. Next, the cells are primed in a laboratory using a genetic modification process that causes T cells to express a cancer-seeking-and-destroying receptor on their surface.

Despite many years of research, medical scientists have not been able to coax supercharged T cells to function as efficiently against solid tumors as they have for hematological malignancies. And glycosylation of the cancer cell surface, the process of cancer cells fortifying themselves in a thick coat of sugar molecules, has led to difficulties using CAR T against a variety of solid tumors.

Laboratory studies involving animal models suggest a solution to the sugar problem may make its way into human clinical trials in the not-too-distant future.

“Immunotherapy with chimeric antigen receptor–engineered T cells showed exceptional successes in patients with refractory B cell malignancies,” Greco wrote in Science Translational Medicine. “However, first-in-human studies in solid tumors revealed unique hurdles contributing to poor demonstration of efficacy. Understanding the determinants of tumor recognition by CAR T cells should translate into the design of strategies that can overcome resistance.”

It’s not just a sugar problem that prevents CAR T cell therapy from working in solid tumors, although the carbohydrate coat has been the biggest barrier to successful treatment. The microenvironment of solid tumors aids in the prevention of CAR T cells from properly infiltrating the tumor site. Additionally, solid tumors also possess few antigens that CAR T cells can readily recognize and zero in on.

Researchers worldwide are working on ways to overcome these barriers, but more work is needed to understand the factors that influence whether a CAR T cell can recognize and interact with its malignant target, scientists in Milan say.

To learn why virtually every type of solid tumor is resistant to CAR T cell therapy, Greco and colleagues looked for what these cancers had in common when it comes to cells shielding themselves against destruction. The team found that “multiple carcinomas express extracellular N-glycans, whose abundance negatively correlates with CAR T cell killing.”

Picture this as a process the process of building a chain with multiple units, linking together over and over again. Each each time an oligosaccharide attaches to an exposed asparagine, that’s another link in the chain. The end result is tight chain of sugar molecules having built a fortress on cancer cells. At the macro level, of the tumor is shielded in sugars that keep cancer free from attack. Greco and colleagues say N-linked glycosylation is the key to solid tumors’ resistance to CAR T cell immunotherapy.

By including a sugar analog—an anti-sugar molecule that serves as a torpedo—along with the CAR T cells, the killing power of the emboldened T cells can be enhanced, Greco and colleagues found. And because cancer cells have a multitude of methods to evade any form of treatment, she and her team say that incorporating the anti-sugar molecule into CAR T cell treatments can help overcome multiple tricks that tumors may use to protect themselves.

Pancreatic cells lavishly shield themselves in the carbohydrate compounds—N-glycans—on their surface. The N-glycans function as a force field against CAR T cells in pancreatic cancer. The malignancy is one of the most difficult cancers to treat. Being able to use CAR T cell immunotherapy could add to the armamentarium that doctors may one day rely on.

To address the sugar coating problem, the team used a molecular torpedo—a 2-deoxy-D-glucose—a sugar analog that can inhibit the synthesis of N-glycans. The researchers found that treating pancreatic tumors in mice with 2-deoxy-D-glucose broke down the N-glycan shield coating tumor cells, leaving them more vulnerable to CAR T cell therapy.

While researchers in Milan and beyond are working on ways to overcome barriers to CART T cells’ ability to destroy cancers, more work is needed to understand the factors that influence whether a CAR T cell can recognize and interact with its malignant target.

Even among hematological cancers estimates in a flurry of recent studies suggest that CAR T cell therapy has only a 30–40% rate of success for durable remission. That means a significant number of patients aren’t benefiting from the treatment’s promise.

To improve the odds, medical scientists in laboratories worldwide are searching for ways to make CAR T cell cancer therapy work more efficiently for both hematological and solid cancers.