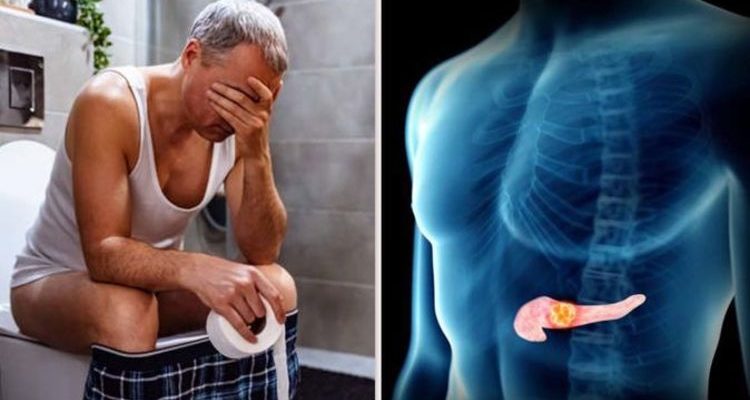 Adele Roberts says her cancer diagnosis 'was a shock'

Pancreatic cancer is the 10th most common cancer in the UK, and some of the signs may be hard to spot. Many people know that some cancers, such as bowel cancer, can show signs in your bowel movements, and the same is true for pancreatic cancer. Pancreatic cancer is usually not found until the advanced stages because it can be hard to detect, so it is important to go to a GP if you think you may have symptoms.

Sadly, around one in two people will develop cancer at some point in their lives, according to the most accurate forecast to date from Cancer Research UK.

Pancreatic cancer is a cancer that’s found anywhere in the pancreas, which is an organ in the top part of your tummy.

There are several signs to look out for, though Cancer Research notes: “Pancreatic cancer doesn’t usually cause symptoms in the early stages. As the cancer grows it can start to cause symptoms.“The symptoms vary depending on where the cancer is in the pancreas (in the head, body or tail of the pancreas).

The most common type of pancreatic cancer starts in the cells that produce digestive juices and is called an exocrine tumour.”

Pancreatic cancer may not have any symptoms, or they might be hard to spot, so it is sometimes dubbed the “silent disease”.

Pancreatic cancer UK says: “Some people see their GP several times before getting a diagnosis.”

The charity adds: “If you have unexplained symptoms that last four weeks or more, go back to your GP until you get a firm diagnosis, or a referral for tests to find out what’s causing them.”

The charity outlines several changes to bowel habits that could be signs of the cancer.

It says: “Pancreatic cancer can cause diarrhoea (runny poo) and constipation (when you find it harder to poo).

“If you are over 60, have lost weight and have diarrhoea or constipation, your GP should refer you for a CT scan or ultrasound scan within two weeks.”

It adds that pancreatic cancer can also cause a number of signs as a result of fat in the poo.

“It happens if pancreatic cancer has affected your digestion, so that fat in your food isn’t digested properly.”

Pancreatic cancer UK notes that pale, oily poo “which is called steatorrhoea” is a sign.

It adds: “Poo may be large, smell horrible, float and can be difficult to flush down the toilet.”Pancreatic cancer can cause jaundice by blocking the bile duct. If you have jaundice, your GP should refer you urgently for a CT scan.

Pancreatic Cancer UK says: “Go to your GP if you have symptoms of pancreatic cancer, you don’t know why you have them, and they last four weeks or more. If you have jaundice, go to your GP straight away.”

The charity explains that signs of jaundice include the whites of the eyes taking on a yellowish hue, as well as the skin, dark urine, pale poo and itchy skin.

Cancer Research says that pain in the stomach area or back is a common sign in those with this cancer.

The charity says that almost seven out of 10 people, 70 percent, with pancreatic cancer go to their doctors because they have pain.

“Pain is more common in cancers of the body and tail of the pancreas. People describe it as a dull pain that feels as if it is boring into you.”

The charity adds: “It can begin in the stomach area and spread around to the back. The pain is worse when you lie down and is better if you sit forward. It can be worse after meals.”