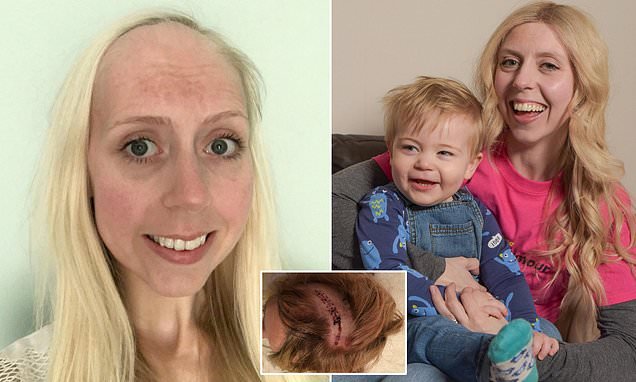 ‘I was reminded of my cancer every time I looked at my reflection’: Terminal sufferer, 33, left with a bald patch following chemo has a ‘revolutionary wig fitted with SUPER-GLUE’

A mother who was left half bald following treatment for her brain tumour is now showcasing her luscious locks thanks to a ‘revolutionary wig fitted with super-glue’.

Katie Smith, 33, from Stourbridge, West Midlands, was first diagnosed with a grade 2 brain tumour in 2015.

After undergoing surgery and thinking she had beaten the disease, she was devastated to discover the growth had returned last March.

Despite enduring a second surgery and radiotherapy, Mrs Smith then received the devastating news her cancer is incurable, with doctors only being able to control the ‘ticking time bomb’ via chemotherapy.

Along with her terminal prognosis, Mrs Smith also had to come to terms with her devastating hair loss, which left her bald at the front part of her head.

Convinced strangers were laughing at her, Mrs Smith even avoided her own reflection until hair-loss specialists covered up her bald patch with a semi-permanent wig for free. 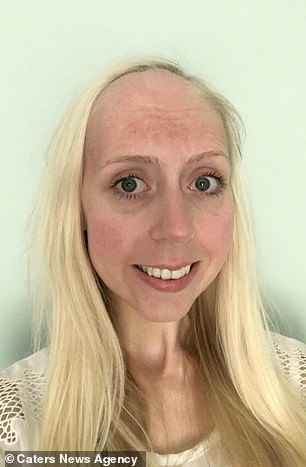 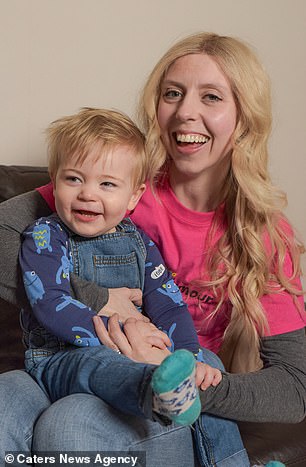 Katie Smith (pictured left before the ‘wig’ was fitted) was left half bald following chemo for her incurable brain tumour. Convinced people were laughing at her, the mother-of-one (pictured right with her one-year-old son Eli) had special hair pieces fitted using a ‘revolutionary glue’ 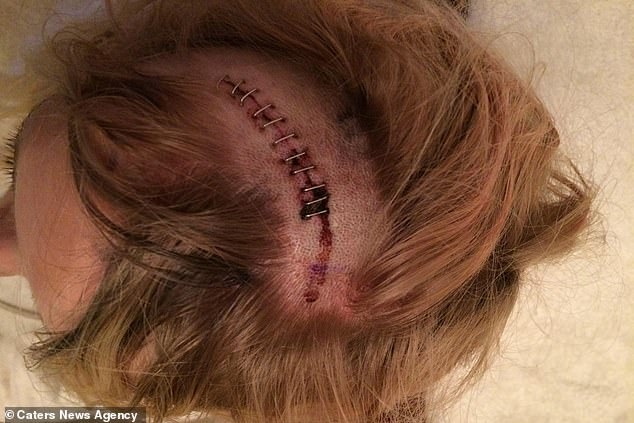 After being diagnosed in 2015, Mrs Smith was relieved when her first surgery seemed to be a success, only for her cancer to return last March. Her scar is pictured after her second operation on June 11 2018. Doctors then said they could only control her symptoms via chemo

Speaking of having her ‘wig’ fitted, Mrs Smith said: ‘I was halfway through my treatment and most of the hair on the front part of my scalp had fallen out.

‘I looked sort of like Gregory David Roberts and I was nervous about showing my head to people who didn’t know me or had no idea about who I was before my hair fell out.

‘I’d lost a lot of confidence by this point and I thought people were just going to laugh at me or worse still, give me the pity stare. It massively affected my quality of life as I was reminded of my cancer every time I looked at my reflection.’

Mrs Smith was then ‘over the moon’ when she discovered treatment was available for her hair loss, which would help her feel like herself again.

‘I was measured up for the hair piece and a sample was made,’ she said. ‘It’s amazing as it doesn’t prevent hair growth if it was to start growing underneath in the future.

‘The hair systems they provide are made from real hair that is woven into a membrane, coloured to your preference, and is stuck down to your head.

‘The rest of your real hair, if you have any left, is then cut, styled and blended in with the pretend hair.

‘This means not only are these hair systems very realistic, but they are also semi-permanent so a person wearing one can swim, shower, go to the gym and basically do anything they like without the fear of a wig falling off.’

Optima, the company behind the ‘wig’, even carried out the procedure free-of-charge after hearing about Mrs Smith’s ordeal. 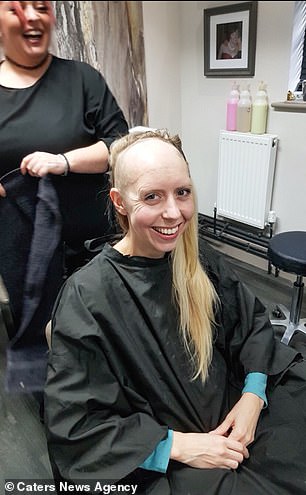 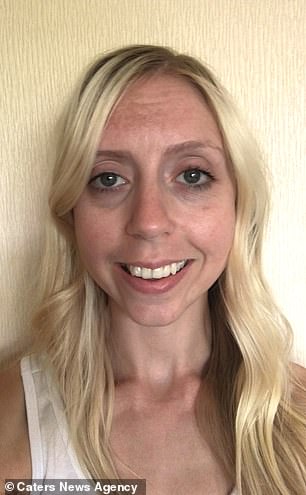 As well as coming to terms with her terminal prognosis, her hair loss (seen left) was another blow. She is pictured having hair pieces fitted to the front of her head using specialist glue. Pictured right afterwards, Mrs Smith says she is no longer ‘constantly reminded’ of her disease 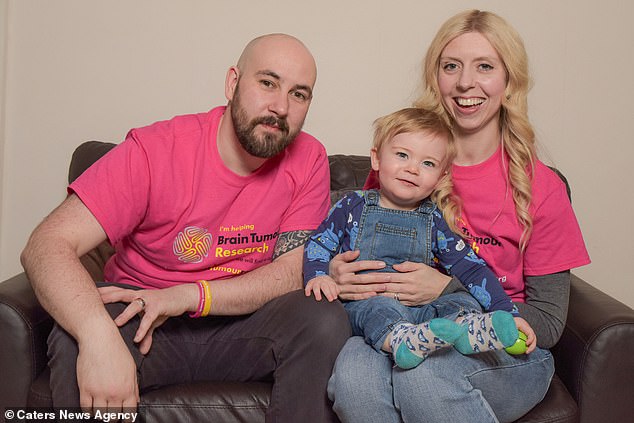 Mrs Smith (pictured with her son Eli and her husband Luke on January 3) tries hard to stay positive despite her prognosis. But she still describes her tumour as a ‘ticking time bomb’

HOW ARE BRAIN TUMOURS GRADED?

Brain tumours are graded 1-4 according to the speed they grow and the risk they will spread to other parts of the brain or spinal cord.

Around 4,300 people in the UK are diagnosed with a low-grade, slow-growing tumour every year, while 5,000 are told they have a high-grade growth.

In the US, around 80,000 people a year are diagnosed with a brain tumour. It is unclear what proportion of these are low or high grades.

Low-grade tumours are unlikely to spread and have a low risk of returning if they are completely removed. They tend to have well-defined edges.

But they can still press on or damage nearby areas of the brain, and block the flow of cerebrospinal fluid that nourishes and protects the vital organ.

High-grade tumours are more likely to spread and come back even if they are intensively treated.

Surgery, along with radiotherapy or chemo, is usually required.

Some tumours are ‘mixed grade’ and contain cells of different grades. These are graded according to the highest grade they contain even if the majority is low grade.

Mrs Smith was diagnosed after she began to feel unwell while on her honeymoon with her 35-year-old husband Luke.

‘I started suffering from headaches but the pain quickly became so severe that I ended up in A&E,’ she said.

‘I was diagnosed with a brain tumour after an MRI and needed surgery to remove the mass.

‘After being given the all-clear I gave birth to my son Eli in 2017, which was amazing after everything we’d been through.’

But Mrs Smith’s relief did not last long, with her being told the growth had returned last year and is now incurable.

‘It was a shock when I was told the tumour had returned and my diagnosis is now terminal but doctors are trying their best to keep [it] stable with chemotherapy,’ she said.

‘The brain tumour I have is literally a ticking time bomb but I’m trying my best to stay positive.

‘Eli keeps me and Luke distracted, and now that I have my hair back, I’m not constantly reminded of my hair loss which is great.’

Mrs Smith has her hair pieces refitted every few months while she continues to undergo chemo.

Mrs Smith is speaking out to raise awareness of brain cancer and to help raise money, along with her husband, towards the charity Brain Tumour Research. 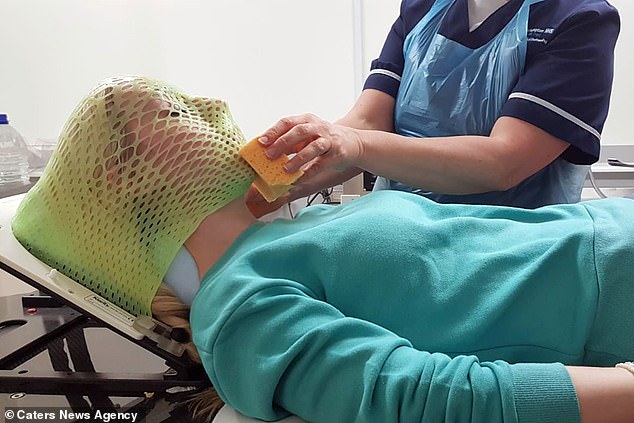 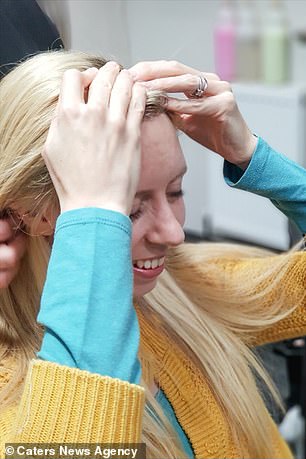 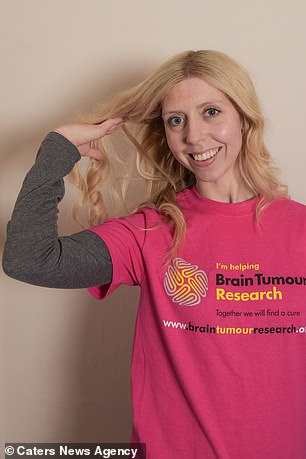 Mrs Smith is pictured left having her hair piece fitted. She goes back every few months while she continues to undergo chemo. Pictured right after, she describes the results as ‘amazing’

‘We want to help families in the future who might find themselves in our position one day,’ she said.

‘We’re going to be vlogging about our experience and doing a series of challenges and events throughout the year with the aim of raising as much money as possible for what has historically been a very neglected cause.’

Hugh Adams, head of PR and media relations, at Brain Tumour Research, said: ‘We are extremely grateful to Katie for her tireless campaigning.

‘Her motivation and courage are so inspiring although, sadly, her story is not unusual.

‘Brain tumours kill more children and adults under the age of 40 than any other cancer yet historically just one per cent of the national spend on cancer research has been allocated to this devastating disease.’

Peter Murtha, CEO and founder of Optima, added: ‘Katie came to see us last summer to see if we could help her get back some confidence after losing her hair due to her brain tumour.

‘After hearing her story we decided to offer the £2,500 hair-system programme completely free-of-charge. We felt Katie was an inspiration and if we could help her feel better about herself then offering our services free was the least we could do.’