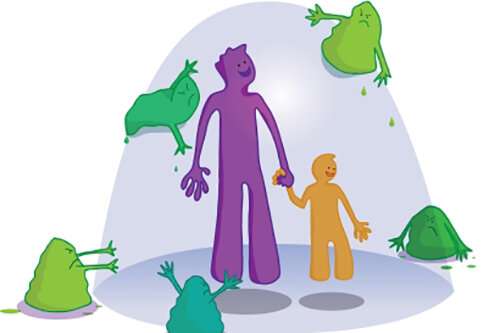 A paper published in the BMJ today argues that since most people with COVID-19 are cared for at home it may be important to try to protect the people caring for them by limiting how much virus they come in contact with the ‘viral load.”

The paper was published by members of a team of health experts at the University of Southampton, University of Bath, University of Bristol and Public Health England and patient representatives who have been funded by a new UK Research and Innovation and National Institute for Health Research (NIHR) grant to provide online advice and support to people in the community on how to protect themselves and their family from infection. The team are making the “Germ Defence’ app freely available.

The BMJ paper looks at evidence from many studies and concludes that exposure to a higher viral load may make people more ill—which is why Personal Protective Equipment is so important in hospitals. It is not practical for people at home to use the same methods that are used to protect hospital workers from infection from patients. But there are many other ways to try to reduce exposure to virus in the home, and they’re explained in GermDefence.org. Once one member of a household has the virus, other household members may become more ill if they do not reduce their level of exposure to the virus within the house. It’s hard for people to remember to look after themselves when they’re caring for sick family members, but it’s especially important, and could save lives.

Public health advice recommends that people with symptoms of COVID-19 should be isolated from other people in the home, but this can be very difficult. Germ Defence supplements public health advice on infection control in the home by using behaviour change techniques to help people put this advice into practice—for example by pre-planning for how to avoid sharing areas of the home if at all possible, changing the home environment to reduce infection levels, personalised goal setting for increasing a range of infection control behaviours; and problem-solving to overcome barriers.

Germ Defence was developed during the H1N1 pandemic using theory, evidence and extensive feedback from members of the public. Germ Defence was then tested among over 20,000 patients, and shown to reduce the number and severity of infections of users and household members—this trial was published in the Lancet.

Germ Defence is still the only digital behavioral infection control intervention worldwide that has been proven to reduce the transmission of infections in the home and has already been translated into over 20 languages so it can be rolled out internationally.

Professor Lucy Yardley, Theme Lead for the NIHR Health Protection Research Unit in Behavioural Science and Evaluation at the University of Bristol, said: “Most people think that if a family member gets ill then it is just a matter of luck whether other people in the household get infected—but our trial of Germ Defence has shown that it is possible to protect the people you live with from also getting ill. We hope the app will save lives by helping people avoid spreading coronavirus to family members.”