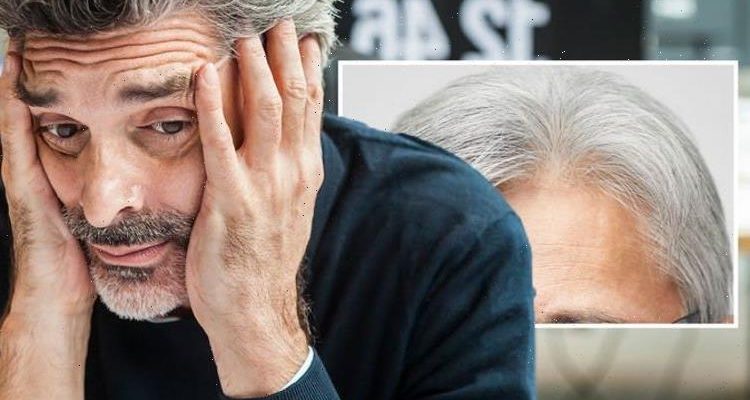 How to reduce the appearance of grey hairs

Grey hair is often met with resignation: a simple reminder that the ageing process is underway. However, it is possible to go grey before your biological clock starts ticking. That’s because stress can be a driver of grey hair.

Speaking to Express.co.uk, Richard Spencer MIT, a Trichologist at the Institute of Trichologists, explained the science behind stress-induced greying.

“New studies show that nervous system affectations such as stress, anxiety, nerves, trauma, shock etc, set off our ‘fight or flight’ responses due to production of cortisol (our stress hormone),” said Mr Spencer.

As he explained, this can in turn cause hair to grey prematurely by affecting the stem cells responsible for hair pigment production.

“The hair is, in-fact, white or near colourless (non-pigmented).”

According to Mr Spencer, the hair only looks grey due to the mixture of darker and white hair.

“Sometimes, but more rarely, the non-pigmented hair can regain its natural colour, post trauma,” he noted.

Of course, premature whitening of hair has other causes.

As Mr Spencer noted, it is also linked to genetics.

He was also quick to debunk a greying myth.

“Going white overnight is an old wives tale as the hair that is already visible on the scalp will not change colour.

“Only the hair still within the hair follicle will be affected.”

Health problems that may be heralded by grey hair include:

According to Harvard Health, genetics is the key driver of grey hair.

“When and how thoroughly your hair turns grey is influenced mostly by the genes you inherit from your parents,” explains the health body.

It continues: “Though stress may play a role in the process, it would be more helpful to look to past generations rather than your current stress levels to help you predict when or if you’ll go grey.

“That’s true whether you’re the President of the United States, or someone with a less stressful job.”

Under healthy ageing conditions, the onset of hair greying in Europeans occurs at the age of 35 years, notes a research article published in the journal BMC Genomics.

The article continues: “While greying observed under the age of 30 years is usually termed as premature hair greying.

“However, the progression of hair greying varies between populations with Africans and Asians showing less grey hair with the onset of hair greying occurring 10 years later when compared to Europeans.”