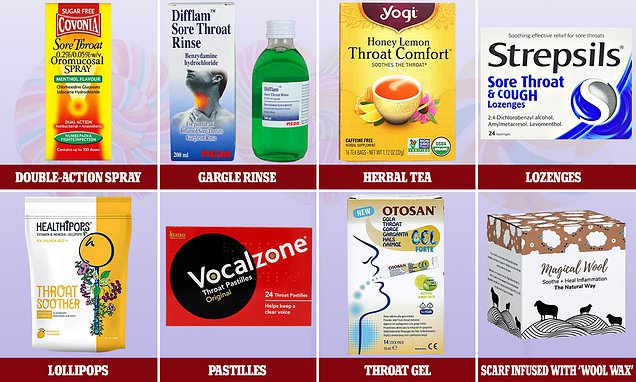 Can a lollipop really ease a sore throat? It’s the season for scratchy throats, and – from gels to pastilles – there are plenty of remedies that claim to help

Sore throats can be caused by a virus (such as cold or flu), streptococcus bacteria (when it’s commonly called strep throat) and even smoking or allergies.

Whatever the cause, there are many over‑the-counter remedies.

Adrian Monti asked the experts to assess a selection, including some old favourites. We then rated them.

Claim: This spray, which comes in lemon and menthol flavours, is said to have a ‘dual-action formula to numb pain and fight infection’, according to the maker.

Its active ingredients are lidocaine hydrochloride, a local anaesthetic, and chlorhexidine gluconate, an antiseptic. Use three to five sprays, six to ten times a day.

Expert verdict: ‘Lidocaine is effective in numbing a sore throat and will provide relief,’ says Ben Merriman, a pharmacist based in Cumbria.

‘If it is caused by a bacterial infection, the chlorhexidine is effective against many bacteria, including the one that causes strep throat.

‘Using a spray means the drugs go straight to the troublesome site, which is good. This is quick-acting and its effect lasts about an hour. The menthol flavour will also separately provide a mild anaesthetic effect and help ease nasal congestion, too, so I’d choose that over the lemon flavour.

‘If you need to use this spray for more than a week, consult your GP as you might require antibiotics.’ 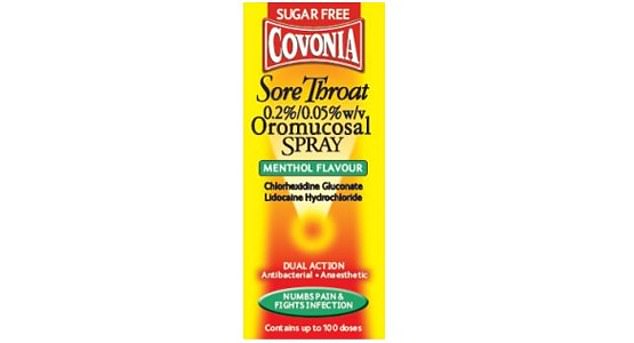 Claim: This rinse is made ‘for painful and inflamed sore throats’ and contains benzydamine hydrochloride, a non-steroidal anti-inflammatory drug, which the maker says relieves pain quickly and works as an anaesthetic. Use the bottle’s cap to measure 15 ml and ‘gargle or rinse’ with the solution.

Expert verdict: ‘This is aimed at any type of sore throat, although it won’t treat a bacterial infection,’ says Thorrun Govind, a pharmacist based in the North-West of England.

‘But it should help reduce the inflammation, swelling and pain caused by any infection because it contains benzydamine hydrochloride. This stops the formation of prostaglandins — compounds released when the body is damaged in some way, and which result in pain, redness and swelling.

‘Note, this contains alcohol which might sting. An alternative home remedy would be gargling with a solution of half a teaspoon of salt dissolved in water.’ 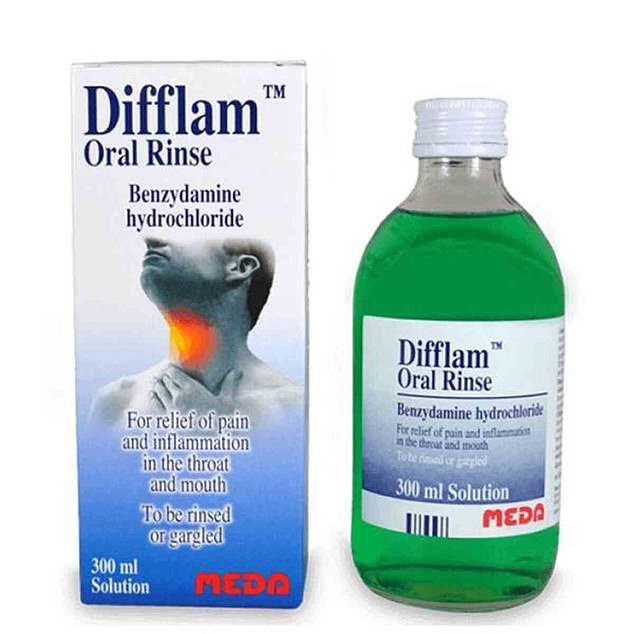 Claim: This caffeine-free tea contains liquorice, wild cherry bark, slippery elm bark, orange peel, organic honey and lemon flavouring. Its maker says sipping it ‘helps to comfort and soothe your throat’ and that the type of tea is ‘caffeine-free and supplies antioxidants’. Drink three to six cups a day.

Expert verdict: ‘Ingredients such as liquorice and slippery elm bark are thought by herbalists to soothe the throat, but there are no clinical studies I’m aware of to support this,’ says Thorrun Govind.

‘This tea claims to contain antioxidants, compounds that fight free radicals in the body which damage cells. But again, there is not enough evidence to support this, or that this would help a sore throat.

‘I certainly recommend drinking hot drinks to stop your throat feeling dry when it is sore. But hot water with a squeeze of lemon would be just as good — and cheaper.’ 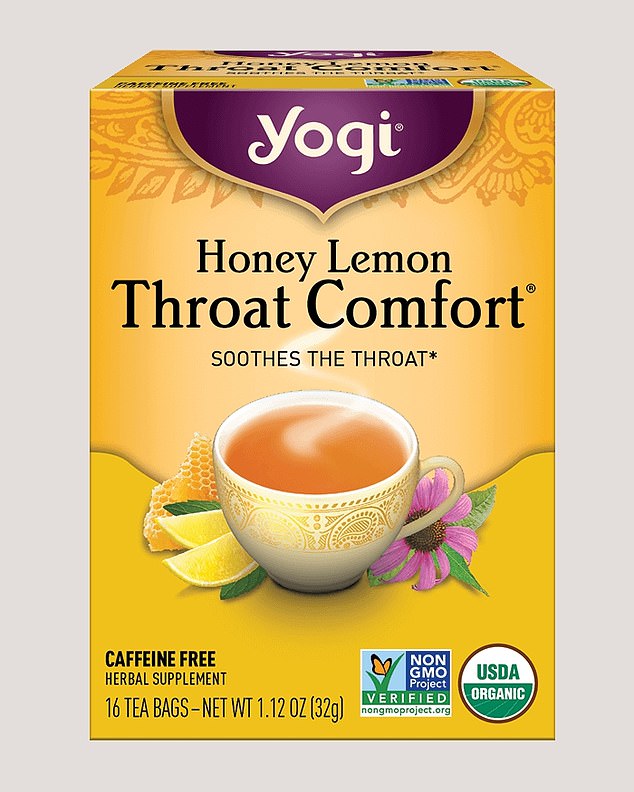 Claim: These lozenges ‘soothe the throat’, ‘fight infection’ and ‘prevent [it] getting worse’, according to the maker. They contain two antiseptic ingredients as well as levomenthol, a mild local anaesthetic. Dissolve one lozenge in the mouth every two to three hours, but don’t exceed 12 lozenges in a day.

Expert verdict: ‘By including two antiseptics which each work differently, these lozenges provide strong antiseptic action, which should work against both viruses and bacteria,’ says Ben Merriman. ‘If one drug doesn’t work, the second may help, increasing the chances of a therapeutic effect.

‘The levomenthol is strong enough slightly to numb the throat. With a lozenge, as it dissolves, saliva will take it around the mouth and down the throat, which has a wider soothing effect. This lasts for about an hour after the lozenge is finished, but as with most remedies, won’t reduce the duration of a sore throat, it just temporarily eases the discomfort.

‘Don’t take excessive amounts of these as they could cause tummy discomfort. If you need more than a dozen in a day, see your pharmacist or GP for advice.’ 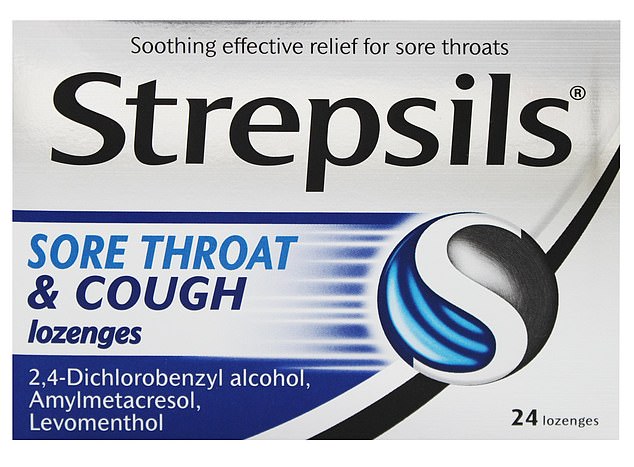 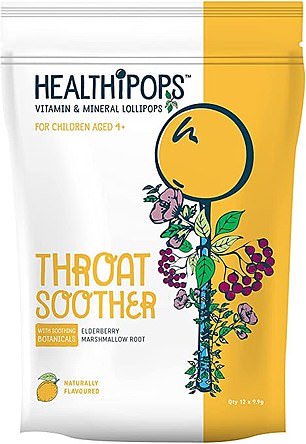 Claim: These lollipops contain ‘naturally soothing botanical extracts’ marshmallow root, and the antioxidant elderberry, plus vitamins A, B6, B12, C, D, and E. Not suitable for children under four.

Expert verdict: ‘Sucking on any boiled sweet soothes a sore throat by stimulating saliva production, because saliva contains compounds called immunoglobulins that fight against pathogens associated with a sore throat,’ says Ben Merriman. ‘Saliva also lubricates the area which eases dryness and also protects the throat when we cough.

‘But I’m not aware of any evidence that these lollipops offer any benefit over and above a packet of barley sugars, for instance.

‘Marshmallow root has been used as a traditional herbal remedy for sore throats, but there is insufficient clinical evidence supporting its use.

‘This also contains lots of vitamins, but these can be gained from a well-balanced diet.

‘Not only do these contain some sugar, but the way that lollipops are eaten can be problematic. They’re sucked slowly, meaning natural bacteria in the mouth are given a prolonged ‘feed’, so the enamel on the teeth can be damaged. I wouldn’t waste my money on these.’

Dissolve one pastille in the mouth, rather than swallowing it; and repeat every two hours if necessary.

Expert verdict: ‘Menthol and peppermint provide a cooling effect, including on the mucous membrane of the mouth and throat,’ says Dr Jeff Foster, a GP in Warwickshire.

‘It doesn’t physically change the temperature, but the menthol activates cold receptors known as TRPM8 on cells, which sends a message to the brain saying this area is cold. There’s also some evidence that menthol provides a local pain-relieving effect and has antibacterial properties.

‘Myrrh is believed to have some antiseptic properties, but there is little good data to confirm this. 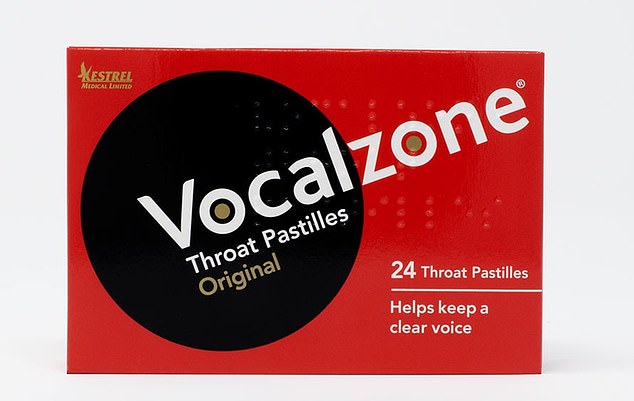 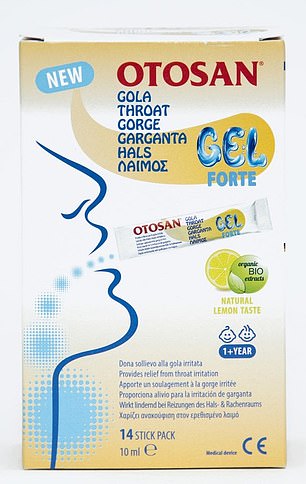 Claim: You pour the contents of one of these 10ml sachets — containing lemon-flavoured gel — down your throat in one go. The ingredients include an Icelandic moss, which the maker says offer a ‘speedy relief from throat irritation’. Take up to three sachets a day.

Expert verdict: ‘The gel’s instructions suggest it helps with the hydration of the mucosa [the moist lining of the throat] and tissue recovery by indirectly reducing irritation of it with a gel ‘film’ that protects it,’ says Thorrun Govind.

‘Although Icelandic moss [or lichen] is used in herbal medicine for treating irritation of the mouth and throat, I’m not aware of good scientific evidence to support these uses.

‘By pouring this gel down your throat, I can’t imagine that it would be in situ for long.

‘With a lack of evidence and its cost, I would consider other options, such as sucking an ice cube or an ice lolly, which will have a cooling, soothing effect on a sore throat.’

Claim: This wool in this scarf comes from sheep in the German and Austrian Alps, whose fleeces contain a high content of a waxy substance called lanolin.

Its maker describes it as a ‘great home remedy’ for ‘a cough, sore throat, pharyngitis or swollen glands’, and says that the wool has natural anti-inflammatory qualities which ‘will reach the affected area through the skin to heal a sore throat from the outside’. Wrap the wool around your neck and secure it in place with a conventional scarf.

Expert verdict: ‘I could not find any studies that link this product to sore throats or that prove it is anti-inflammatory — only ones that suggest lanolin can reduce water loss in skin, so it can help with dry skin and chapped lips,’ says Dr Jeff Foster, a GP in Warwickshire.

‘How this claims to help a sore throat does not make sense physiologically, as there is no evidence to suggest that lanolin is absorbed into anything deeper than the skin layer.

‘Even if it did, if you dissolve anything through the skin, it naturally flows into the bloodstream and doesn’t remain in one place.

‘However, having something warm around your neck such as a scarf improves blood flow, which might make you feel slightly better, but no more than that.’ 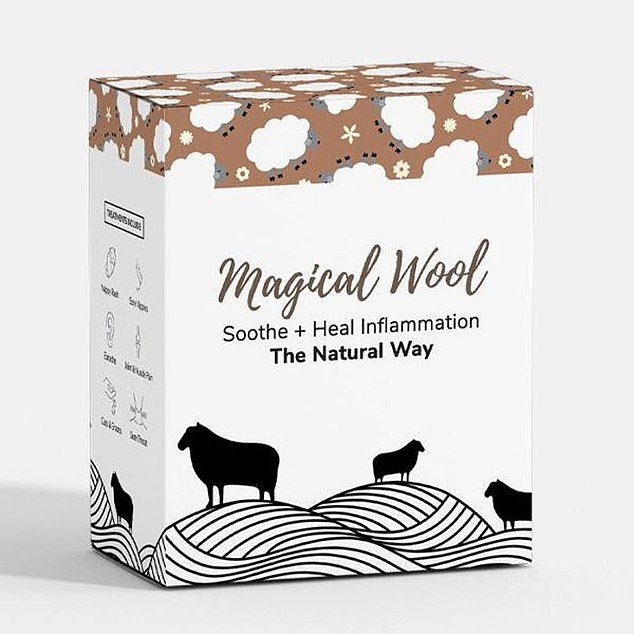