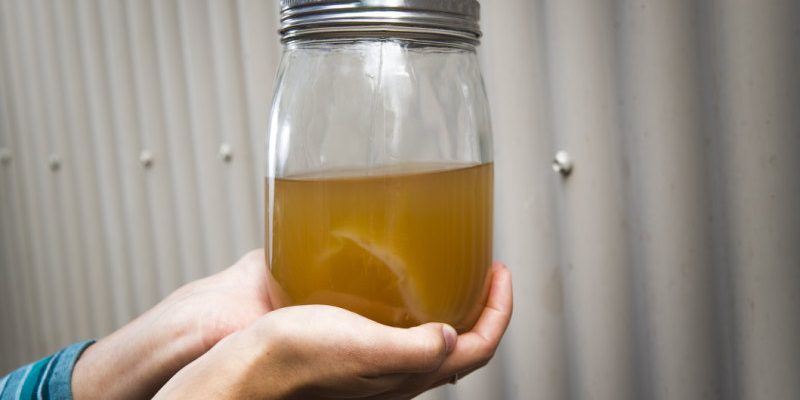 Kombucha is a fermented food, much like cultured yogurt, cheese, kefir, kimchi and sauerkraut. Traditionally a carbonated drink with live micro-organisms, kombucha is made by brewing together sugar, black or green tea, liquid from a previous batch and the Scoby, short for symbiotic culture of bacteria and yeast (though its more popular nickname is "mother", since it reproduces during fermentation).

The "tea of immortality" has come a long way from its reported beginning in China more than 2000 years ago. It has evolved into a $US475 million ($692 million) industry in the United States, nearly quadrupling in the previous four years, according to Nielsen. "Booch," as it's known, flows at megastores, coffeehouses and workplaces; and in bars in a more boozy form, with enough alcohol to rival an IPA. 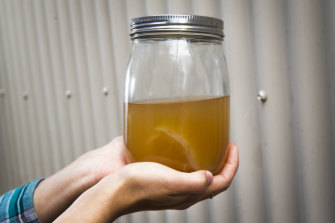 Is there any benefit to drinking kombucha?Credit:Elesa Kurtz

What is kombucha said to do?

"I think there's a 'health halo' around kombucha," said Howard Telford, head of soft drinks research for Euromonitor International, a global market research provider. Advertised as "probiotic", the drink taps into interest in the microbiome, and how our diets can affect the microbial communities in our gut, and even our emotions. Eating foods rich in probiotics is thought by some to increase one's "good" bacteria and balance out the "bad".

Does kombucha do anything?

If only the tea leaves could say. Just one study looked at the health benefits in humans, according to a review of the available literature published in the journal Annals of Epidemiology. Notably, 24 adults with noninsulin dependent diabetes consumed kombucha for three months, and their mean blood sugar levels reportedly stabilised to within normal ranges. But the study was not controlled or randomised, and the authors of the review noted that many of kombucha's claims – like benefits involving rheumatism, gout, hemorrhoids and nervousness – were based on anecdotal and unverified findings.

Cellular or animal research indicates the tea may have anti-inflammatory and antimicrobial properties. Like dark chocolate and olive oil, the tea itself is high in polyphenols, or antioxidants. "The antioxidants that come from the tea on their own have a lot of health benefits," said Rahaf Al Bochi, spokeswoman for the US Academy of Nutrition and Dietetics.

But kombucha is unlike fermented milk products, such as yogurt, which have long been considered to have benefits for digestive and overall health. The bacteria in kombucha have not been confirmed to be probiotic. "We don't know if it does anything," said Franck Carbonero, a microbiome scientist at Washington State University-Spokane, in regards to health benefits. Some kombucha brands add probiotics to their tea.

Does kombucha have alcohol?

Yes, all kombucha drinks contain some ethanol. This varies from beverages with a small amount to those made with a kick: Sales of hard kombucha have spiked 247 per cent in the last year, according to Nielsen. (Hard kombucha doesn't necessarily mean booze was added; producers intentionally ferment the tea longer to increase the alcohol content. Telford, who covers the industry, explained: "All of the retail hard kombucha brands I am aware of produce 'harder' kombucha via a longer fermentation period that utilizes more sugar.")

Most kombucha is marketed as nonalcoholic; in Australia, that means it contains no more than 1.15 per cent alcohol by volume (ABV). Anything more becomes regulated as an alcoholic beverage, like beer or wine. Because of fermentation or the way products are stored, the alcohol content can increase even after they hit the shelves.

"[In the US] there have been many consumer complaints," said Bill Moses, co-founder of KeVita, a kombucha company PepsiCo Inc. acquired in 2016. "Consumers have unwittingly purchased what was represented as a 'nonalcoholic' kombucha that is low in sugar, but found when they consumed it they felt tipsy." Moses now heads Flying Embers, a producer of hard kombucha.

In the last two and a half years, six of the 21 kombucha samples the New York state Department of Agriculture and Markets examined were above the US's 0.5 per cent alcohol by volume threshold, according to the department. Two of those hit 7 per cent. (On average, the ABV for beer is 4.5 per cent.)

Can kombucha harm you?

"Commercial products should be safe," Dr Walton Sumner, a research scholar with the Ronin Institute and a co-author of the review on the available literature, said. "But you probably don't want to use it for all your hydration." He also advises to drink it in moderation.

There are some exclusions: those with kidney or lung disease, who are at risk for acidosis, a condition in which there is too much acid in the blood. In 1995, two Iowa women fell critically ill after drinking homemade kombucha, and one of them died. Also, the Scoby can cause an infection in those who are immunosuppressed.

The sugar content can also be high for those watching their intake. Be aware of the range: from 5 grams a serving (Better Booch's Rose Bliss) to 14 grams (Wonder Drink's Asian Pear & Ginger).

The shifting levels of alcohol in kombucha can pose a problem for pregnant women, children, and individuals with liver disease or pancreatitis or those in recovery.

"Given that alcohol is a substance with well documented harms, the label should feature a clear and prominent indication of alcohol content," Dr Anna Lembke, medical director of addiction medicine at the Stanford University School of Medicine, wrote in an email interview. She pointed out that for those in recovery, even small amounts of alcohol could trigger cravings for more and recommended that those who are sober refrain from the drink.

Given the uncertainty over kombucha's therapeutic effects, Dr David Ludwig, professor of nutrition and pediatrics at Harvard University, said tea drinkers should pause if it's not a flavour they like. "If you're drinking this for health benefits and not enjoying the taste," Ludwig said, "I'd say rethink your drink."

But for those interested in integrating a variety of microbes into their diet, Dr. Emeran Mayer, author of The Mind-Gut Connection, recommends doing so naturally. "I personally drink it occasionally," he said. Instead of using pills or supplements, he said, alternate different fermented foods, including sauerkraut, kimchi, cultured milk products, and, yes, kombucha.