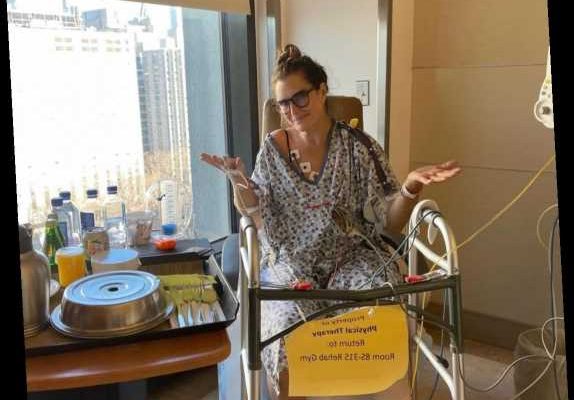 Brooke Shields spent weeks in the hospital having multiple surgeries after breaking her femur, which meant she had plenty of downtime to take photos of the "excruciating" experience.

The 55-year-old actress gave fans a glimpse of her lengthy hospital stay on Instagram, sharing several photos in a "flashback Friday" post about her late-January accident.

"I've come a long way since this, but the journey is just beginning," she captioned the post, which included pictures of her heavily-bandaged arm and right leg, a selfie with multiple chest monitors and a photo of her sitting with a walker while hooked up to medical machines.

Shields broke her right femur at a New York City gym, where she was using a balance board. The Suddenly Susan star suddenly fell of the board, flew in the air and landed heavily on her femur, she told PEOPLE last week. "It felt like it was all in slow motion. And then I just started screaming," she said. "Sounds came out that I've never heard before. The pain was so excruciating."

Shields, who "was so afraid I was paralyzed," was taken by ambulance to the hospital and immediately underwent surgery to place two metal rods near her hip. But she soon needed a second surgery after a broken part of her right femur popped out, and got five more rods and a metal plate to anchor it in place. The Lipstick Jungle star was able to go home after two and a half weeks, but she then developed a severe staph infection and needed to go back for emergency surgery and three blood infusions.

"At first they feared it might be MRSA [a type of bacteria resistant to antibiotics]," she said. "Thank God it wasn't. If it had been, my doctor said it would have been a race against time. That's how you can become septic. It seemed unthinkable."

Now home again, Shields has started grueling physical therapy to help her relearn how to walk.

"For the first time in my entire life, I thought, 'I can't power through this,' " she said of the healing process. "I can't even stand on my leg or go up a step. I need to relearn how to even walk. The feeling of helplessness is shocking."

For more on Brooke Shields' terrifying accident, listen below to the episode of PEOPLE Every Day.

But Shields said that her experience with postpartum depression and her struggles in her career have prepared her for the tough recovery.

"I'm the only one that's going to be able to get through this," she says. "My career has actually been like that as well. One door gets slammed in my face and I search for another. It's not unlike how I felt when I wrote about postpartum depression in 2005. This is my journey, and if it took me breaking the largest bone in my body, then recovery is something I want to share. We have to believe in ourselves and encourage one another. There's no other way to get through life, period."