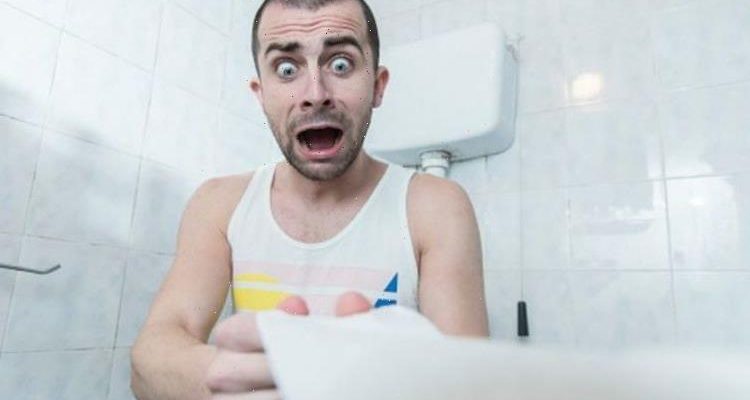 Spotted some blood on the toilet paper after doing a poo? Don’t worry just yet. Bleeding from your bum could be something easily treatable like piles or the side effect of medication. However, it’s important to get the cause diagnosed because it could be a sign of bowel cancer. While one 2009 study found that nearly 20 percent of adults had bleeding from their tail end in the last 12 months, only a third had consulted a doctor. Express.co.uk chatted to Dr Deborah Lee from Dr Fox Online Pharmacy to find out the 11 potential causes of rectal bleeding.

If you’ve noticed blood on the toilet paper or in your poo, there are lots of different reasons why this could be happening.

It can be alarming, especially if the blood is in streaks or in the water as well as on the tissue, but try not to panic.

If the following is true, you shouldn’t self diagnose and should see your GP instead:

Your GP will ask a lot of questions about how long it has been happening, how often it happens and so on.

Dr Lee said: “You must tell them if you have had a change of bowel habit. They will want to examine you.

“This is likely to mean they will examine your back passage but try not to worry about this. For the doctor, it’s all part of a day’s work!

“You may then be asked for a stool specimen to check for the presence of blood and for any infection and a blood test to check for anaemia.”

Depending on the findings, the doctor may refer you to a specialist for more tests.

For example, they may need a stool sample for a Faecal Immunochemical Test (FIT test) to check for colonic cancer.

According to the NHS site, you’ll need to ring 111 immediately if your poo is black or dark red or you have bloody diarrhoea for no obvious reason.

Go to A&E or call 999 if you’re bleeding non-stop or there’s a lot of blood such as large blood clots in the toilet.

At the hospital, Dr Lee said you may be asked to have a sigmoidoscopy, or a colonoscopy, which are tests in which instruments are used to look further up inside your back passage.

If any polyps or growths are seen, a biopsy can be taken and sent to the lab for analysis.

The 11 potential causes of rectal bleeding

Causes of blood mixed in the poo include:

If there is blood on the toilet paper and perhaps in the pan, but not missed in with the stool, this might be due to:

If you notice black blood or tarry stools, this can mean bleeding from higher up in the gut perhaps due to bleeding from a stomach ulcer, or diverticulitis.

The treatment for rectal bleeding or blood in the poo depends on the cause.

If you have gastroenteritis, which is bloody diarrhoea from pathogens such as campylobacter, shigella, or salmonella, this is treated with antibiotics.

However, inflammatory bowel disease such as Crohn’s Disease is treated with anti-inflammatory agents such as steroids, a special diet, and immunosuppressants. Ulcerative colitis is treated similarly. Surgery is sometimes needed.

Haemorrhoids (piles) are lumps that develop around the anus which are often painless or may be itchy and sore.

“They can be injected by sclerotherapy or destroyed using a banding technique.

“Patients must take care to eat plenty of fibre so as not to become constipated, so they do not strain to pass the stool.

“There are a variety of local creams and ointments to soothe piles – speak to your pharmacist.”

If you have colonic cancer (Bowel cancer), the treatment depends on the stage of the disease and how far it has spread.

Dr Lee said: “Surgery is usually required to remove the affected segment of the bowel which sometimes necessitates a colostomy – needing to collect the bowel contents through a hole in the abdomen in a special bag called a stoma bag. Patients also sometimes require chemotherapy and/or radiotherapy.”

If you see blood in your stools, it’s always important to see your doctor and have this checked out.

For the majority of patients, this will be something fairly innocent, but if it is something serious like colon cancer, the sooner this is picked up, the better the prognosis.

Don’t risk it – if you see blood in your stools, in the pan, or on the toilet paper, see your GP.