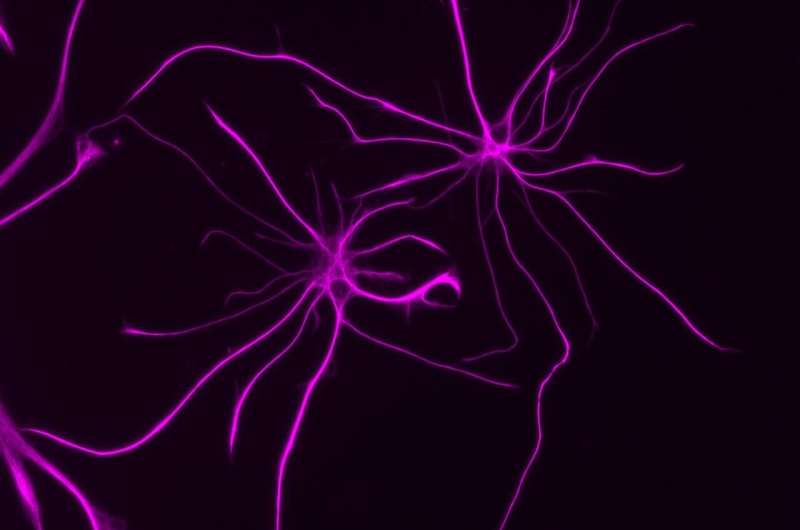 Neurons often get most of the credit for keeping our brains sharp and functioning—as well as most of the blame when it comes to brain diseases. But star-shaped cells called astrocytes, another abundant cell in the human brain, may bear the brunt of the responsibility for exacerbating the symptoms of some neurodevelopmental disorders. Salk Institute scientists have now identified a molecule produced by astrocytes that interferes with normal neuron development in Rett, fragile X and Down syndromes.

As the team reports in Nature Neuroscience on August 30, 2022, blocking the molecule reduces the signs of disease in mice brains.

“These findings are part of a new push to look at how all the cells in the brain, not just neurons, interact in neurodevelopmental disorders,” says Associate Professor Nicola Allen, who led the new study. “This opens the door to potential therapeutics to treat these disorders by targeting astrocytes.”

In recent years, scientists have discovered that astrocytes play key roles in brain development and disease. Isolated neurons, for instance, don’t form connections and communicate unless astrocytes are present. If astrocytes affected by disease are mixed with healthy neurons, the neurons begin showing signs of disease. Similarly, if neurons affected by neurodevelopmental disorders are exposed to healthy astrocytes, their function improves.

However, researchers haven’t been able to pin down what molecules from astrocytes are responsible.

In the new study, Allen and colleagues isolated astrocytes and neurons from the developing brains of mice with genetic mutations causing Rett, fragile X or Down syndrome or from healthy animals. Then they determined the levels of 1,235 different proteins produced by each set of astrocytes. They found hundreds of proteins present at higher or lower levels in each disease, with 120 proteins in common between all three diseases—88 at higher-than-usual levels, and 32 at lower-than-usual levels.

“From a basic science perspective, it’s fascinating that there are so many changes seen in astrocyte protein secretion in these genetic disorders—and more importantly, that so many of those changes overlap between the disorders,” says Alison Caldwell, first author of the paper and a former graduate student in Allen’s lab. “To me, this highlights how important astrocytes are for normal neuronal development.”

One molecule stood out to the scientists. They knew that insulin-like growth factor (IGF) could sometimes reduce symptoms of disease in mice with neurodevelopmental disorders. Researchers had long assumed the treatment worked because diseased neurons weren’t producing enough IGF. But they found a different explanation—astrocytes impacted by Rett, fragile X or Down syndrome make high levels of Igfbp2, a protein that blocks IGF.

“It turns out that neurons are making plenty of IGF, but it can’t get where it needs to be because these molecules made by astrocytes are interfering with it,” says Allen.

“We still have a long way to go to get a therapy based on this to humans, but we think it has promise,” says Allen. “Rather than giving an IGF treatment that has actions throughout the whole body, it makes sense to target Igfbp2 in the brain, where we want IGF to act.”

Allen’s lab group is planning follow-up studies on other proteins they identified in diseased astrocytes, as well as future experiments to better understand Igfbp2.