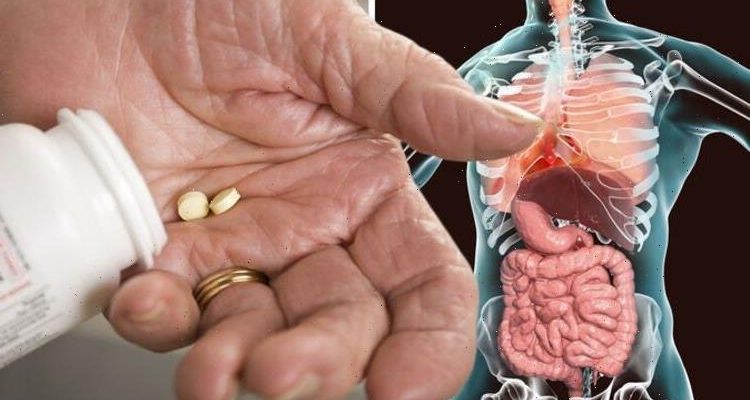 Aspirin is a key player among non-steroidal anti-inflammatory drugs. The painkiller is widely used to reduce moderate pain, but use of aspirin has recently extended to the treatment of chronic conditions too. But chronic use of the pill isn’t without its risks. According to one body of research, the drug could double the risk of upper gastrointestinal even at low doses.

According to WebMD: “Aspirin is used to reduce fever and relieve mild to moderate pain from conditions such as muscle aches, toothaches, common cold and headaches.

“It may also be used to reduce pain and swelling in conditions such as arthritis.”

But the blood-thinner could be recommended for the primary prevention of heart attacks or strokes.

Research last year showed the anti-inflammatory drug could slash the risk of having a first-time heart attack or stroke by 10 percent for individuals aged between 40 and 59.

READ MORE: Dr Chris on why he has taken ‘low-dose’ aspirin daily for years

The drug has a good safety profile, hence its ubiquity.

But according to one body of research, aspirin could almost double the risk for “serious” upper gastrointestinal bleeding in older people.

The researcher told Healio Gastroenterology: “This study confirms that among older adults, low-dose aspirin is associated with an increased risk of gastrointestinal bleeding, with the risk highest among those who smoke and have high blood pressure or kidney disease.”

For their study, researchers looked at data from more than 19,114 patients from Aspree, a trial that assigned 9,525 patients to treatment with aspirin, while 9,589 received a placebo.

The risk of lower gastrointestinal bleeding, on the other hand, was linked to age, smoking and hypertension.

The team found that the absolute, five-year serious bleeding risk was 0.2 recent for individuals, based on the results.

When patients took aspirin, however, the risk surged to 0.4 percent, and 5.5 percent for 80-year-olds on aspirin with significant risk factors.

The study author added: “Because this study was a rigorously performed randomised controlled trial, it provides more accurate estimates of the absolute risk of bleeding among individuals who initiate aspirin at an older age.

“This will be useful for further studies to appropriately weigh the risks and benefits of low-dose aspirin treatment.”

Evidence of bleeding in the upper gastrointestinal tract may be apparent when passing stool.

The excrement may appear black or tarry, but it may also be mixed with dark or bright red blood.

Other warning signs include dizziness, faintness, paleness, and shortness of breath.

Cases of sudden and acute bleeding in the upper gastrointestinal tract is classified as a medical emergency, so receiving medical treatment swiftly is important.

Slower bleeding in this part of the body is equally dangerous, as chronic bleeding can become serious over time.