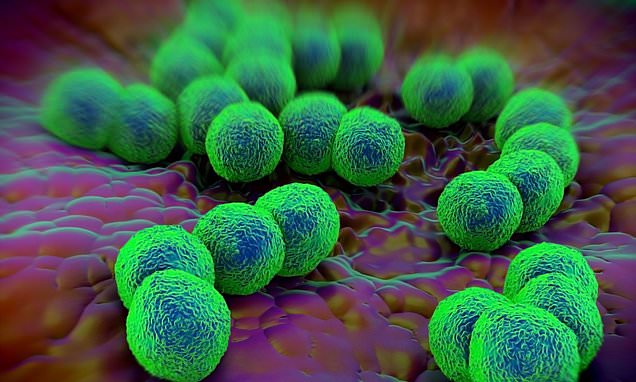 Scientists have made a breakthrough in the fight against superbugs after developing a antibiotic that can kill bacteria before it develops resistance.

Researchers at Princeton University in the US tested a compound, called SCH-79797, against 25 of the most dangerous antibiotic resistant bugs.

It included a ‘super strain’ of gonorrhoea that is considered one of the top five urgent threats to public health because it shrugs off every known antibiotic.

Scientists say the ‘exciting work’ may revolutionise the hunt for a new antibiotic, and say the new compound works like a ‘poison arrow’.

There have been no new classes of antibiotics to treat gram-negative bacteria – the toughest kind – in 30 years, because the medicine has to be strong enough to kill the bacteria without being toxic to humans.

Antibiotic resistance occurs naturally. But the process has been accelerated by doctors unnecessarily doling it out for decades.

Once harmless bacteria have now become superbugs which kill an estimated 700,000 people every year worldwide. 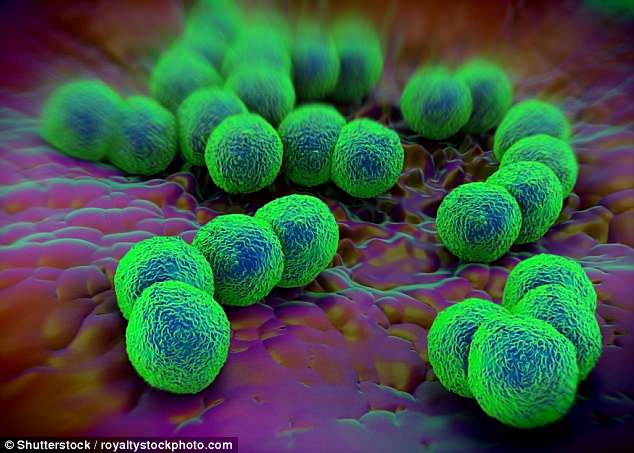 Scientists have made a breakthrough in the fight against superbugs after developing a antibiotic that can kill bacteria before it develops resistance. It worked against a ‘super strain’ of gonorrhoea called Neisseria gonorrhoeae (pictured)

The key difference is that Gram-negative bacteria are armoured with an outer layer that shrugs off most antibiotics – which is a huge concern.

Only six new classes of antibiotics have been approved in the past 20 years, none of which are active against Gram-negative bacteria.

A team of Princeton researchers reported in the journal Cell that they have found a compound that could offer a solution.

‘This is the first antibiotic that can target Gram-positives and Gram-negatives without resistance,’ said Zemer Gitai, professor of biology and senior author on the paper.

‘From a “Why it’s useful” perspective, that’s the crux.’

WHAT IS ANTIBIOTIC RESISTANCE?

Antibiotics have been doled out unnecessarily by GPs and hospital staff for decades, fueling once harmless bacteria to become superbugs.

The World Health Organization (WHO) has previously warned if nothing is done the world is heading for a ‘post-antibiotic’ era.

It claimed common infections, such as chlamydia, will become killers without immediate solutions to the growing crisis.

Bacteria can become drug resistant when people take incorrect doses of antibiotics or if they are given out unnecessarily.

Former chief medical officer Dame Sally Davies claimed in 2016 that the threat of antibiotic resistance is as severe as terrorism.

Figures estimate that superbugs will kill 10 million people each year by 2050, with patients succumbing to once harmless bugs.

Around 700,000 people already die yearly due to drug-resistant infections including tuberculosis (TB), HIV and malaria across the world.

Concerns have repeatedly been raised that medicine will be taken back to the ‘dark ages’ if antibiotics are rendered ineffective in the coming years.

In addition to existing drugs becoming less effective, there have only been one or two new antibiotics developed in the last 30 years.

In September, the WHO warned antibiotics are ‘running out’ as a report found a ‘serious lack’ of new drugs in the development pipeline.

Without antibiotics, C-sections, cancer treatments and hip replacements will become incredibly ‘risky’, it was said at the time.

KC Huang, a professor of bioengineering and of microbiology and immunology at Stanford University, who was not involved in this research, said it could revolutionise antibiotic development.

He said: ‘The thing that can’t be overstated is that antibiotic research has stalled over a period of many decades.

‘It’s rare to find a scientific field which is so well studied and yet so in need of a jolt of new energy.

‘This compound is already so useful by itself, but also, people can start designing new compounds that are inspired by this. That’s what has made this work so exciting.

‘From a societal point of view, it’s fantastic to have new hope for the future.’

Dr James Martin led the latest research into SCH-79797, called SCH for short, having spent most of his career working on the compound.

For 25 days Dr Martin exposed drug resistant bacteria to the compound in the laboratory over and over again, to prove it was in fact killing it.

The team tried it against bacterial species including Neisseria gonorrhoeae, which is on the top five list of urgent threats published by the Center for Disease Control and Prevention.

Gonnorrhoea is an STI – the third most common in Britain – typically treated with ceftriaxone and azithromycin.

A report from Public Health England in January 2019 revealed resistance to these three drugs continues to grow, limiting the options available to treat the disease.

The researchers got a sample of the most resistant strain of N. gonorrhoeae from the vaults of the World Health Organization – a strain that is resistant to every known antibiotic.

‘But what we’re most excited about as scientists is something we’ve discovered about how this antibiotic works.’

Typical antibiotics research involves finding a molecule that can kill bacteria and breeding multiple generations. The bacteria evolves resistance to it, and scientists use this to re-engineer the molecule to fine-tune it.

This wasn’t needed for SCH because it already worked in the first place.

Professor Gitai explained that they re-named the compound ‘Irresistin’, after the word irresistible.

The scientists have spent years trying to work out exactly how the compound works, having seen its potent effects in the lab.

It works with two different mechanisms. It simultaneously punctures the outer layer of the bacteria and then kills the DNA inside.

SCH shreds folate, a fundamental building block of RNA and DNA that is vital to both bacteria and mammals.

‘There’s a whole class of targets that people have largely neglected because they thought, “Oh, I can’t target that, because then I would just kill the human as well”‘, Professor Gitai said.

WHAT IS SUPER GONORRHOEA?

When gonorrhoea is resistant to one of two antibiotics recommended to treat it, it is known as super gonorrhoea.

All types of gonorrhoea – historically called ‘the clap’ – are caused by the bacteria Neisseria gonorrhoeae.

It is quick to develop and strains mutate every few years to become resistant to drugs.

Doctors have frequently changed their recommended treatments to keep up with the changing nature of the bug. It stopped responding to penicillin in the 1980s.

Symptoms of gonorrhoea include discharge, bleeding or pain when urinating.

But around one in two women and one in 10 men will not experience any signs, which is why the infection is so easily spread.

Women who do not get treatment can develop pelvic inflammatory disease – an infection of the womb and ovaries which can cause infertility.

In pregnancy, it can cause miscarriage, premature birth or lead to babies developing problems with their vision.

Patients with super gonorrhoea can be given some other treatments which might work but can have unpleasant side effects.

Health experts warn it is only a matter of time before the bug mutates to resist these remaining antibiotics too. They recommend using condoms and regular testing to prevent spread of the disease.

It wouldn’t be able to be used in a medicine because it runs the risk of killing the patient before it killed the infection.

However, a derivative called Irresistin-16 fixed that. It is nearly 1,000 times more potent against bacteria than human cells, making it a promising antibiotic.

As a final confirmation, the researchers demonstrated that they could use Irresistin-16 to cure mice infected with N. gonorrhoeae.

Professor Gitai said: ‘Gonorrhoea poses a huge problem with respect to multidrug resistance. We’ve run out of drugs for gonorrhoea.

‘The standard strains that are circulating on college campuses are super drug resistant.

‘What used to be the last line of defence, the break-glass-in-case-of-emergency drug for Neisseria, is now the front-line standard of care, and there really is no break-glass backup anymore. That’s why this one is a particularly important and exciting one that we could cure.’

The researchers hope their findings will lead to new antibiotics that can fight against a global health crisis, in which no new medicines have been discovered in decades and antibiotic resistant drugs have risen in prevalence.

The World Health Organization describe antibiotic resistance as one of the biggest threats to global health.

Specialists estimate around 70 per cent of bacteria that can cause infection are already resistant to at least one antibiotic that is commonly used to treat them.

Bacteria are more likely they to become ineffective for treating more serious conditions if antibiotics are used incorrectly or too much.

The overuse of antibiotics in recent years means they’re becoming less effective and has led to the emergence of ‘superbugs’.

The European Center for Disease Prevention and Control (ECDC) estimates 30,000 people in Europe die from superbugs every year.

Figures estimate that, by 2050, 10million people globally will die per year because of infections which have evolved to be untreatable.