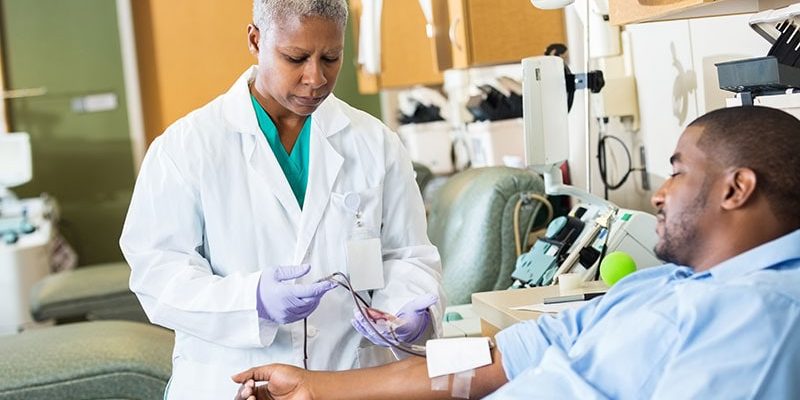 NEW ORLEANS — Save lives, save money. What’s not to love?

That’s the claim made for a proposed national exchange or registry of data on alloantibodies. These are antibodies that develop in response to foreign red blood cells in individuals who undergo repeated blood transfusions, such as patients with sickle cell disease, although they can also occur after pregnancy and transplants.

A central repository of data on alloantibodies would save lives by preventing serious immune reactions among patients with sickle cell disease and other maladies, and would save costs associated with hospitalization for serious and potentially fatal infusion reactions, say the creators of a mathematical model demonstrating the clear value of such a databank.

“The findings from our model are pretty definitive,” said George Goshua, MD, MSc, Yale University School of Medicine in New Haven, Connecticut. “Despite very conservative assumptions, our results still show a huge financial benefit to having a system in place to serve as a preventive net that catches patients before they have to go through a delayed hemolytic transfusion reaction (DHTR).”

Goshua presented the study here at the American Society of Hematology annual meeting.

The proposed registry would significantly reduce the risk that transfusion-dependent patients, and others who require occasional transfusions, would develop complications requiring hospitalization, he said.

A similar registry has been up and running in the Netherlands for 15 years, he said at a press briefing.

Briefing moderator Catherine Bollard, of the Center for Cancer and Immunology at Children’s National Research Institute in Washington, DC, asked Goshua why such an exchange hasn’t been started in the US already.

“I will say first that our European colleagues are far ahead in terms of preventative care,” he replied.

“On top of that, there’s a unique environment in the United States — and this dates back about 15 years now — where we are almost allergic to putting costs on benefits, that is, attaching a cost value to a benefit that a population can gain,” Goshua said. “So in this context, there hasn’t been an analysis that shows that this [exchange] actually makes sense, but I think it’s one of those analyses kind of showing people that the sky is blue but proving it quantitatively.”

Bollard said that the potential beneficial impact of such an exchange “is huge,” but it would “require upfront expenditure to actually realize these massive gains you will get down the road for these patients.”

Although hospitals and transfusion centers check donated blood against an individual patient’s alloantibody profile, that information is usually kept in localized records and is not typically shared across health systems nationwide.

It’s different in the Netherlands, where the Transfusion Register of Irregular Antibodies and Cross-match Problems (TRIX) was launched in 2007. Under this system, transfusion laboratories register the presence of irregular red blood cell alloantibodies for their patients and can consult the database for information that is relevant for pretransfusion testing.

To see whether such a system, if implemented in the United States, would satisfy even the most parsimonious administrator or insurer, Goshua and colleagues created a computer simulation.

They estimated age- and gender-adjusted quality-adjusted life years (QALYs) for patients living with sickle cell disease, who typically require frequent transfusions and are thus especially at risk for developing alloantibodies and immune reactions from repeat exposures to the blood of others.

The model included age- and gender-adjusted costs based on 10 years of claims data, with the assumption that equal numbers of male and females would be in the sample.

The model estimated that by reducing DHTR incidence and DHTR-specific mortality in 20% to 44% of alloimmunized patients (a very conservative estimate, according to Goshua), the existence of a US exchange would result in a gain of between 7140 and 15,710 QALYs.

Assuming a willingness to pay up to $100,000 per QALY, a commonly used threshold in economic analyses in the US, the exchange (vs no exchange) would be preferred in 100% of 10,000 different iterations of a cost-effectiveness acceptability curve, Goshua said.

Even if the lifetime operational costs of such an exchange exceeded $600 million, it would still be cost-effective, and the net monetary benefit to the US economy would be $0.7 billion, the authors found.

And although the model was limited to patients with sickle cell anemia, many other alloimmunized patients would be likely to benefit from such an exchange, including women with a prior pregnancy, and patients with autoimmunity, myelodysplastic syndrome, or beta-thalassemia, Goshua said.

The study was supported by the American Society of Hematology, the Yale School of Medicine, and Yale Center. Goshua and Bollard reported no relevant financial relationships.

Neil Osterweil, an award-winning medical journalist, is a long-standing and frequent contributor to Medscape.