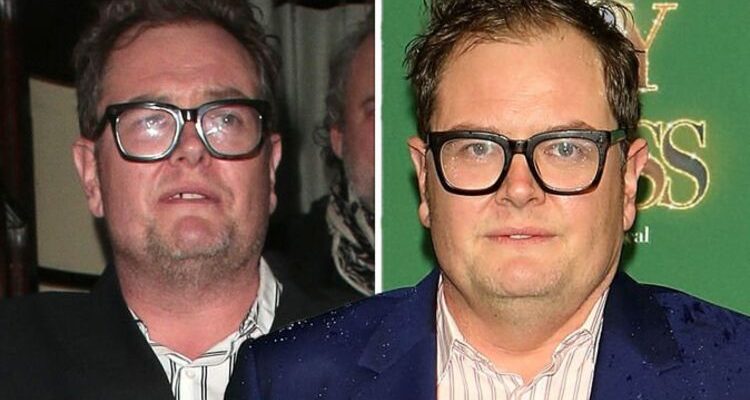 The One Show: Alan Carr talks about marriage breakdown

Speaking publicly about his struggles back in 2016, Carr revealed that the majority of 2015 was spent battling a psychological condition which first started on the opening night of his Yap, Yap, Yap! tour. Remarkably, due to intense nerves and anxiety, Carr imagined that he was suffering from bladder problems. During the middle of the gig Carr had a sensation of wetting himself, although in reality he wasn’t actually doing so. But the sensation was enough to cause him significant mental distress.

“Nothing comes out. In Wolverhampton, I felt a ping and I thought, ‘Oh my God, I’m [bleeping] myself again!’

“I had to run off stage. I thought every laugh that I was getting was because they knew what I’d done.”

In order to try and overcome his mental block, Carr said that throughout the tour he wore multiple pairs of underwear and became conscious of not drinking too much in case his worst nightmare came true.

He continued to say: “I couldn’t move my bottom half, I was paralysed.

“I was going on stage like a lizard. My gums were stuck to my lips. I had to do something, I was becoming a wreck.

“I didn’t drink any liquid all day.”

The star admitted that it wasn’t just on his comedy tour that he has suffered from the mental condition that has turned him into a “wreck”.

On the set of his popular chat show Chatty Man, which ran from 2009 to 2016, Carr said the exact same thing happened.

“Sometimes I’m sitting there on Chatty Man and feel the same. It’s awful. But I didn’t want to have to quit,” he said.

“I’ve always had trouble with anxiety, like with psoriasis and migraines, but it’s just gone up a f**king gear.

“There were times before I went on stage when I was in tears. I have so much sympathy for ­anyone who suffers anxiety attacks and the crippling side-effects.

“Enough is enough, I finally told my private parts.”

In desperate need to try and help his condition, Carr explored various alternative therapies including the Japanese healing therapy of Reiki and even a Ouija board – the latter which unsurprisingly didn’t work.

“I went to see a healer and I said to him: ‘I don’t believe in this shit but I’m losing my hair, I’m crying before I go on stage.’ He then put me under and started to heal me,” Carr explained about the Reiki therapy.

“The only way I can describe it is like my body being plugged into an iPhone charger. Weirdly, the healing happened. I came out and went on stage and it had gone. I had my confidence back. It was a mental thing.”

Reiki is a simple and natural spiritual healing practice found useful in helping any known illness and condition by promoting relaxation and reducing stress. One study published in 2019 showed that Reiki treatment is useful for the following:

Despite these findings Reiki should not be used as a substitute for consultations with a doctor or psychotherapist if individuals are suffering from anxiety or panic attacks. The NHS explains that panic disorder is an anxiety disorder where you regularly have sudden attacks of panic or fear.

A panic attack can be extremely frightening and cause symptoms including:

If you or someone you know is experiencing symptoms of a panic disorder it is recommended you speak to your GP, who will be able to recommend either talking therapies or medicine, which are the main treatments for panic disorder. Treatment will depend on an individual’s symptoms.