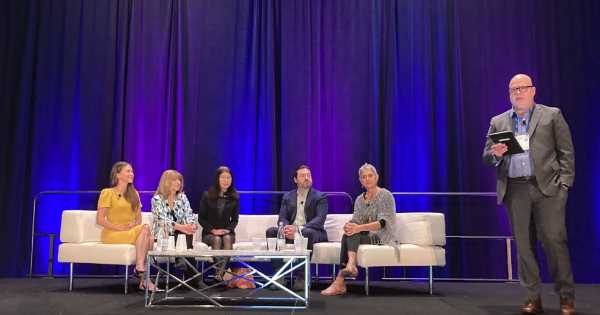 ORLANDO – Studies show that roughly 80% of the data collected in healthcare organizations is unstructured or conversational,  including radiology images, physicians’ notes or even social media posts.

Within that data, said presenters at HIMSS22’s Machine Learning & AI for Healthcare Forum on Monday, lies incredible potential – which ML and AI can play a key role in unlocking.

“We really goofed as an industry, when we did electronic health record implementations a while back, at capturing clinical data in a way that was useful,” he said.

However, he said, this also presents a chance for improvement.

“I think there’s a huge opportunity to leverage natural language processing on the fly as we’re starting to collect this new data, to get to some standards in what we collect,” he said. “For me, one of the most interesting applications of machine learning and artificial intelligence is moving data from unstructured to structured.”

To that end, as panelists noted, it would be challenging – to say the least – to sort through all that potentially actionable data without machine help.

“Our ability to get that information all in one place, and also have it [be] safe and secure, and have it in a way that’s incorruptible – so you can build models on the data or analyze the data without fear of overriding a particular data set – that’s where machine learning and artificial intelligence comes into play,” she said.

“I’m obviously a little biased,” she added. “But once you have all this data, it’s going to become impossible for a single person to run analytics at the scale and speed they need without AI and machine learning technology.”

Those analytics, she explained, can then help to surface trends that may have been buried.

But it goes beyond a broad population health framework. Panelists noted that these kinds of tools could ultimately play a role in individualized patient care.

“A consumer, a member, a patient and a person – they’re all used interchangeably,” pointed out CVS Health principal data scientist Li Qin.

If a patient is going to a CVS Minute Clinic, for example, that could signal that further intervention may be needed down the line.

“I feel like there’s still a long way to go,” she added. “But once we are clear, it may really open a much better space [for] quality of life.” However, she noted, that framework requires privacy and security “as a first order of business.”

With that regard, predicted Embrey, “I think we’re going to see a shift in terms of who ‘owns’ this data.”

“Right now, you could make a pretty strong argument that the hospital system owns it,” she continued. “The patients are increasingly getting access to that data,” or, in the case of wearable technologies, producing it.

Patients, said Kerri Webster, VP and chief analytics officer at Colorado Children’s, will likely become more empowered to say “that’s my data … I own that.”

So how best to incorporate these tools into clinician workflow and maximize their potential for patient outcomes? Well, said Webster, “that’s the million-dollar question.”

“You have to get the trust in the data,” she said. “I think the technology is there … the process is involved in getting the healthcare provider to accept and integrate that.”