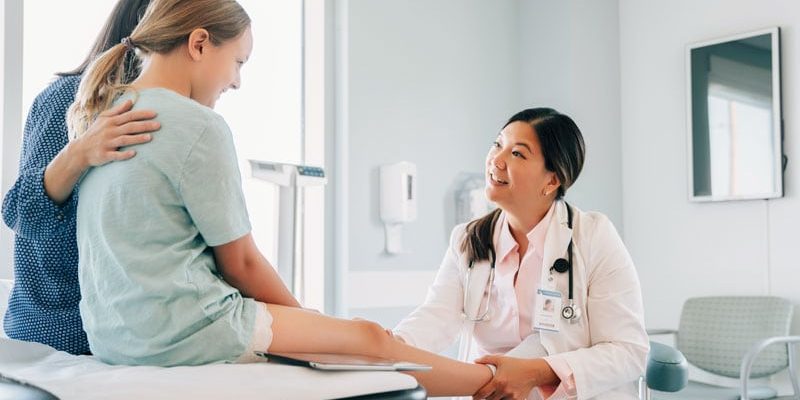 A small cohort study of pediatric rheumatology patients with generalized joint hypermobility (GJH) who presented to a specialized hematology clinic suggests that many such patients have abnormal bleeding symptoms, in comparison with health control patients.

The study of 81 patients with GJH found that about three quarters had significantly elevated median bleeding scores, but only 12% had been assessed for bleeding.

“We propose that screening for bleeding symptoms should be integrated into the routine care for all patients with GJH, with hematology referrals for patients with increased bleeding concerns,” writes a research team led by Nicole E. Kendel, MD, a pediatric hematologist-oncologist at Akron Children’s Hospital in Ohio, in a study published online in Arthritis Care and Research.

“Further studies are needed to understand the mechanism of bleeding, evaluate comorbidities associated with these bleeding symptoms, and potentially allow for tailored pharmacologic therapy,” the authors state.

Kendel’s team had reported moderate menstruation-associated limitations in school, social, and physical activities among female adolescents with GJH. “This cohort also experienced nonreproductive bleeding symptoms and demonstrated minimal hemostatic laboratory abnormalities, indicating that this population may be underdiagnosed and subsequently poorly managed,” she told Medscape Medical News in an interview. “As excessive bleeding symptoms could have a significant impact on overall health and quality of life, we thought it was important to define the incidence and natural course of bleeding symptoms in a more generalized subset of this population.”

Although the investigators hypothesized that there would be a statistically significant increase in bleeding scores, “we were still impressed by the frequency of abnormal scores, particularly when looking at the low percentage of patients [12%] who had previously been referred to hematology,” she said.

The median age of the study cohort was 13 years (interquartile range, 10–16 years), and 72.8% were female. The mean Beighton score, which measures joint flexibility, was 6.2 (range, 4–9). All participants were seen by rheumatologists and were diagnosed for conditions on the hypermobility spectrum. Those conditions ranged from GJH to hypermobile Ehlers-Danlos syndrome (hEDS).

Abnormal bleeding, as measured by the International Society on Thrombosis and Haemostasis Bleeding Assessment Tool, was found in 75% (95% CI, 64% to 84%). Overall mean and median bleeding scores were 5.2 and 4, respectively; scores ranged from 0–16. Abnormal scores of ≥3 were observed for patients <8 years of age, ≥4 for men ≥18 years of age, and ≥6 for women ≥18 years of age. These measures were significantly elevated compared with those reported for historical healthy pediatric control persons (P < .001).

The most common hemorrhagic symptom was oral bleeding (74.1%) that occurred with tooth brushing, flossing, tooth loss, or eruption. Others reported easy bruising (59.3%) and bleeding from minor wounds (42%). In terms of procedures, tooth extraction requiring additional packing was reported by 25.9%, and 22.2% reported significant bleeding after otolaryngologic procedures, such as tonsillectomy/adenoidectomy, septoplasty, and nasal turbinate reduction.

Prolonged or heavy menstrual periods were reported by 37.3% of female patients.

Interestingly, bleeding scores did not differ by biological sex or NSAID use, nor did any correlation emerge between patients’ bleeding and Beighton scores. However, there was a positive correlation with increasing age, a phenomenon observed with other bleeding disorders and in the healthy population, the authors note.

Of the 10 study participants who had previously undergone hematologic assessment, one had been diagnosed with acquired, heart disease–related von Willebrand disease, and another with mild bleeding disorder.

Severe connective tissue disorders are associated with increased bleeding symptoms in the adult population, Kendel said, but few studies have assessed bleeding across the GJH spectrum, particularly in children.

Bleeding is thought to be due to modifications of collagen in the blood vessels. “These modifications create mechanical weakness of the vessel wall, as well as defective subendothelial connective tissue supporting those blood vessels,” Kendel explained. She noted that altered collagen creates defective interactions between collagen and other coagulation factors.

“Even in the presence of a normal laboratory evaluation, GJH can lead to symptoms consistent with a mild bleeding disorder,” she continued. “These symptoms are both preventable and treatable. I’m hopeful more centers will start routinely evaluating for increased bleeding symptoms, with referral to hematology for those with increased bleeding concerns.”

Commenting on the study’s recommendation, Beth S. Gottlieb, MD, chief of the Division of Pediatric Rheumatology at Northwell Health in New Hyde Park, New York, who was not involved in the investigation, said a brief questionnaire on bleeding risk is a reasonable addition to a rheumatology office visit.

“Joint hypermobility is very common, but not all affected children meet the criteria for the hypermobile form of hEDS,” she told Medscape Medical News. “Screening for bleeding tendency is often done as routine medical history questions. Once a child is identified as hypermobile, these screening questions are usually asked, but utilizing one of the formal bleeding risk questionnaires is not currently routine.”

According to Gottlieb, it remains unclear whether screening would have a significant impact on children who have been diagnosed with hypermobility. “Most of these children are young and may not yet have a significant history for bleeding tendency,” she said. “Education of families is always important, and it will be essential to educate without adding unnecessary stress. Screening guidelines may be an important tool that is easy to incorporate into routine clinical practice.”

The study was limited by selection bias, as patients had all been referred to a specialized hematology clinic.

The study was supported by the Clinical and Translational Intramural Funding Program of the Abigail Wexner Research Institute. The authors and Gottlieb have disclosed no relevant financial relationships.

Diana Swift is a freelance medical journalist based in Toronto.