• Unhealthy eating habits in his thirties caught up to Glenn Almond-Smith, leaving him with a “skinny-fat” body type.
• After hiring a personal trainer, Almond-Smith also revamped his diet and exercise routine and started doing two-a-day workouts.
• In just six weeks, his bodyfat dropped from 14 to 8.7 percent, while he reported a noticeable improvement in his mood, energy level, and confidence.

If you spotted Glenn Almond-Smith on the street a few months ago, you’d never have suspected that he had a weight problem. That’s because Almond-Smith, 37, a clinical vascular scientist from Manchester, England, was already a skinny-looking guy. But on his slender frame, he had very little muscle tone, which was affecting his self-confidence.

“I’ve always struggled to gain muscle and would classify myself as skinny-fat,” Almond-Smith says. “I’d fallen into a routine of bad eating habits throughout my thirties, eating lots of takeout food, chocolate, and red wine.” Almond-Smith says he’d always desired the kind of classic, broad physique he’d see in men’s magazines, but most of the weight he gained tended to accumulate around his stomach.

“I suffered with periods of low self-esteem and episodes of anxiety through my twenties and thirties, which would often have an impact on my motivation to set foot inside a gym,” he says. His turning point arrived during a vacation with friends in Ibiza. As most of them were relaxing and soaking up the sun, Almond-Smith found himself feeling more bashful about revealing his body. “The idea of being on holiday and not wanting to take my top off in front of all my friends made me realize that I had to make a change,” he says.

Knowing he couldn’t do it alone, he sought out the help of a trainer from UK-based gym chain Ultimate Performance. The first step: Overhauling his eating habits. Rather than reduce his calorie intake, however, Almond-Smith was told to ensure he was eating enough protein with each meal. That meant spreading his protein intake across four meals per day—about 40 grams each. While it wasn’t always easy, Almond-Smith got creative, looking for ways to introduce as many high-fat protein sources as he could, such as mackerel, which became a normal part of his breakfast.

“It was actually easier to swallow than it sounds,” he says. “Having a personalized diet plan meant I had to experiment with new foods and it wasn’t as difficult as I first thought.” The other major diet change? Cutting out all alcohol. “Being anxious in social situations, I would often rely on alcohol to help me relax. So being asked to cut alcohol from my diet was also a huge challenge,” he says. “With a university reunion and two weddings on the horizon, I wasn’t too confident it was something I could totally exclude from my diet. But when my trainer asked me, ‘How dedicated are you?’ I knew this was a challenge I was willing to conquer.” 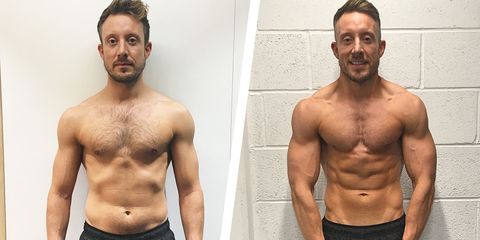 Beyond his diet, Almond-Smith also revamped his workout routine. Because he wanted results in a short amount of time, he started pulling two-a-days on Monday, Tuesday, and Wednesday. In the morning, he did heavy weight work with his trainer and in the evening he targeted the same muscle groups with lighter movements. He paired that with high intensity cardio workout classes, and then he rested on Sundays.

In just six weeks, that hard work paid off: Almond-Smith watched his body fat percentage fall from 14 percent to a super-lean 8.7 percent. “After the first three weeks, my [stomach] was reducing and my abs were becoming more defined,” he says. “I was feeling physically stronger and my clothes were looking better, with a leaner but more muscular frame.” Almond-Smith says that gave him even more motivation to keep going. “By the end, I felt strong, muscular, and full of confidence. The feeling I’d achieved both physically and mentally was euphoric.”

For those trying to mimic his results, Almond-Smith says it’s vital to set a target and get whatever support you can. “Keep your goal in sight and give yourself small targets along the way,” he says. “Log everything to help keep you on track, including food, steps, daily weight. Some days will be easier than others, too, so don’t be too hard on yourself.”