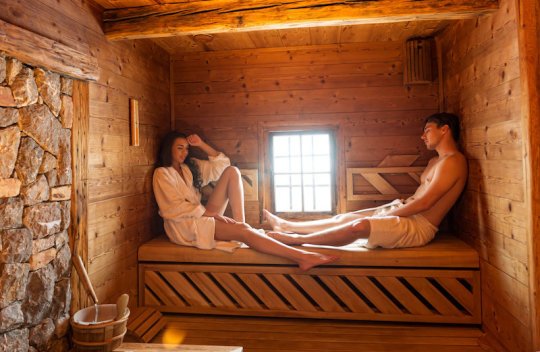 Your blood pressure does not drop during a sauna visit — it rises, as well as your heart rate. This increase is even comparable to the effect of a short, moderate workout. This is the result of a new study conducted by researchers at Martin Luther University Halle-Wittenberg (MLU) and the Medical Center Berlin (MCB). For their study, the researchers placed their participants both in a sauna and on a bicycle ergometer.

Contrary to the previous assumption, blood pressure does not drop during a sauna session — it rises. And this increase is even comparable to the increase caused by a short, moderate workout. This is one of the conclusions of a recent study carried out by sports scientists at the Martin Luther University Halle-Wittenberg (MLU) in collaboration with the Medical Center Berlin (MCB). On separate days, the participants were sent to a sauna and placed on a bicycle ergometer. In addition to higher blood pressure levels, an increase in heart rate was measured both during the sauna visit and during exercise. The study was recently published in the international journal Complementary Therapies in Medicine.

It is generally assumed that a sauna visit leads to a continuous fall in blood pressure. “It was thought that the heat dilates the blood vessels and that this lowers the blood pressure,” says Dr Sascha Ketelhut, lead author of the new study and a sports scientist at MLU. People with low blood pressure or cardiovascular disorders have traditionally been advised not to use saunas, as a further fall in blood pressure can lead to fainting. “However, it is important to distinguish between the acute effects of a sauna session and the effects that were noted during the rest period after the sauna session. Many previous assumptions have been made about the acute effects of sauna use, but so far little research has been done,” continues Ketelhut.

In the second part of the study the participants completed a short exercise program on an exercise bike while also having their blood pressure and heart rate assessed. “Comparing the two conditions, the participants’ blood pressure and heart rate reached the same levels during the sauna session as they did with a load of about 100 watts during the exercise test,” says Ketelhut. This shows that a sauna session is kind of a burden on the body. Still, even people with low blood pressure may occasionally have a shvitz, as Ketelhut says: “Saunas can actually be used by anyone who can tolerate moderate physical stress without discomfort. However, people with low blood pressure should be cautious afterwards, as their blood pressure may then fall below the levels registered before the sauna visit.”

The observations made by the researchers are supported by previous studies that focused primarily on the long-term effects of sauna use, demonstrating positive effects on the cardiovascular system, for example. “A sauna session is a physical strain. Its long-term positive effects are similar to sports activities,” explains Ketelhut. Nevertheless, the healthy sweating does not contribute to weight loss: “The effect is too low as there is no muscle activity. Although we lose weight in the sauna, but these are just the fluids that we sweat out. One should rehydrate after a sauna session, though,” concludes Ketelhut.