• Running, spin, and high-intensity-interval training led to rapid weight loss for Kai Barlow, but as a result, he also lost muscle mass.
• After committing to gaining muscle, he changed his workout plan to include simple movements like pullups, deadlifts, squats, and bench presses.
• His new workout plan succeeded in helping him transform his body, leading to packing on nearly 20 pounds of muscle.

A bad breakup had left Kai Barlow struggling with anxiety and depression. His sleep and diet went out the window; some days he had to work to find the motivation to get out of bed. The 22-year-old bartender from London, a recently graduated sports science student, found that exercising lifted his spirits—even if only temporarily. “I realized that when I exercised, it took my mind off all the bad things going on in my life,” he says. “Even if it took my mind off for maybe even a split second, it was still better than nothing.”

Barlow started experimenting with all kinds of workouts: yoga, spin, HIIT, distance running, and resistance training. His mental health issues had severely disrupted his sleep and eating routines, and most of his exercise came from running. Those combined factors led to him losing more than 25 pounds in about six weeks. His body fat percentage dropped, but so did his muscle mass. When he returned to school, he resolved to pack on more muscle.

Barlow began hitting the gym five or six days a week, with full-body workouts as he began to understand how his body responded to exercise. As he built his confidence, he moved into strength training. Eventually he split his workouts into back, chest, legs, shoulders, with two days of cardio or HIIT a week. “I just tried to prioritize the seven main movements: pullups, dips, rows, military presses, deadlifts, squats, and bench press,” he says. “In the morning before breakfast I would also do a quick 10 minute routine involving pushups, handstand push-ups, and resistance-band shoulder exercises.” 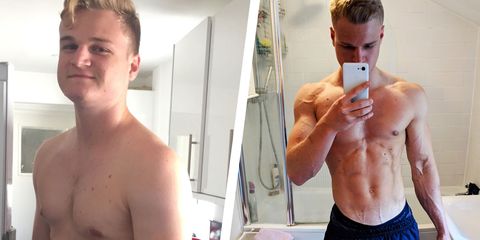 As for diet, Barlow initially just tried to eat healthier food. “Bear in mind that I was still finding it hard to eat and sleep,” he says, “which meant I was probably under eating.” Workouts helped build his appetite, and he started counting his calories with a food scale and an app called Nutracheck, similar to Myfitnesspal. He also stopped drinking—as much for dietary reasons as because it worsened his mental health. “As soon as I implemented my diet,” he says, “everything fell into place and I became extremely lean. I remember each week I would discover a new vein somewhere on my arms!”

As a long-time gym-goer and sports science student, Barlow had the experience and knowledge to make quick gains. In about six months, he gained more than 17 pounds while dramatically increasing his lifts and hitting 11 percent body fat. Still, he often found it hard to push himself out of bed. “I tried everything,” he says, “but what worked the most for me was cold showers and motivational videos on YouTube.” Cold showers reinvigorated his body, while motivational videos re-invigorated his mind.

To anybody going through similar straits, Barlow says: “Hang in there.” It’s not always going to be easy, he says, “But each of those little steps turn into huge marginal gains in the long run.”