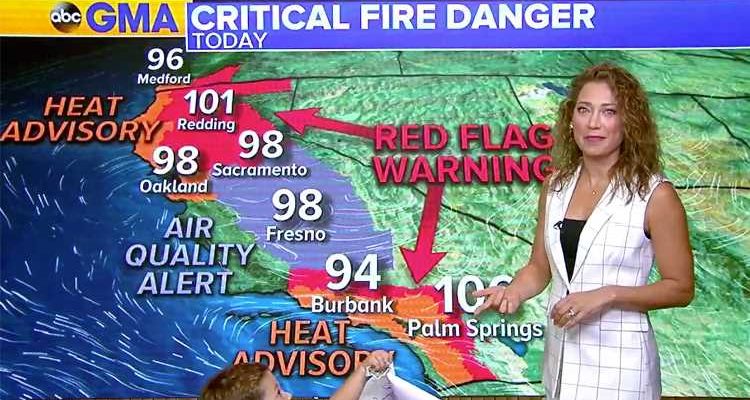 The ABC News chief meteorologist was visited by an unexpected (yet adorable) guest during her Monday weather report on Good Morning America: her 2½-year-old son, Miles Macklin.

While his mama was busy addressing fire dangers in California, little Miles toddled into the frame and handed Zee, 39, a few papers that appeared to have drawings on them.

"This hasn't happened in a long time — apologies! No school today," Zee told her viewers with a laugh while gently accepting the papers from her son, who exited the frame as Zee expertly transitioned back into her report.

"[In] hindsight, I should have pretended it was a breaking news bulletin 😂😂😂that would have been perfect ❤️," she tweeted later of the unforgettable moment.

Zee has been keeping her social media followers in the loop about her life at home as of late with Miles and the rest of her immediate family: husband Ben Aaron and their older son Adrian Benjamin, 4½.

Last week, the mother of two posted a sweet snapshot of Adrian seated at a kids' table, papers scattered over the surface and a bookshelf next to him.

"He got up early and snuck down to join me in his home office so he could 'get some work done before school,' " she wrote in the caption. "My heart explodes every time I see him, especially when he shows up before I even start my promos before GMA. Sweet boy."

Alongside a family photo gallery from the great outdoors this past weekend, she joked, "Super Sunday exploring in the woods 💜 my favorite — @benaarontv 's nightmare🤣"

Zee has been candid over the years about the ups and downs of motherhood and more, including her past battles with depression and anorexia.

Last fall, the meteorologist addressed speculation over whether she was pregnant on social media, shutting down a user who tweeted at her, "Did you announce another pregnancy and I missed it. Gold dress shows it. Congrats."

"Yes! I'm due in a month!!! So glad you asked," Zee replied sarcastically, before going on to say she was "just kidding" and not expecting again.