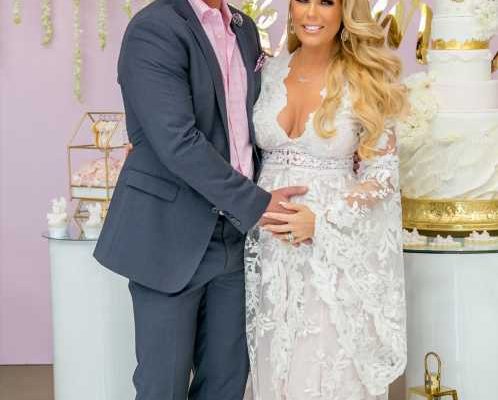 Skylar Gray has entered the building!

“Skylar is born and mama and baby are doing well,” Rossi’s rep shares.

Rossi, 41, and Smiley first revealed her pregnancy on The Doctors in December, which they achieved after a vasectomy reversal on Smiley’s part and multiple rounds of in vitro fertilization (IVF). It has been a long road to motherhood for the former Bravo personality and Smiley, who will celebrated 10 years together this past February.

“We knew that we had to go through IVF in order to get pregnant,” Rossi previously told PEOPLE. “We went through a round of IVF and in that round we had 14 embryos that came out of that. We were so excited and just beyond ecstatic about the results.”

But about six hours before they were going to do the embryo transfer, the pair received a phone call from the doctor “saying that all of the embryos had arrested and basically died.”

“We were just beyond devastated. I couldn’t even get out of bed because you just go from such a high thinking within the next 24 hours you were going to be pregnant to losing everything and losing 14 embryos. That was really, really hard for me and Slade to come out of that,” Rossi admitted.

But the couple kept pushing forward — and it paid off. As the then-mom-to-be told PEOPLE, “There’s been a roller coaster of emotions through this and I don’t want to pretend, especially for all the couples out there going through this, it’s not an easy journey — it really is not. Yes, we have definitely grown through this, thank goodness.”

Rossi and Smiley, 50, revealed the sex of their baby in February at an extravagant bash held in Laguna Hills, California. Guests were greeted by extravagant decorations including tons of floral arrangements and pink and blue balloons, enjoying a variety of on-theme desserts and plenty of champagne.

After mingling with guests and enjoying refreshments, Rossi (wearing a pink-and-blue dress) and Smiley, sporting a pink shirt under a gray jacket, stood in front of a sign reading “[Twinkle, Twinkle] Little Star, How We Wonder What You Are” for the big reveal, where the couple pulled on their cannons to reveal clouds of pink smoke and confetti.

The former reality star opened up about her daughter’s name in April, telling Access Hollywood that she has had Skylar first picked out since she was little and that her middle name, Gray, was chosen in honor of Smiley’s teenage son, who has brain cancer: “He has been this angel on Earth, and he is this unbreakable, amazing little man.”

The engaged couple were the guests of honor at a baby shower in May, held in Laguna Beach, California, at event space Seven 7 Seven, which was decked to the nines.

Both appeared happy as could be at the event, smiling in photos shared across social media by their vendors and guests — including Real Housewives of Dallas star D’Andra Simmons, Vanderpump Rules star Scheana Shay and a slew of Bravo alums like Phaedra Parks (Real Housewives of Atlanta), Patti Stanger (The Millionaire Matchmaker) and Rossi’s former RHOC costars Lizzie Rovsek and Peggy Tanous.

Among the gourmet spread was a huge variety of desserts — the centerpiece of which was a six-tier wedding-style cake in shades of pale pink and white, with a gold-detailed crown on top. But, as Rossi teased the crowd, even though there was an ordained pastor at the event, she and Smiley would not be turning it into a wedding.

“We’re not getting married, I hate to burst your bubble,” she said. “Yes, my dress is white. And we thought about it for a very small second and then I thought, ‘Wouldn’t it be fun to have another big party?’ “

Rossi revealed to fans on Tuesday that she would be going in for a scheduled cesarean section the next day, explaining that after a “really really tough day” following a Monday doctor’s appointment, she, Smiley and her doctors made the “super hard decision” that having a C-section would be “safest” for both her and the baby.

“Doctor said I am only dilated 1cm and I guess I have a ‘cervix of steel’ 😜 so it’s not really cooperating at this point and just my pelvic exam yesterday was so beyond painful that I almost passed out, then started to hyperventilate because of that, which then lead to a panic attack! Needless to say I was a hot mess!” she wrote.

The then-mom-to-be said that ultimately, a C-section will be “a lot less stress on myself and the baby” — but that doesn’t mean that the change of plans has been easy for her.

“When you have this vision of how you want your labor and delivery to go and it doesn’t turn out [the] way you imagined, there is this sadness and internal struggle with ‘why isn’t my body cooperating’ or am I making the right decision etc,” she said.