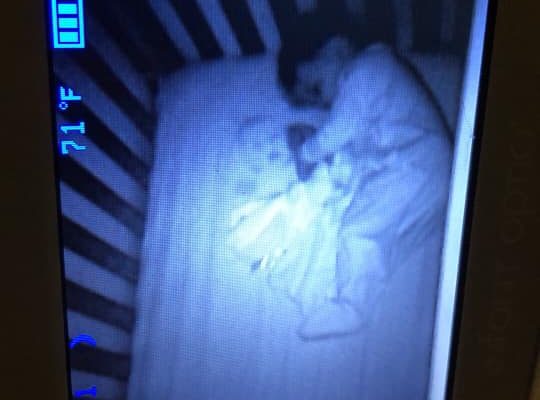 Maritza Cibuls was horrified when she checked the baby monitor after putting her 18-month-old son to bed and noticed what looked like another infant in the crib with him.

“At first I thought my eyes were playing tricks on me,” the Chicago mother, 32, told Today on Tuesday. “I tried to ignore it, but it was really starting to creep me out.”

Cibuls was home alone last Thursday night —  taking care of her son, Lincoln, and 2-year-old daughter Avery — when the spooky incident took place while her husband, Corey, worked late. In her panic, the worried mom said she sent photos of what she was seeing via the baby monitor to friends and family, hoping they could calm her fears of a possible ghost nestled next to her son.

“Even though the first thought that popped into my brain was ‘ghost,’ the rational part of my brain told me there must be some logical explanation,” Cibuls told Today, mentioning that she also consulted a parents group on Facebook following the scare.

Careful not to wake her fast-asleep infant, Cibuls said she checked on Lincoln’s crib throughout the night, looking for any sort of movement from the ghost baby.

“So I grabbed my flashlight and went to check it out, but there was nothing there. All night, I stared at his monitor just waiting to see if the ghost moved, but, of course, it never did,” she told Today.

Cibuls continued: “And every time I started feeling myself relax and get drowsy, my son would roll over and I’d be on high-alert again. I probably checked on him three more times that night, but each time he seemed completely fine.”

When the mother of two’s husband returned home, the parents solved the ghostly mystery. When Lincoln’s father changed the crib’s sheets, he failed to remember to put the mattress protector on top of the bed, allowing a large sticker to peer through the thin covers — a label that included a large image of a baby.

The next morning, Cibuls shared the story on Facebook, seeing the comical side now knowing there was no paranormal entity present.

“So last night I was positive there was a ghost baby in the bed with my son. I was so freaked out, I barely slept. I even tried creeping in there with a flashlight while my son was sleeping. Well, this morning I go to investigate a bit further. It turns out my husband just forgot to put the mattress protector on when he changed the sheets 😂😂 I could kill him,” she wrote.

Cibuls told Today she was “so embarrassed” by the sleepless night, and that she has since taken over on all sheet-changing responsibilities from her husband.