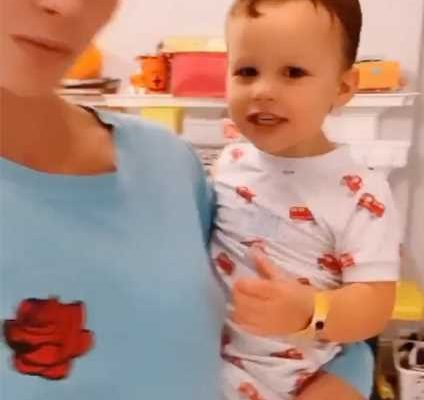 Meghan King has called in some medical reinforcements in the name of her son's dental health.

On Wednesday, the former Real Housewives of Orange County star revealed that she had an "anti-thumb-sucking apparatus" placed on the hand of 2-year-old Hart, in an effort to get him to stop the behavior because it was adversely affecting the roof of his mouth and his teeth.

"Okay, Hart, show everybody what you have on your hand. Show 'em your hand — what's on it?" King, 36, asks her son in an Instagram Story video where the clear apparatus was visible on his left hand.

After he says, "I don't know," the Bravo alum tells him, "It's supposed to make you stop sucking your thumb. … Can you try to suck your thumb with that thing on? Let's see if it works."

When Hart says no, King tells the camera, "Okay, it's working so far! We shall see." Meghan King Edmonds Says Sons' Circumcision Was "Hard" for Her, Wonders If It Makes Men "Aggressive"

In a series of follow-up clips, King tells her followers she "decided to implement that anti-thumb-sucking thing because Hart's palate is starting to get messed up."

"He must suck his thumb really hard because [Hart's twin brother] Hayes sucks his thumb as well, but it hasn't changed his teeth or his palate or anything like that," the mother of three says. "Hart's is kind of raised and his teeth are crowded because when he pushes up on the palate, it narrows his jaw up here or whatever and his teeth are getting crowded, so we gotta cut that out."

Hart's thumb-sucking challenges come two weeks after his mama revealed in a blog post in honor of World Cerebral Palsy Day that he had been diagnosed with hypotonic cerebral palsy.

"I was expecting this diagnosis," King wrote of her son with estranged husband Jim Edmonds. "Even though he's the same kid I expected it to hit me hard. But it didn't. It didn't hit me hard at all. In fact I felt relieved."

I feel like once the twins turned 2 my life got even more magical 💫The twins became easier, all three started playing together, and schedules could be more laid back. I guess age 2 unlocked the “fun box!” What age do you think is a game changer for being able to do fun activities the whole family can enjoy?

The former reality star asked her readers to think of her relief as having felt like she was "going through life every day without putting the lid on the toothpaste and then finally, I got to put the lid on. That's how simple and right it felt."

"This is the once dreadful diagnosis I knew was coming since that fateful day I googled the right thing and it hit me like a truck: CP," she adds. "I knew it was CP since Hart was a few months old. I just knew."

"Jim is unaware of any such diagnosis and, if it is even true, it is completely unconscionable and absolutely disgraceful that Meghan would announce this on social media without discussing it with him first," Edmonds' rep Steve Honig told PEOPLE at the time.

In response to Edmonds' claim that he was "unaware" of the diagnosis, King said in a statement to PEOPLE, "Jim's statements are untrue and I refuse to address them further."