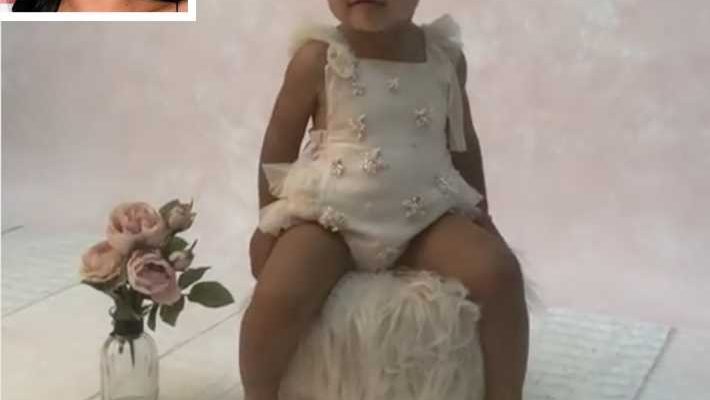 On Friday, proud mom Kylie Jenner shared a sweet video of 16-month-old daughter Stormi trying to say her own name — and the name of her cousin True.

In the footage, Stormi proves she’s taking after her model mama as she poses for a photoshoot, wearing a cream-colored onesie with ruffles and pearl embellishments.

In the background of the video, a voice that appears to be the photographer can be heard asking the baby girl, “Can you say Stormi?” The little one replies, saying an abbreviated version of her name while smiling up at the camera.

“Nononononoooo how is she so good at this!!” Chrissy Teigen commented on the post, while the Revenge Body host, 34, replied, “She’s the cutest.”

Jenner’s sweet video comes days after Stormi — her daughter with boyfriend Travis Scott — was hospitalized due to an allergic reaction.

The Keeping Up with the Kardashians star revealed on her Instagram Story last week that Stormi “spent the day in the hospital” on June 2 after “an allergic reaction,” but that her baby girl was “100% okay now.”

“Nothing else matters when these things happen,” Jenner wrote at the time. “God bless all the moms with sick babies. I’m sending so much love and positive energy your way.”

A source later told PEOPLE that the incident seemed to be “a food-related reaction,” adding that the mother of one was “very scared, of course” for her daughter’s health, “but Stormi is fine.”

“Kylie was told to watch Stormi closely,” the insider added. “She is taking Stormi to her pediatrician for a follow-up.”